For the benefit of any perhaps bemused readers, the title here does not imply that G4F has branched out into musical production , in alluding to that unforgettable ditty penned by Con Conrad for Ginger Rogers, but is a reference to the three 18 hole courses, Europa,Asia and Americas to be played by some 15 golfers over six days in Sunny Spain over the week of Monday 4th to Saturday the 9th of February. 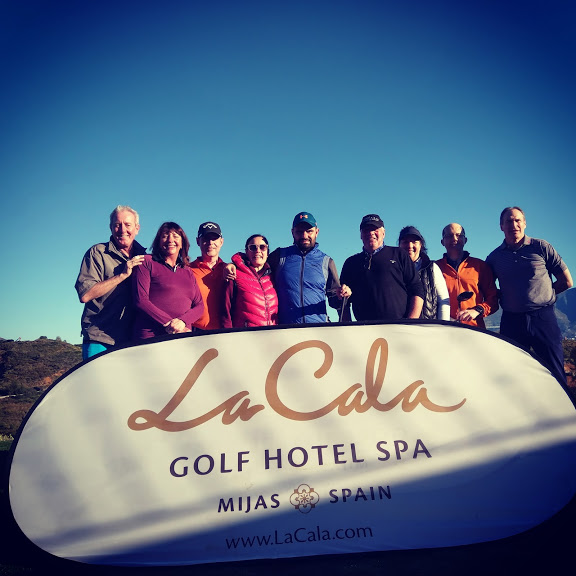 You notice that I underline the word Sunny, as we were truly blessed, having endured arctic conditions when we visited Marrakesh in 2018, this was truly wonderful. Honestly we did not see a cloud in 4 days!

Dawn and I, together with Carlos and Irene had travelled as an advance party on the Saturday with the rest of the group following on the next day. Our flights were all on time, and we and our luggage all arrived safely in Malaga around midday. Whilst C and I went to collect their car hire, Dawn and I found our La Cala transfer minibus organised by reservations manager Cristina from the resort.

An easy check in process, with the added bonus of being informed that we were eligible each day to a free hydrotherapy session in the spa. Nice touch !

Our room had all that one would expect, and more, with the essential kettle for that morning cup of tea,sadly missing in many hotels these days,and with our room situated on the corner of the north wing,we had a huge wrap around terrace overlooking parts of courses Asia and Europe. 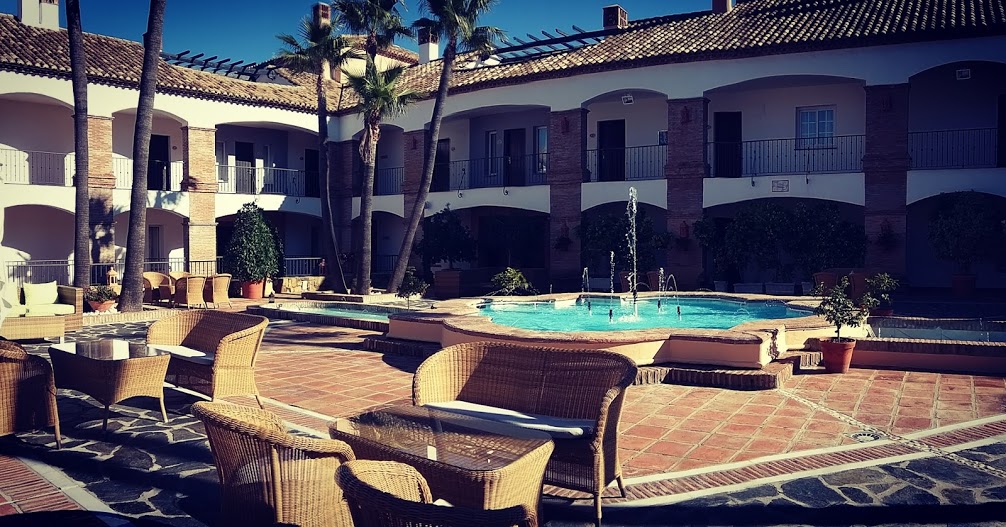 Tonight’s culinary experience was supplied by an establishment that specialised in cuisine from the region in Spain that Carlos and Irene are native to,Asturias. The owner in a bid to avoid any uncertainty as to the fare on offer had named it Restaurant Asturias. Our table was booked for 8.00 pm and we arrived to find it closed. After some telephonic communication however the doors opened 15minutes later. If the name of the restaurant perhaps lacked imagination the same could not be said of the food – It was delicious – and the Octopus was to die for!

The bill was a surprise also , coming in for around the same price as two rounds of G+T in some bars around Zürichs Bellevue.

Sunday,and whilst the rest of our golfing group were in transit we were getting in a cheeky round on course Americas. The golf club staff were very helpful and at 11.45 am we found ourselves standing on the men’s first tee some 100 meters above the fairway – What a sight !

We soon came to learn that the pace of the greens was speedy and the roll on the fairways had to be taken into account, and there followed a relaxed 4 hours of golf before we settled down to a post round drink on the terrace of the club house that afforded us views over course Asia bathed in warm spring sunshine. 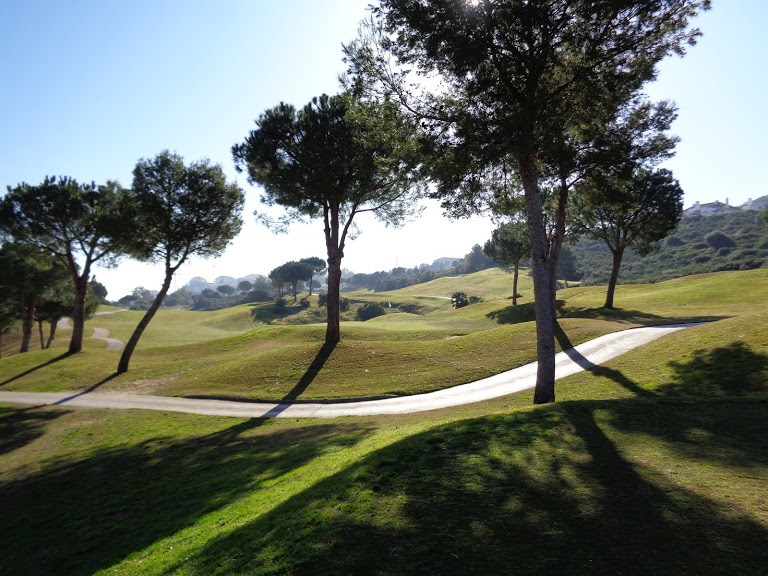 At this point I would like to give a big thumbs up to the serving staff who over the course of the week made us feel very welcome , with efficient and pleasant service. Another plus was that we could leave our clubs in a secured room, meaning that we did not have to lug our gear back and forward to the hotel after each round.

Back to the hotel, and in reception we were greeted by the rest of the G4F contingent who had just arrived from snowy Switzerland.

This evening we were eating together as a group in the hotel restaurant La Bodega which serves a mean tapas menu with a selection of reasonably priced wines. Spirits were high among the tourists , aided by the constant reference to various weather apps that just showed wall to wall sunshine forecast for the week.

Over the next six days we were to play courses Europe, Asia and Americas twice in that order with tee times at a sociable 10.00am each day.

Every morning we would breakfast in the La Terrasse restaurant, where here also the staff were great. There was freshly squeezed orange juice available, and the added extra of an omelette station. Luckily one thing missing from our hotel room was a set of weighing scales. 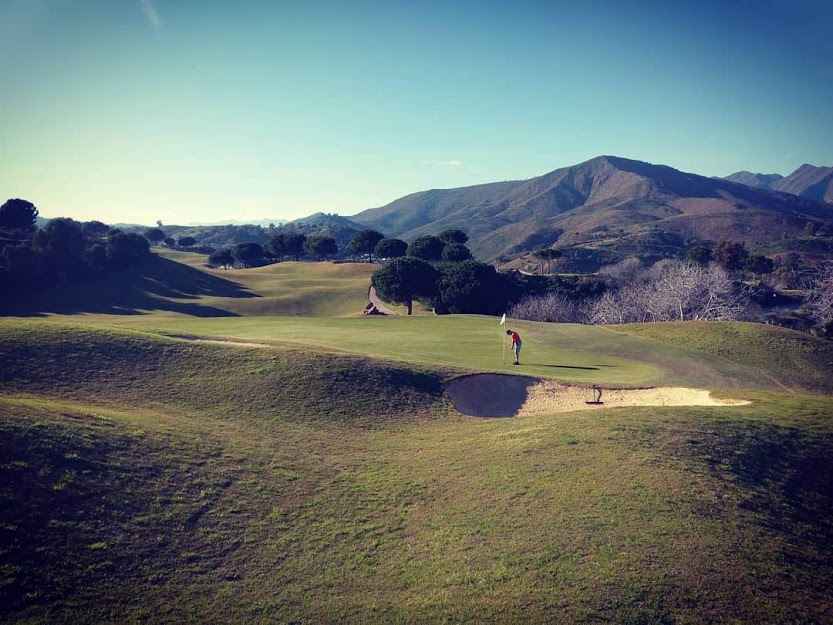 So Monday arrived with a spectacular sunrise, and today course Europa. There was still a chill in the air first thing and the wearing of a fleece was required. But as the week progressed it did warm up to the extent that shorts could be worn on four days, and the sun was of an intensity that the application of some Ultra sun protection cream was needed.

Course Europa has a significant rise and fall in it elevation, and as such only petrol driven buggies are provided as the more traditional electric varieties would run out of juice. The first tee sounded similar to a weekend go cart meeting ,and from time to time the vehicles would back fire , all very chitty chitty bang bang .

The course warranted some course management and the big stick could stay in the bag for a number of holes. The greens were again fast and tricky to read. First days scoring seemed fairly good amongst the group,with a few birdies on the cards . Good to know we would get a second crack at it Thursday, and that the guys on the courses boundary were there to replenish ones lost golf ball count.

That evening most of us ventured into the nearest village on the coast , La Cala de Mijas, around a Euro 17 one way cab fare, and ate at the family run restaurant El Cortijillo, where some of us sampled a very fine seafood paella. 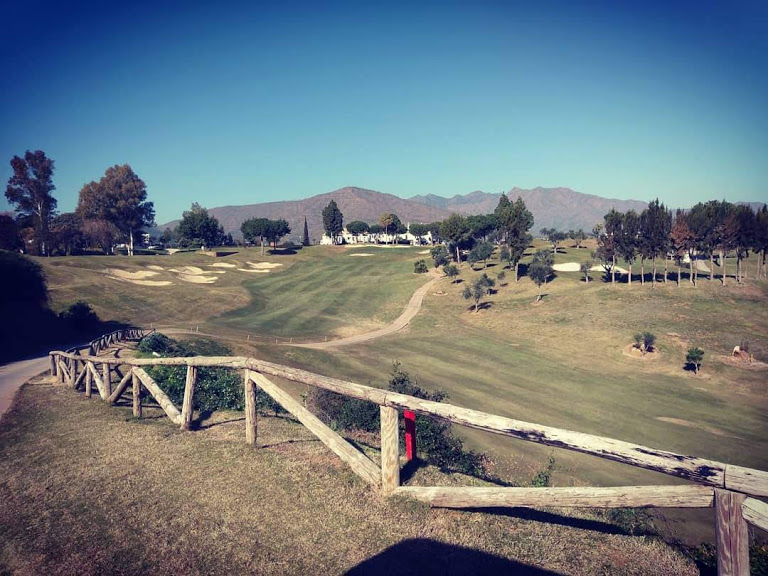 Day two and course Asia – Buggies were powered by a greener technology and a lot quieter. First tee and we were facing into low sun that made the first two holes a little challenging. This is not a long course , but again has a degree of changing elevations resulting in some undesirable roll off. You could thing you had played a good shot only to discover that you could not find your ball. We christened one of the par 4s the Bermuda triangle .

Following today’s round Dawn and I decided to check out the spa. Sauna , steam room, outdoor and indoor jacuzzi, swimming pool and the novelty Igloo room , where you could rum ice crystals into your sauna heated limbs – Different .

Wednesday , another turquoise sky and course Americas. Today would prove to be the slowest round of the week mainly caused by a very slow four ball at the head of the course , no one though from G4F was in the dock for that one. However in the Spanish sunshine it was no hardship. Scores amongst the group were picking up and there were already some inter marital rivalries hotting up. Mostly I have to say in favour of the fairer sex.

Thursday day 4 and back to Silverstone – oops sorry Course Europa. The guys on the boundary had a good day and some of us were replenishing their stocks at the same time. Vroom Vroom ! 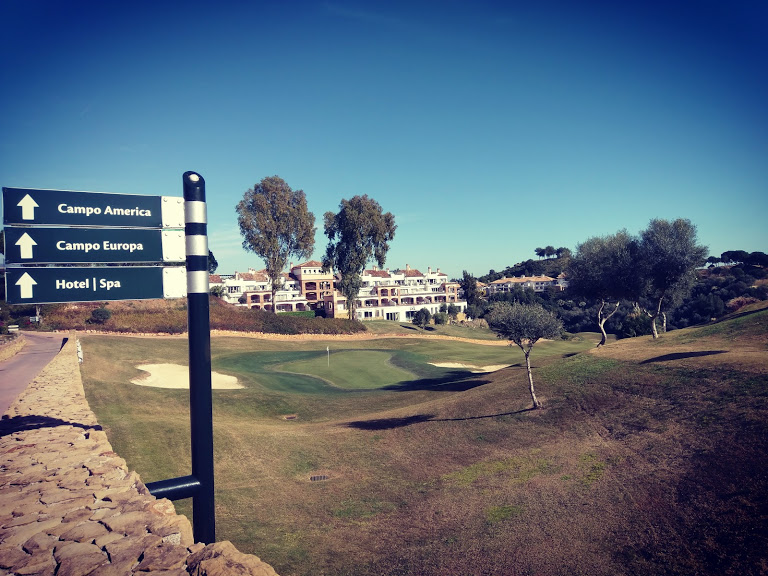 The mercury by now had risen to levels that meant by the second hole of Fridays round on Asia one could go sleeveless. Today proved to be a milestone for this golfers other half , I will probably get ticked off for mentioning it here, but with a tally of 39 points on this testing course , I believe I am justified in doing so. Today we were also joined by Cal and Colette who are lucky enough to have a bolt hole down here, and it was good to see both of them again.

Curry night for some of us this evening , whilst another party went to sample the delights of restaurant Albahaca . Quite a hit I was informed and recommended.

Last day , and a final round on Americas . By now the group were fully in their stride and the birdie count was stacking up. There was a slight tinge of sadness putting out on the 18th green but it had been a glorious week. 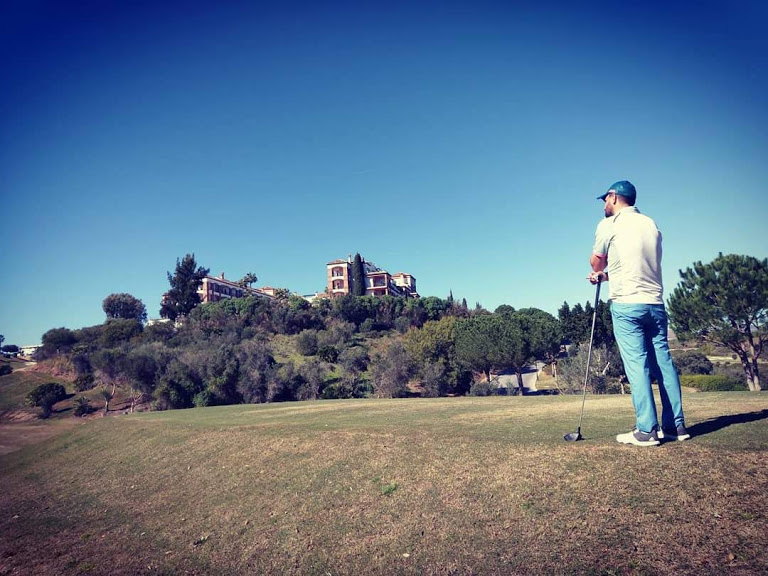 Being our last night , we all dined together , this evening at restaurant Vente El Jinete just minutes by car from the resort hotel. We were not the only group in this evening and we were placed next to a table of some very excitable UK tourists, making themselves known with the usual banter and a rather unusual survey being conducted on Brexit. Still at least they were keeping it clean, I did however feel slightly sorry for the couple nearby trying to have a romantic dinner for two.

This had been a marvellous weeks golf spent in the company of friends at a delightful resort, and I would recommend anyone to visit. Nora has managed to negotiate sponsorship again from La Cala for this upcoming season and so two lucky winners will get the chance to sample its delights in February 2020. 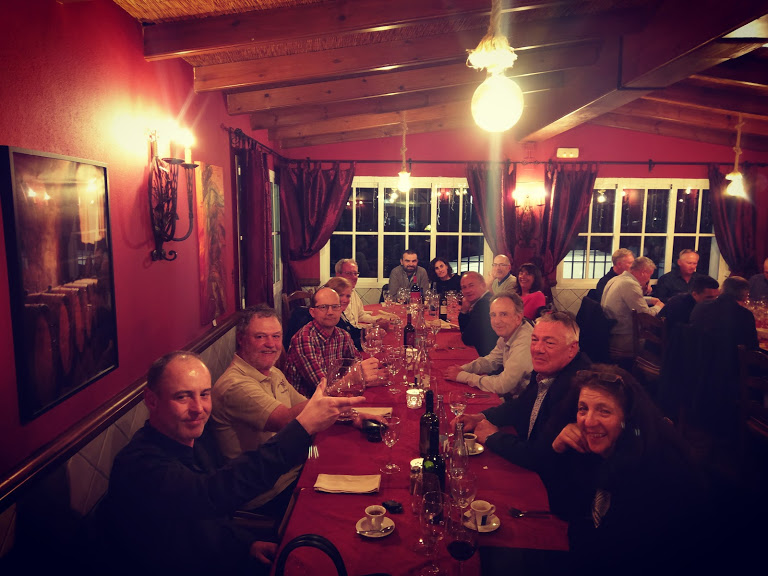 Thanks as always to Nora for the organisation, and should any of you golfers out there want to sample foreign climates this year check out www.golf4fun.ch for details of up coming trips.