It’s been more than two weeks since around sixty G4F members descended on the 36 hole golf complex of Waldkirch near St Gallen. During this interval I have managed to gain a year in age, catch a cold and, despite numerous attempts, failed to win Euro millions with the jackpot now passing the Euro 200 million mark.

The 16th of September saw Dawn and I load up the car with enough equipment and clothes that could have kitted out any reasonably sized Trans Siberian expedition, with every possible weather condition catered for. We were setting off a day early to practice with some friends and staying overnight in St Gallen.

The sun was actually shining which made a pleasant change to the almost continuous rain and cold that Switzerland had been experiencing over the previous week or so.

The local farmer, it would seem, had been expecting these conditions to prevail, and as we stood on the first tee of the green nine the air was heavy with the fumes emanating from the animal effluent that had been sprayed onto the land in an attempt to boost the nitrogen levels of the soil. The resultant odour was somewhat distracting. 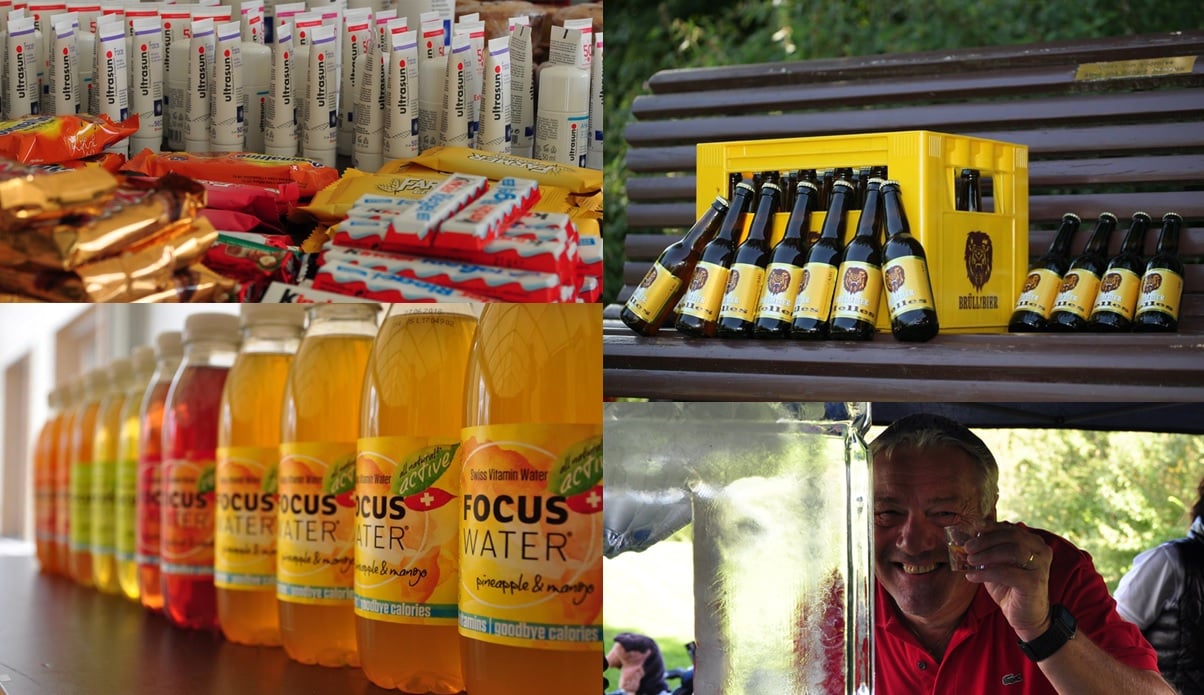 Our practice round progressed fairly incident free, but with one useful pointer gleaned for the tournament round to come on the morrow –The ROUGH!

Whilst from the tee it looked fairly innocuous, it was as it turned out a black hole for any golf shot that found it, and the O`Sullivan rule of always playing a provisional was to be wisely adhered to.

After a pleasant evening at a local Italian eatery and sound night`s kip the morning of the 17th saw the overnight rain move away and Gods golden orb rise above the mist.

Tee times for Dawn and I were quite civilised and allowed for the partaking of an unrushed breakfast, a gentle drive to the club without the need to break any land speed records, a deposit of 5 francs each into the birdie pot(which in the end turned out not to be refundable for either of us), and a warm up on the range, before making our way over to the first tee on the blue nine, where we were greeted by Bettina, our official starter for the day. 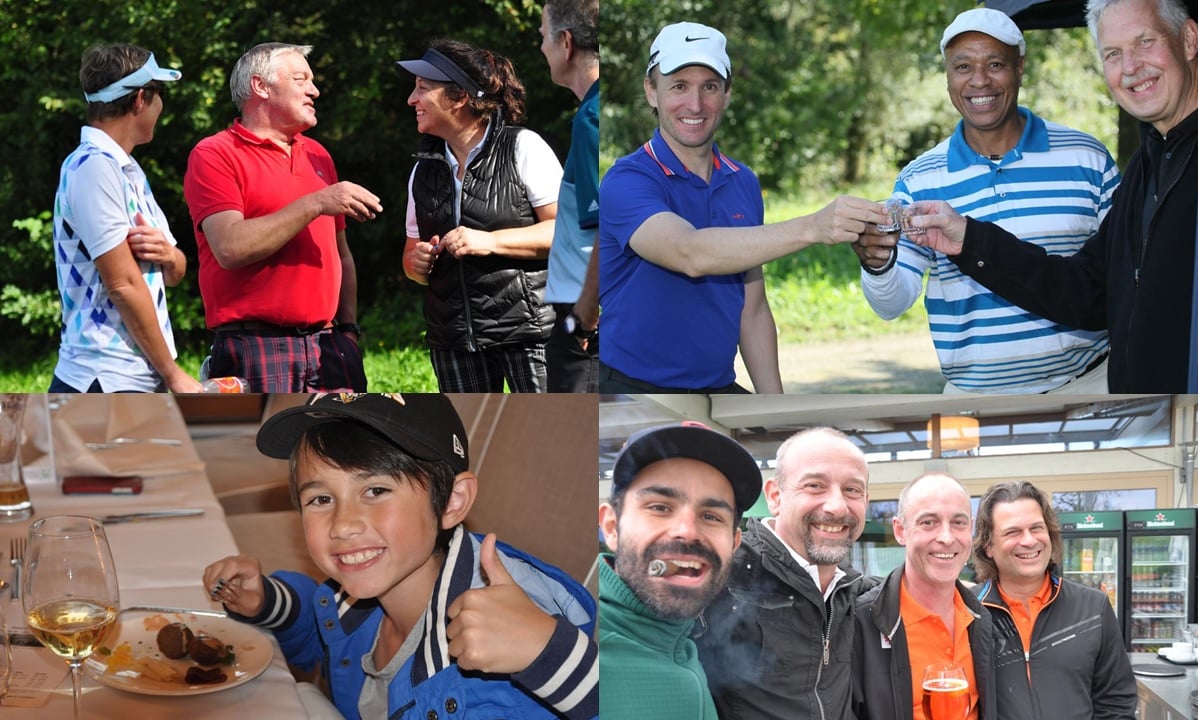 Also on the first tee we were to pick up our mid round snacks as well as the goodies from Focus water, ultra sun and Stamford. Our culinary desires were to be satisfied by those delicious pies from MMM Sausages. My personal favourite are the steak ones. Yummy.

The opening hole is a fairly straight forward dog leg left par 4, complicated by a rather impressive arboreal structure (Tree) planted in the middle of the fairway. The tree and I are old friends, and so it was with relief that my opening tee shot did not result with my ball making contact with any bark. Was it to be my lucky day? Second shot, second hole answered that one as my Titleist Velocity sailed into the out of bounds.

Third hole was longest drive with my effort not remaining on the fairway, whilst that of my female playing partner Siegrun, did, and was to  eventually proved to be a winner. The men’s competition would be won by Strahil. 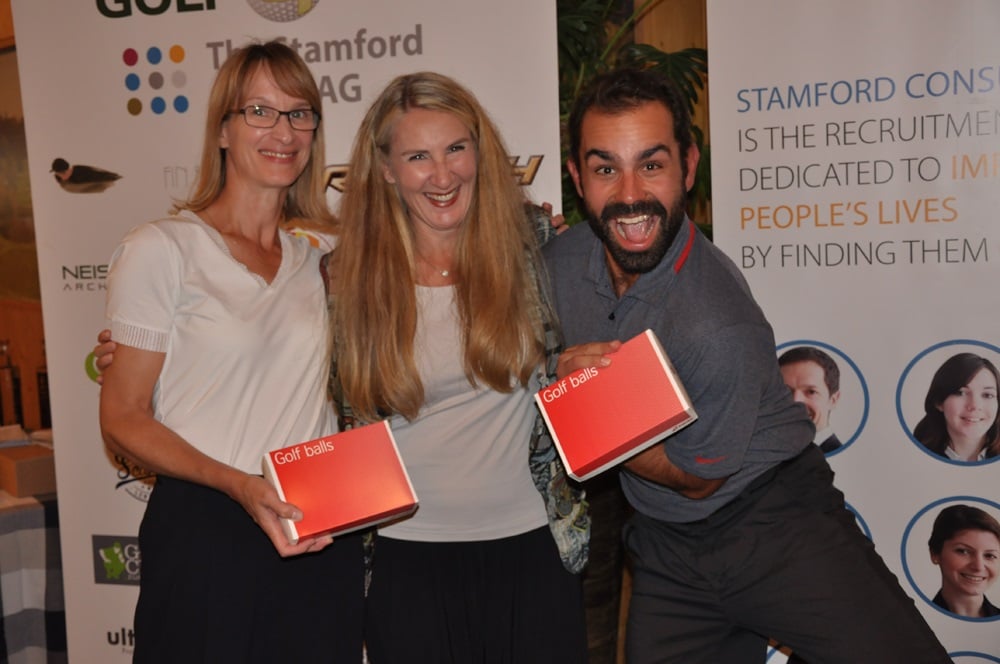 The ninth and nearest the pin, we all managed to find the dance floor, a fair achievement as this golfer had up to then not been scoring well. The third player in my group, Tim, had struck a sweet shot resulting in a winning 1.69 meters from the pin —We won’t talk about the birdie putt.

Back nine and the red course. The fifth here was the designated challenge for the hole in one competition, and my effort did not even threaten the green let alone the hole. The day concluded with the Raleigh E bike being wheeled into mothballs for another winter and hopefully they will wheel it out again in 2018.

The sun continued to shine, but the cloud cover was starting to increase and a chippy breeze was getting up, as we crossed the road to complete the last three holes. Despite the overnight rain the smell emanating from the surrounding farmland had failed to dissipate and passing by the 9th on our way to the 7th a group of those that had finished could be witnessed distracting themselves from this sensory interference courtesy of Engine Gin. 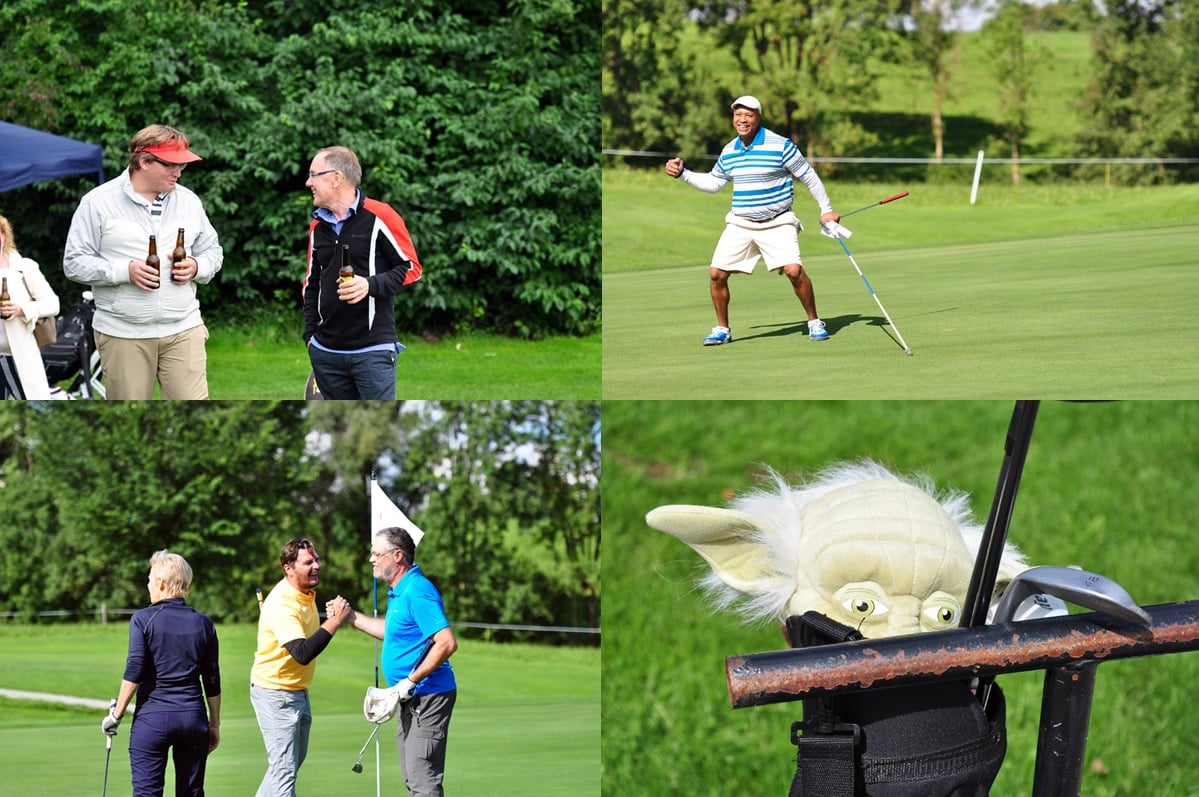 Maybe it was the prospect of some mothers ruin or perhaps a cold beer that made me rush the last three holes, as they were not my finest. Losing two golf balls on the Par 3 8th —OUCH!!

Being designated driver I passed on the gin that was being served from an ice block with a twist of orange peel—delicious apparently. I settled for a cold one generously donated by Brüll Bier. A number of these delicious brews are available also at Golf Point Urdorf!

Off to shower and change using the fine facilities of the Waldkirch club house, and time to reflect on the day.

Up to now the G4fun force field had kept any inclement weather in the area at arm`s distance. Perhaps weakened by the amount of Juniper juice being consumed around the last green, there was a flash and a roar as Thor announced his arrival to the party, the heavens opened forcing a number of groups still on the course to curtail their rounds.  Temporarily as it transpired as the storm passed by and the sun reappeared allowing everyone to finish.

One of the groups behind us had been Dick and Michael who were playing their final of the seasons individual knockout (That is Knockout Nora!!) competition. What I am told had been a closely fought match, ultimately saw Mr Herden the victor after a strong back nine. Well played both of them. 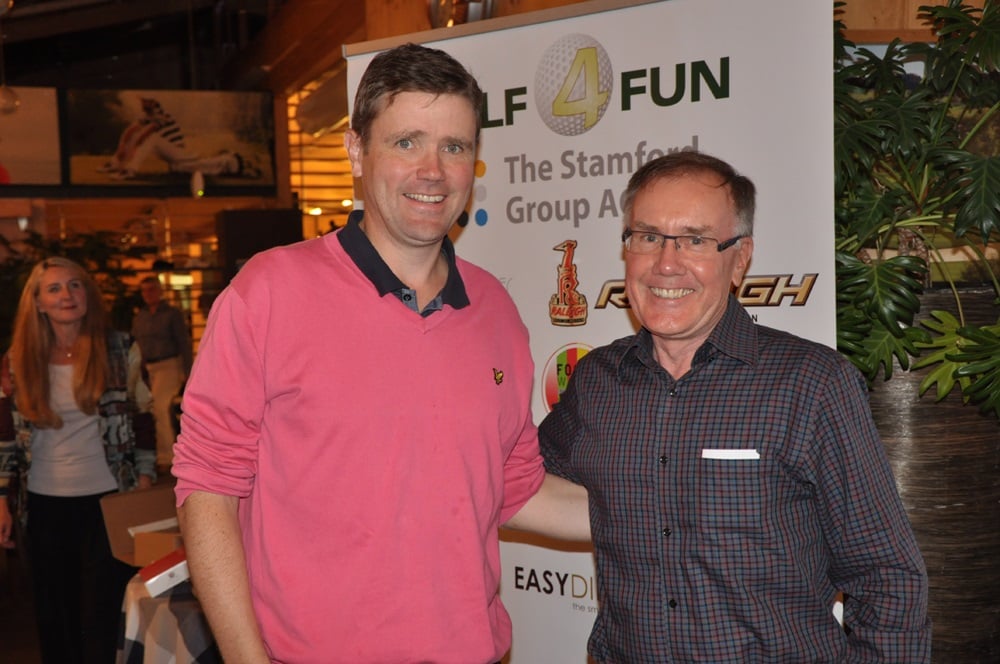 This year’s Apèro was in a different format to normal, and thanks to Stamford, we were to be treated to a three course sit down buffet. The idea proved to be very popular and the food was delicious, with the kitchen staff and waiters doing a grand job.

Prize giving — and quite a marathon for our MC Nora to get through with the day`s awards as well as those of the season, and to top it all the end of season raffle with the top prize being a week of golf staying in a fully inclusive hotel in Marrakesh for next February.

There was a heart warming moment when there was a presentation awarded to young Euan, playing in his first G4F tournament, and he received a huge round of applause as he accepted his cornucopia of golfing goodies. A star in the making perhaps? 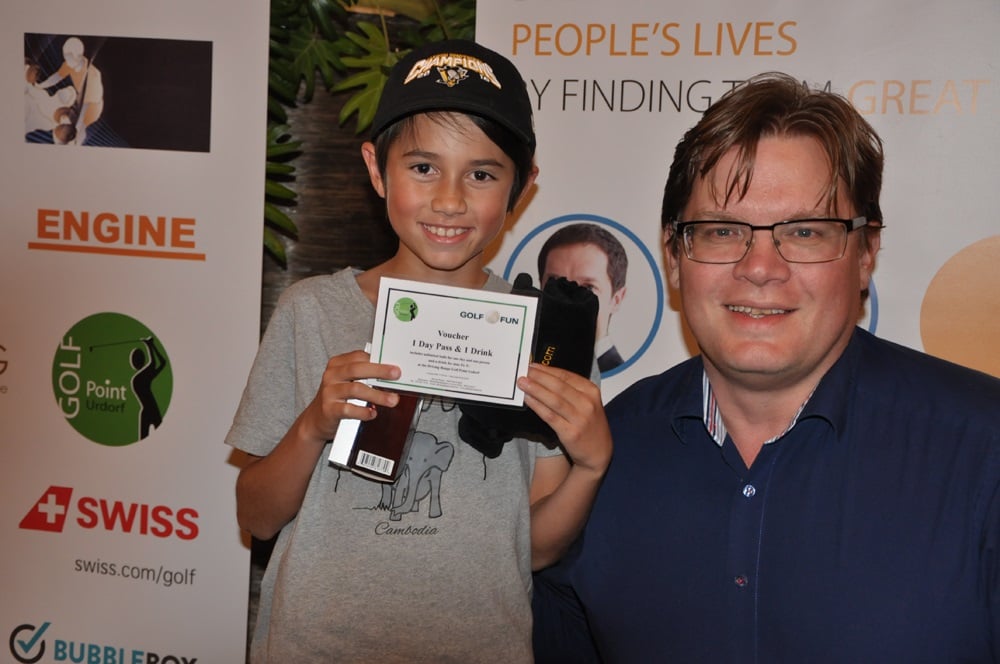 Congrats to his Dad Mark, for winning the Brutto seasons competition, to Dario in leading the Tigers board, and to top rabbit Marcos. Apologies for not mentioning all the winners but my boss thinks I am writing a report on Miffid II Brexit and its implications for the financial world and it would take up too much time, but congratulations all. 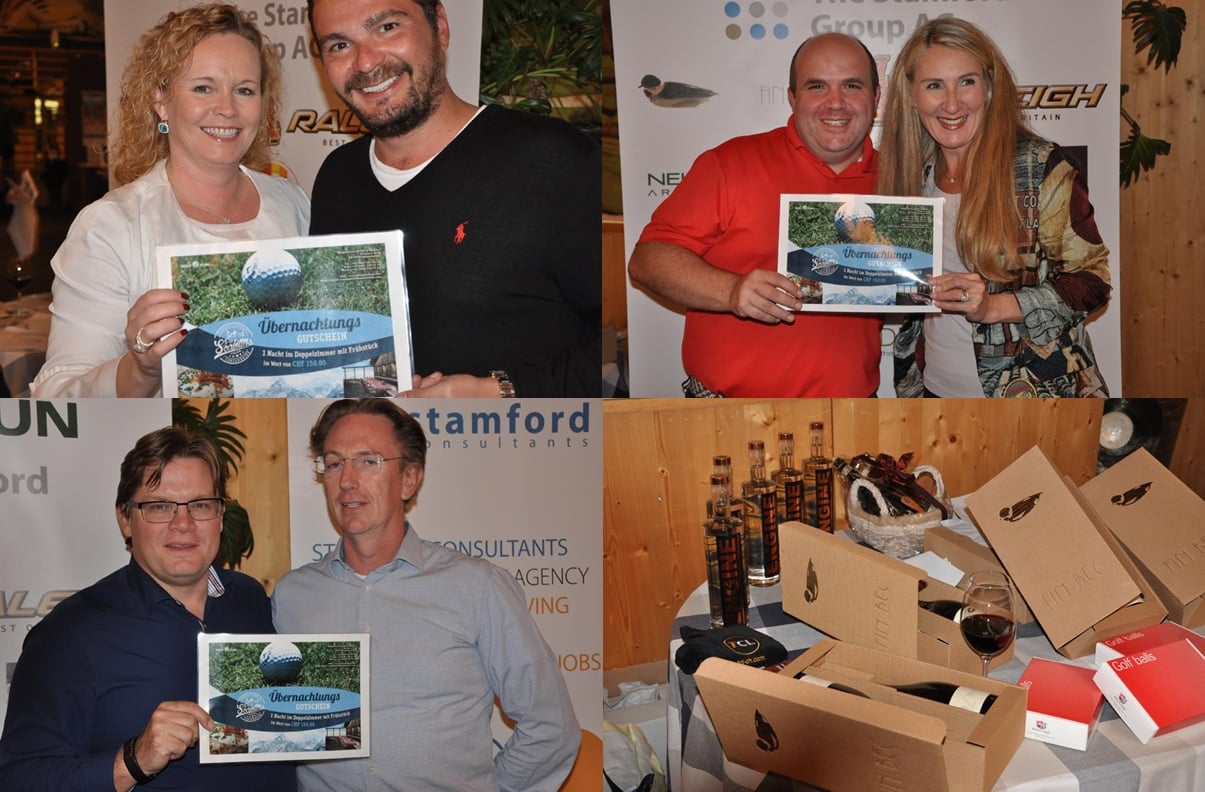 The raffle began and we counted down to the moment of the top prize winner announcement. It was as it turned out a special result as I had played with the recipient and as she would readily admit had not had the best day at the office, and so it was very rewarding when Siegruns name appeared on the screen. I will look forward to seeing, and hopefully playing with both Bill and Siegrun when G4F heads off to Marrakesh from 04th 11th February. 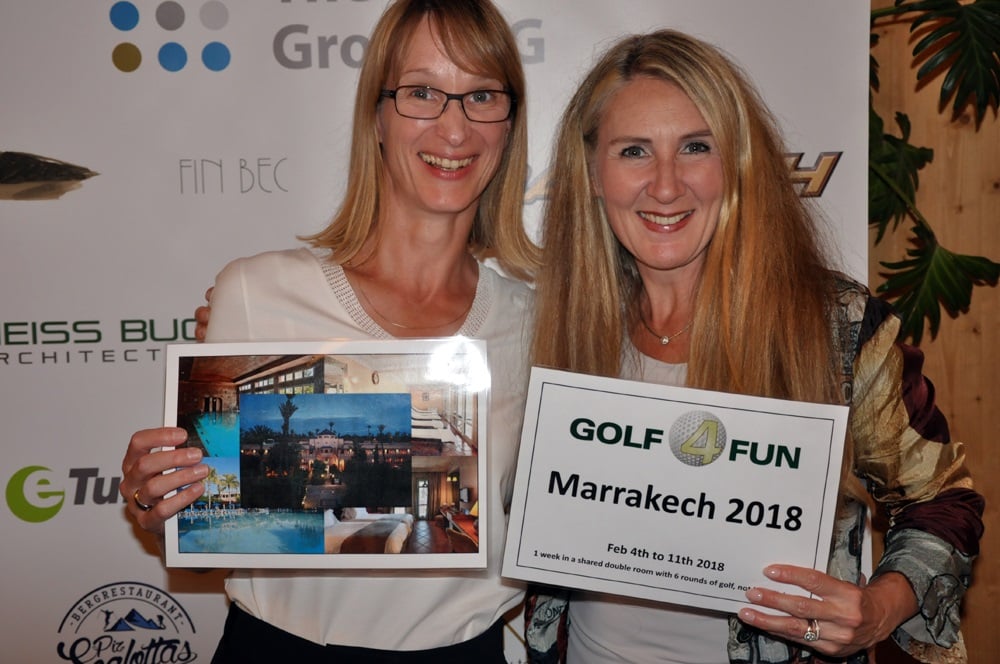 Before that though there’s still a lot going on in the G4F calendar. This coming weekend some of us are off to Crans Montana to play the Sevé 18 which recently hosted the Omega masters –Can’t wait.

Then there’s indoor golf, short game challenge, Racelette evenings and on October 26 a fun evening at VON FASS and Oxblood shoes who are hosting a whisky and cigar tasting. All details of upcoming events are available on the website www.golf4fun.ch  – simply click on “Community” for all the details.

The 2017 tournament series slowely comes to a close, and for me a rewarding one managing to go sub20, with many others also seeing improvements in their game.

None of this could be possible though without the continuing support of our sponsors and the tireless efforts of Nora (and Daniel), as well as the helpers Colette and Shirley, with the occasional guest appearance from Nata, Dawn, Roy and Siegi, who all ensure things run smoothly in different way.

I am sure all players  would all like to join me in saying a big thank you to all of them, and looking forward to seeing you all again when season 2018 kicks off on April 22nd at Steisslingen