WALTZING INTO SPRING WITH GOLF4FUN

Inspired by a trip last week to the apartments of the composer Franz Liszt in Budapest, I sit here scribing and reflect on the events of last weekend. Spring has definitely sprung with nature delivering a concerto of birdsong and greenery after a winter that seemed would never end. So it was with happy hearts that Dawn and I set off last Saturday to prepare for round one of the Golf4Fun 2018 tournament series.

Both of us had diligently worked on our game over the closed season, practising hard at the indoor facility of Golf Now near Rapperswil, where Frank and Astrid have developed a great set up, and who also had hosted the Ryder cup winter series for Golf4Fun, which I should mention had once again been won by that master of virtual reality Mr Paul Milner. 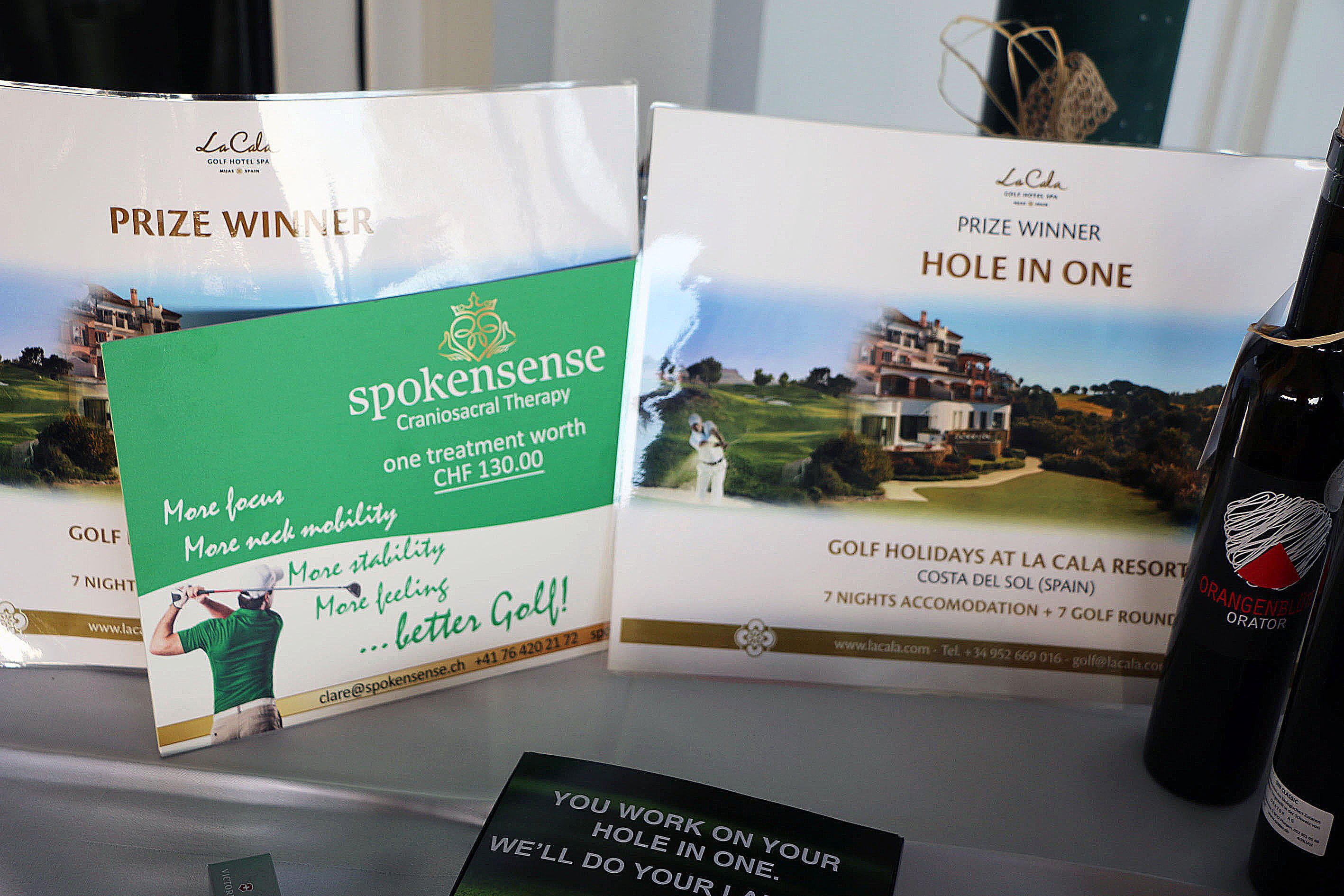 Time now for some real golf, and under blue skies, Dawn, myself and some other members set out to conquer that little piece of Scotland that is Steisslingen. Tee 1 — Out with the big stick, and a sweetly struck Titleist pro V1 sailed over the left bunker. Good start! Or so I thought. Once again, despite a short growing season, the rough was to prove deceptive. A small consolation in finding another ball, but despite the use of four pairs of eyes my effort from the tee declined to give itself up.

The practice round continued, with anything slightly off line being swallowed up by the course. My playing partners though were having better luck and it looked as though there could well be some good scores posted come the morrow. Unusually for April we could dine Al Fresco on Saturday evening and a glorious sunset indicated that both shepherds and competitors would be delighted at least with the weather for Sunday.

A large field of 60 had signed up for Sunday’s tournament, and it was good to see so many old acquaintances as well meeting some new ones. I was out at 10.26am and having availed ourselves of the goodies handed out by helper Shirley, which had been supplied by sponsors Stamford group, Ultrasun and Focus Water, our flight had local rules read to us by Andreas. Then we were off! 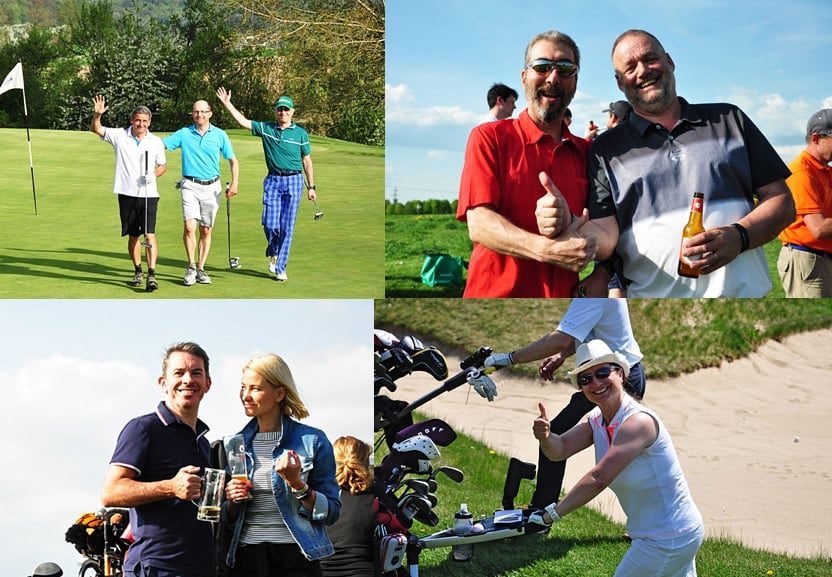 After a number of holes it became evident that the busiest club in my bag today was going to be my sand wedge. The sand though I must say was a delight to play out of. Maybe I should have packed a towel, laid it out, applied some Ultrasun, and caught some rays, as my attempt at playing golf was not exactly challenging the course record.

Mid round snack time , with helper Nata handing out that all important fuel to prepare us for the back 9 and the competition holes of longest drive , nearest the pin, a new one – Orators Aim aka nearest to the line and the prospect of a week in golf resort La Cala, Spain, should any of us ace the par 3 12th. This golfer was in no danger of either being long, or close to any of the above challenges.

However Alistair and Myriam out drove all comers on the 10th. Stephan gained immortality being closest to the line on the 13th and Mark managed to land 4.15 meters from the par 3 14th. . No one had to check their passport validity though on the 12th and we all get to have another go in Gruyere. Being such a large field it was a while before all flights had finished, and it was just after 18.00 cet when we all assembled on the new, although not quite completed, sun terrace of the club house. The kitchen had put on its usual fine display of fare, which was gratefully devoured by the hungry throng.

Prize giving and MC Nora was in full flow on the PA system. Looks like a busy season, with the individual knock out competition, Ryder cup against the Basel Baggers, this year to be played at Steisslingen on the Saturday before round 5 in July. There is also an added tournament this year, round 6, when we will make our way to the venue of last year’s competition against Basel at the charming Alsace Links course. Also running through the season for the slightly higher handicappers is a 6 hole mid week competition played at Otelfingen. Then there is our annual jaunt to Italy and Golf Club Pinetina for spring break in May to check out the lemon harvest for 2017 and play some great courses. And October will see the group visiting Sion once more to play Crans Montana and later the same month a week long adventure to Vilamoura with some great courses planned also.

Make sure to check out the new improved website for all details of these and other events over 2018.

So onto the winner’s enclosure, and first up Ladies Brutto with Nicole, Maria and Albena at the top, for the men it was Alistair, Mark and Kenny. Winners of the Netto Category I Mark, Alistair and Dick, Cat.II   Bob, Tim and Georg and in Cat.III Stephanie, Dario  and Arno. Also our very own future PGA tour player, young Euan featured up there and received a well deserved prize together with a huge round of applause from an appreciative audience. So good to see young golfers grow.

There was sweet justice as Patrick picked up the Match Manu prize, kindly donated by Neiss Bucher Architects GMBH. The prize giving table was literally groaning under the weight of all the prizes and the addition of an Apero Spritz placed on the top, unfortunately proved too much and ended on the floor.

Nora has once again come up trumps on the sponsorship front with some old favourites like Von Fass and Fin Bec Fine Wines proving popular as well as all the other sponsors including La Cala Golf Resort, Orator Distillery, Zurich Golf Centre, Swiss, Victorinox, Bubblebox, Europcar, and Oxblood shoes to name just a few, and a full list can be found on the website.

Astonishingly, due to some early leavers I found myself the recipient of a voucher for Cranio sacral therapy courtesy of sponsor Spokensense.  Quite handy as my right shoulder has been giving me some jip recently. A fun day was had by all, and as always a huge vote of thanks to our hosts Steisslingen Golf Club, to the staff and the kitchen. Also to our helpers Nata and Shirley, to Edith for being today’s official prize giving photographer, and of course to Nora for all the admin, organising and general damage control.

Hopefully the music playing for Round 2 will be playing for this Tiger, as long as it’s not Mr Liszt’s Totentanz.

See you in Gruyere! 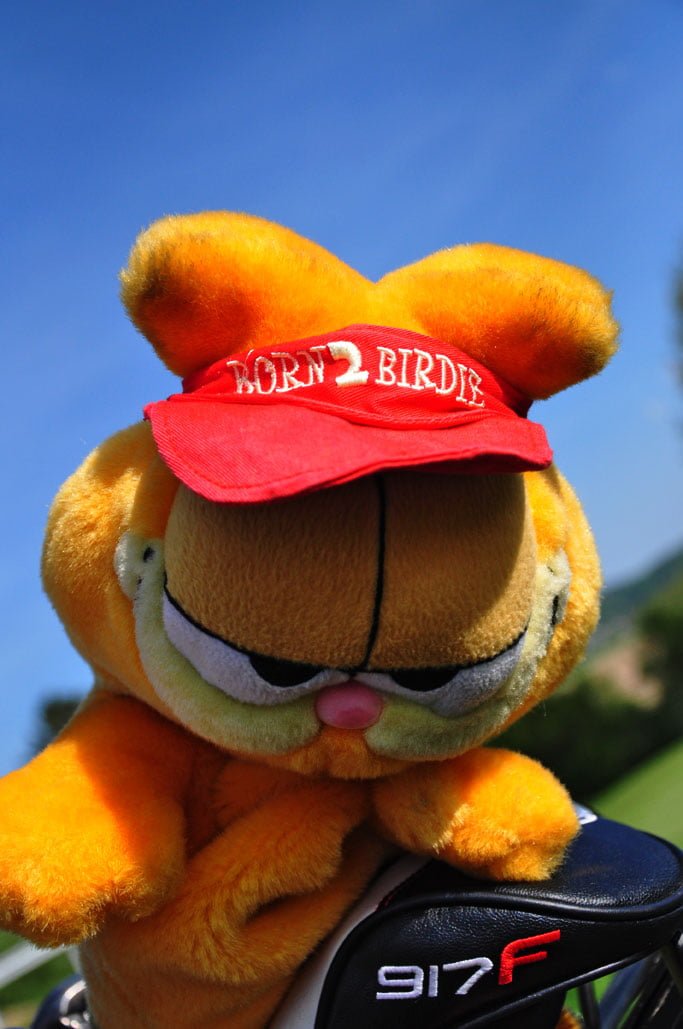