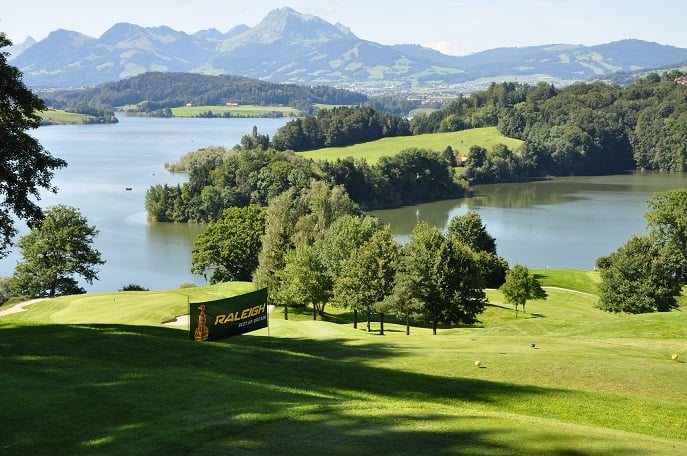 The opening hole at Gruyère is perhaps one of the most panoramic vistas ever to grace a golf course, and this year with the fine weather we could actually appreciate it, as those who played in 2013 will attest to. 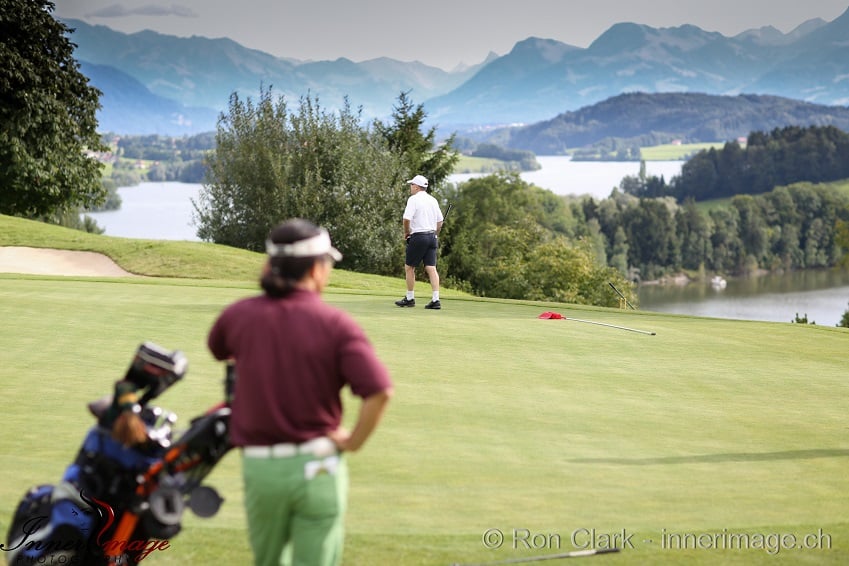 It has been calculated that the odds of achieving a hole in one are 8606 to 1 and so with a better chance of winning an electro, kindly donated by Raleigh, than scooping either the Swiss Lotto or indeed Euro millions I felt confident hitting a 6 iron off the first. There is no better feeling than finding the sweet spot on a golf club, and for a moment the ball hung directly over the flag before ending 3 metres short on the fringe. An encouraging start none the less.

Golf as we all know can be a great humbler and as I walked off the second green I knew I had been well and truly humbled.

With all the rain that had fallen over July and August the course was certainly juicy and I was slightly concerned that my golf shoes would not provide the required grip. 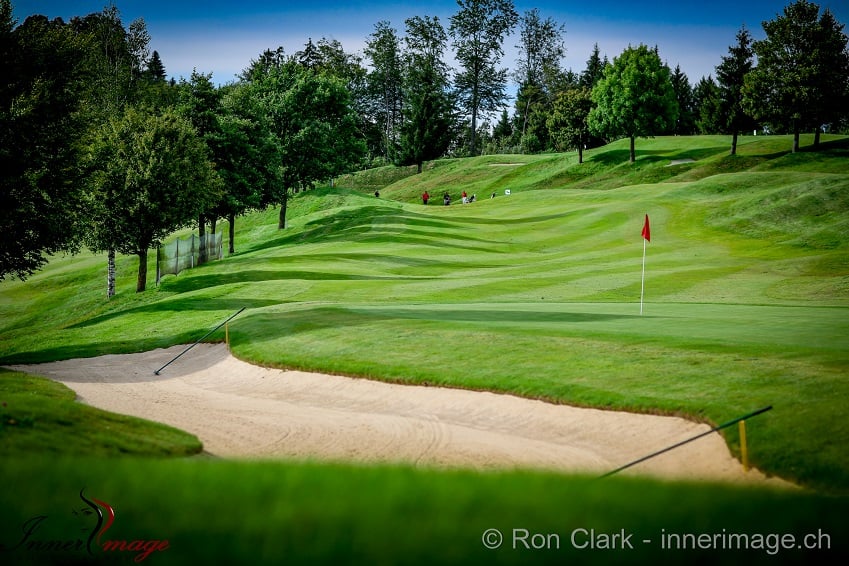 For those of you, not appreciating gratuitous product placement, please skip the next paragraph.

My Allen Edmonds , Muirfield Village White/Green Crocodile Leather golf shoes purchased with a 15 % discount for Golf4Fun members certainly did not disappoint, even with some challenging lies the ground never felt like slipping from underneath me. Members may be interested to know that there are 3 pairs of similar shoes being offered as prizes, kindly donated by the sponsor Oxblood Shoes of Zürich, at the raffle to be held at this season’s final.

Anyway, back to the golf and my round was not progressing as I would have liked, although I had limited myself to the loss of only one ball, a magnificently hit drive on the daunting fourth straight into a natural hazard namely a huge bush shaped tree.

Soon we were at the eighth and the nearest the pin challenge as well as the mid- round snacks thankfully supplied by Evelyn (Koru Lounge)– Delicious!

The flight ahead of us were already down on the green and we could see our eventual overall winner Ron (50 points! ) had plugged one just a metre away from the pin to what would prove to be a prize winning distance (he missed the birdie!). My fate would await me in the drop zone.

The sun continued to shine and, after a strong talking to, my driver eventually became my friend resulting in some better scoring, and it was not long before we were at the longest drive 15th.

Mark B had already thrown down the gauntlet despite having to play with a substitute set as his own clubs were somewhere over the Atlantic in transit from the United States. Mark R, in my flight, had other ideas, and was surely up to the task as he had been striking the ball like Rory M throughout the round and sure enough he boomed one down the middle to become the day`s longest drive victor- A joy to behold! 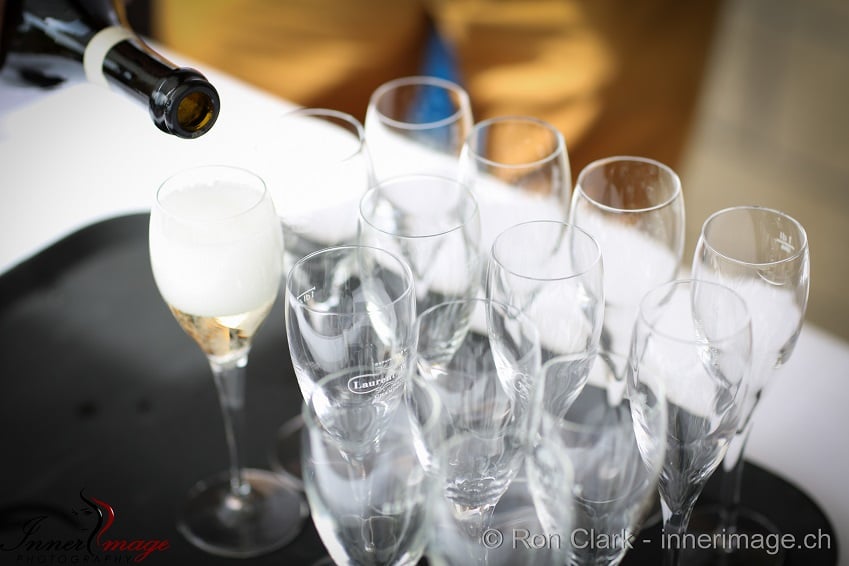 After a welcome post round beer I joined Ron, doing his David Bailey thing, as well as Dawn who was timing in the remaining flights. It was then Apèro time!

The Gruyère Golf Club kitchen once again outdid themselves and alcoholic refreshment was supplied by another of the sponsors Fin Bec wines, with their Johannisberg proving particularly popular with this golfer especially as he was not driving.

Prizes given and to the victors the spoils, as the sun began to set members departed after what had once again been a great day`s competition, which was made possible thanks to the organisation from Nora with the help of Dawn, Evelyn and our starter Guillaume, as well as all the assistance from the club.

So it`s Au Revoir to Gruyère for another year and Willkommen to Waldkirch for the season’s final in September. Hope to see you there. 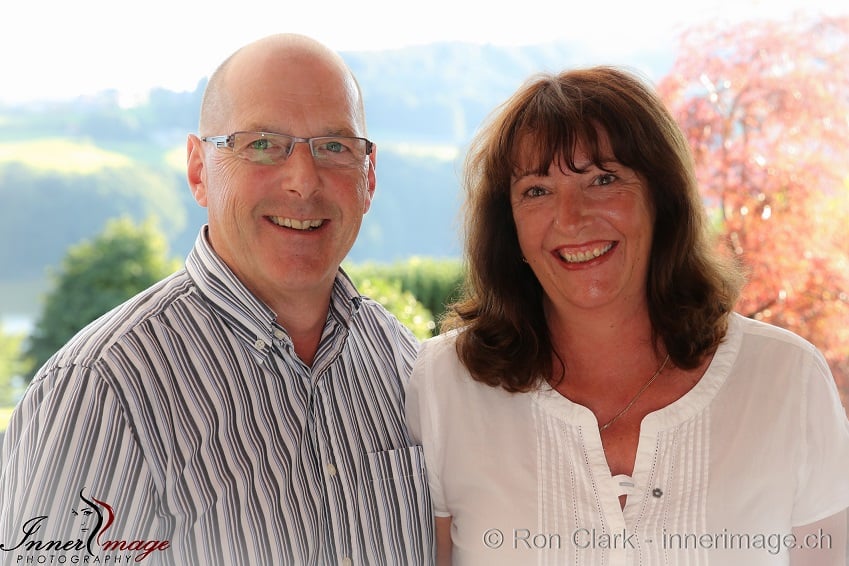