Sportsfest Steisslingen – Round 5 views and reviews 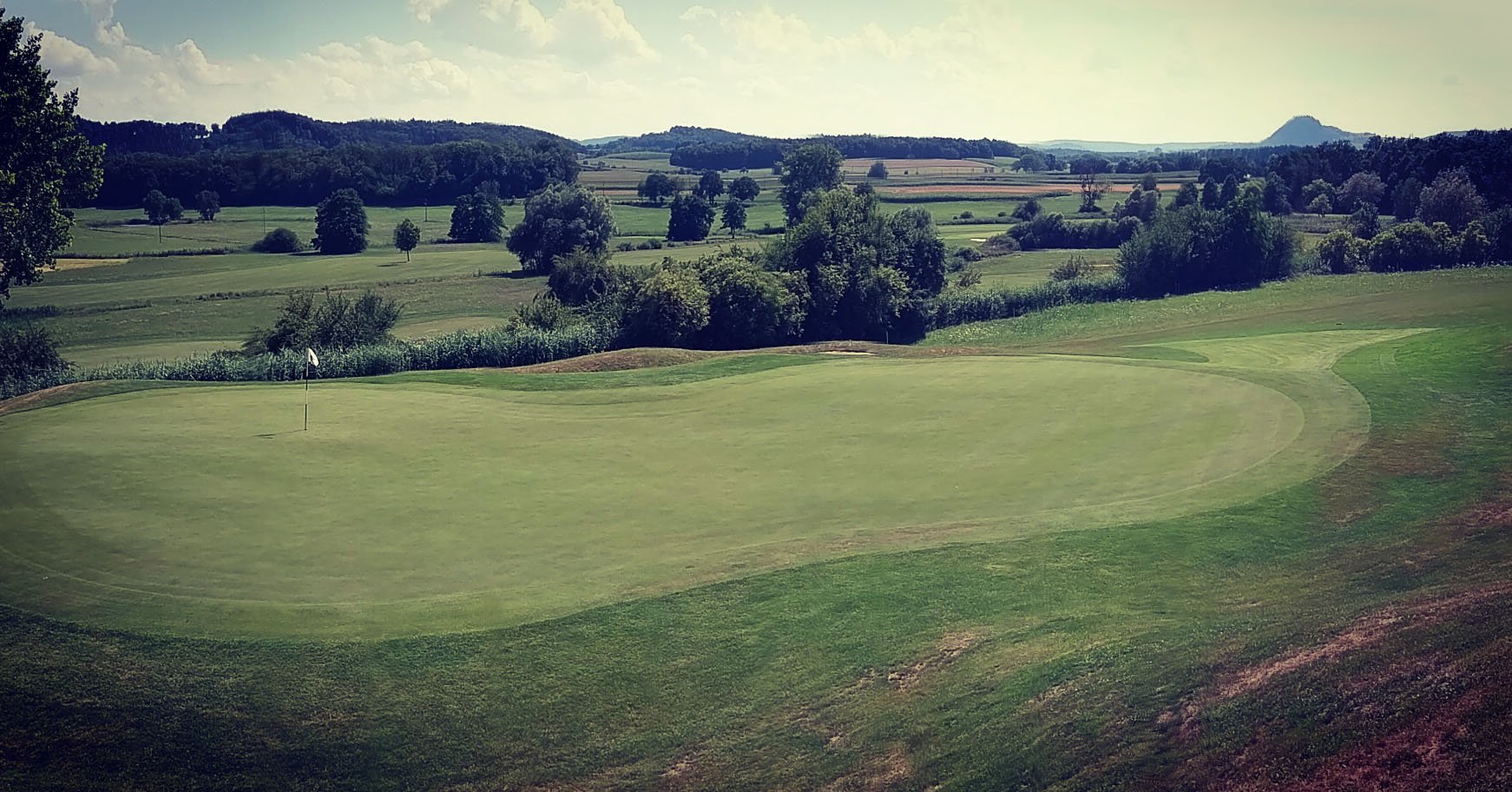 What with the soccer world cup, Wimbledon, Scottish open golf, Formula one racing, round 5 and the Ryder cup it was truly a weekend of potential sporting history in the making. The Ryder cup in this instance though not being the one to be played over Le Golf National course timetabled for September between Europe and the USA, but the annual tussle between Golf4Fun and the Basel Baggers, with this year Golf4Fun looking for pay back  following last year’s drubbing in Alsace.

By some miracle I had been chosen as a player in the Golf4Fun squad and it was unfortunate that the Baggers were unable to muster a larger team allowing more hopefuls from our side to participate. An 8.00 am start on the Saturday meant that most players travelled up the night before and ensured a minimum of over indulgence. Saturday morning and with the sun beginning to appear through some dissipating storm clouds, there was the prospect of a perfect day’s golf ahead. The morning match play pairings saw Golf4Fun taking a lead. Sportingly, I managed to lose my match on the 18th ensuring that the Baggers had an outside chance of retaining the trophy. I can happily report that this was not to be the case, with the Golf4Fun squad being victorious by a 6.5-2.5 margin. 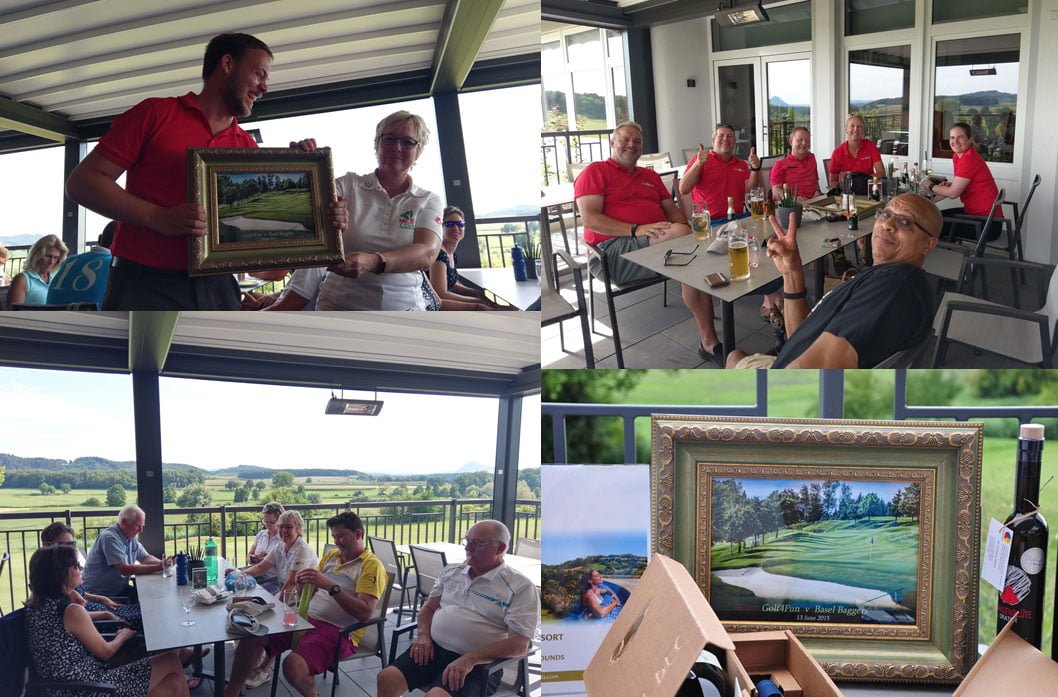 Much thanks to Alex for his inspiring captaincy, and dealing with an assorted number of mini administrative headaches both before the competition and on the day. England at this time was managing to lose to Belgium, in the game that no one wants to play, in the World cup. Still after the overall performance of the English squad bring on the Euros 2020!  Over the last few months the golf club at Steisslingen has invested in an extension to its clubhouse terrace and has begun to open in the evenings as a restaurant, and so I and some other Golf4Fun members decided to book a table for the Saturday evening. Perfect location, perfect weather, and perfect company although those German portion sizes proved to be a digestive challenge.

Sunday’s weather looked like a carbon copy of Saturday, and today due to school holidays and various global sporting events the field for round 5 was slightly smaller than normal. Sponsors goodies were being administered by Shirley, whilst the role of official starter had been given to Hein, who was running a tight ship today and ensured that all the groups were out on time. 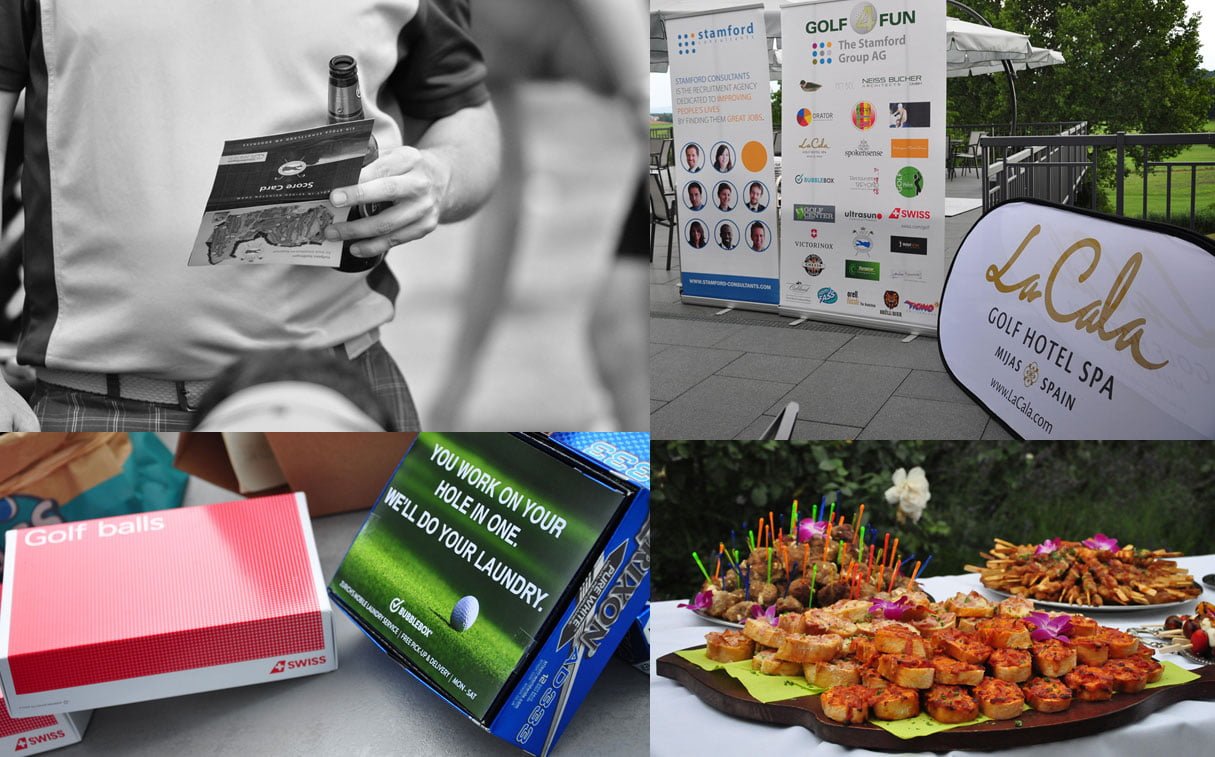 Today I was playing with Mr Maple leaf David and Carmen. Despite some time looking for errant shots we fairly galloped round the front nine — Scores though was not going to see any of us challenging to qualify for the upcoming British Open at Carnoustie. Inside the club house and out of the heat to be served mid round snacks from Shirley and then it was off to face the back nine and its string of individual completion holes. Longest drive on the 10th –Jonathan 251m and Nora 179m.  Hole in one 12th and that week in La Cala still go`s begging. Nearest the line at 1m 62 cm, on the 13th, our Ron.  Nearest the pin on the 14th, and well, what can I say, the highlight of a miserable round, although I did think that 3m 14cm might have been bettered. As it turned out, it was good enough. With the smaller field the groups came in thick and fast with no real gaps between flights. The new terrace ensured an appreciative gallery overlooking the 18th to see the final competitors finishing.

Apero time and the various dishes served at Steisslingen are always good, and they did not disappoint this time either. Prize giving, and there were some very dark cumulus nimbus beginning to gather and we had just a few spots of precipitation before the Golf4Fun force field diverted them. In the ladies brutto Nicole, Bea and Francesca with the men’s competition seeing Mr Trousers Jay ahead of Kenny and Alex.  Netto and Category one with an excellent 40 points was Kenny, category two and 42 points saw 50 meter birdie man on the 18th Timo take the prize there with runner up Bob putting in a good round on 41 points. Category three victory was claimed by Manu on 41 points meaning that the Match Manu prize was a slam dunk for Bob.

So with Allez les bleus! being screamed from the TV as Croatia succumbed to the French in the football we now move on to play in the land of Le Coq D`Or with round 6 on the Alsace golf links and with the recent heatwave and little prospect of rain forecast  those fairways and greens are going to be slick! Many thanks as always to Shirley, to the sponsors so numerous they have their own page on the website and of course to Nora and Daniel for all the setting up on the day, all the photos and the administration beforehand.

See you in Alsace!