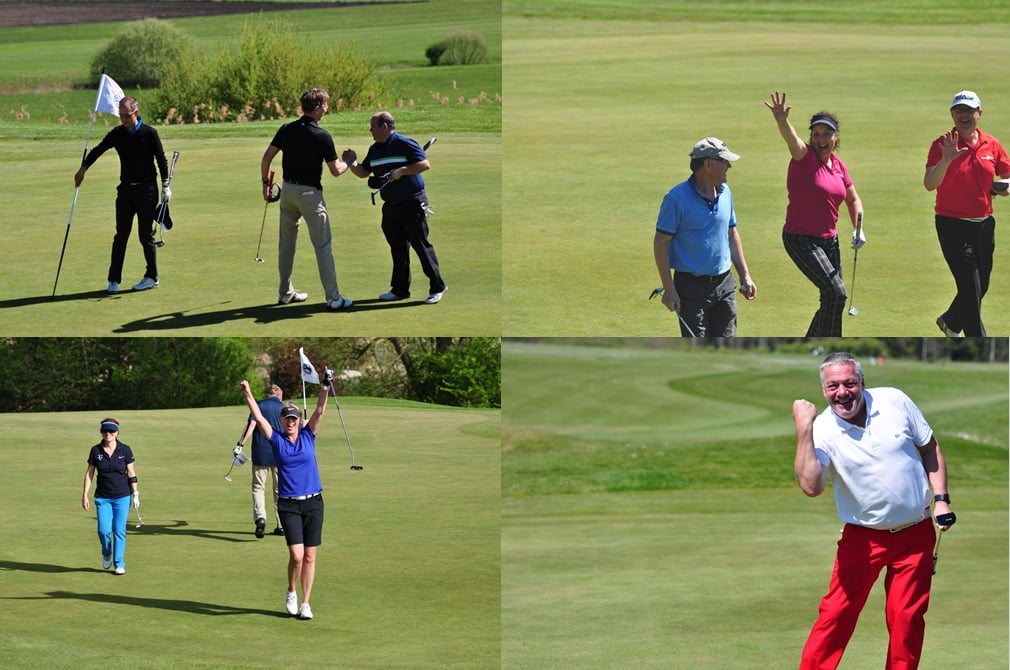 Season 2017 opened to blue skies, sunshine and all the hopes of great things to come. Before the day had seen that glorious golden orb slip below the horizon, this quotation was to resonate with a number of the 54 competitors that gathered on a Sunday morning in southern Germany. Ever since the balmy afternoon of the 24th of April in Zürich, when the snowman succumbed in 9 minutes 52 seconds, thus suggesting, according to folk law, a pleasant summer, it had rained , hailed and snowed and the mercury had been sent plummeting. So it was a welcome relief that the 30th bought us weather that allowed some to don the shorter trouser, and some of the ladies to wear skirts. (A shame that he of the longs was not present to give us a display).

It was a credit then to the green keeping staff that the course was presented in such fine condition, and being April the rough was not a total ball eater, but appropriately difficult to require the hitting of the odd provisional or two. Once again this year the Martins had come up on the Saturday to warm up on the short course six-hole course, a bargain at Euro 25 each to go round three times, and a great way to practice that short game. This is an area of my game that has become a bit of a bête noir and so I am planning to give it some more attention this season. The Par 3 golf 4 fun events at Bad Schinznach will definitely help and perhaps some assistance from Golf Point Urdorf’s resident pro Kevin might be in order. 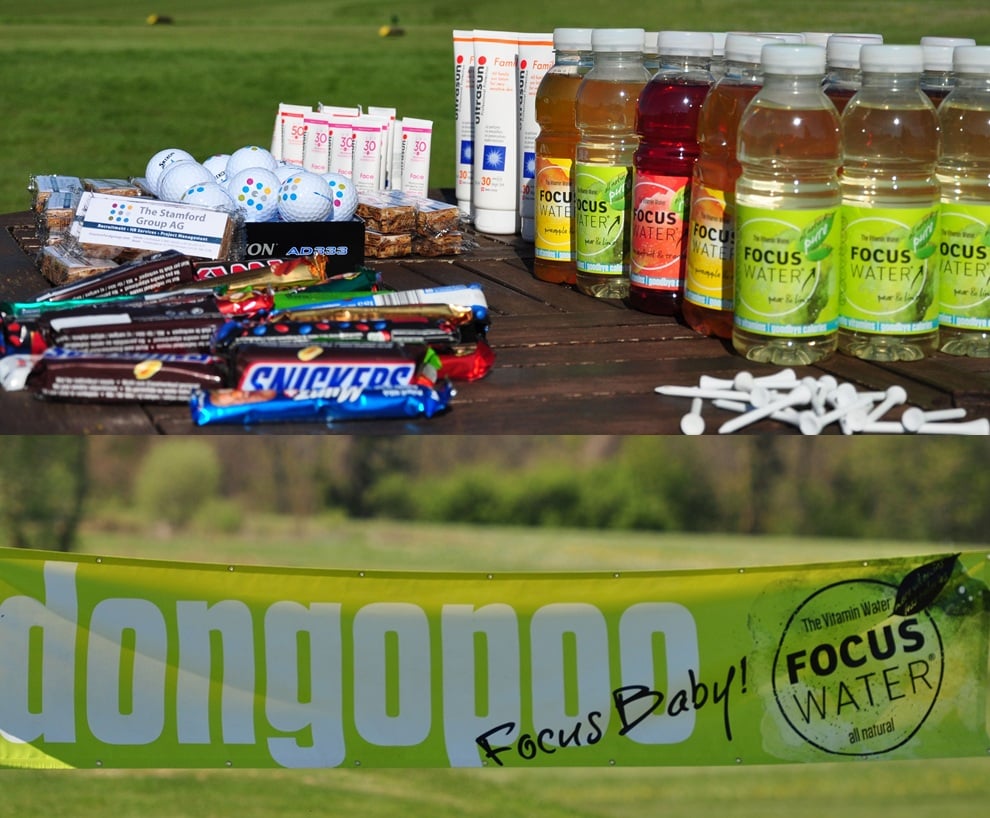 Second group out today at 10.08 am, and having availed myself of a number of the goodies on offer at the starters hut, generously supplied by some of our sponsors, Stamford, Focus Water and Ultrasun. (It was a factor 30 day – shame I didn’t actually use the product!!) Head honcho Nora, not playing today, in order to capture us all in beautiful focus, with Ron taking a sabbatical, was also demonstrating the benefits of camera lifting, and how easy it is to include everyday articles in to your fitness regime. It’s actually quite tricky though balancing a Nikon D90 with 1.5 kg zoom lens, a bottle of lager whilst lighting and smoking a filter tipped Parisienne simultaneously. Oh and taking photos, which have come out wonderfully.

Local rules explained and we were off. All three of us managed to put it down the middle, which was a promising start. We whipped round the front nine fairly quickly or at least in regulation time and it actually looked as though we could play golf, with some useful scoring. Onto the ninth and this golfers personal highlight of the day, as one managed to chip in from the back of the green for Par.  Mid round snack time, and the baguettes that the club had provided were delicious with fresh ingredients and fresh bread with a wide selection of drinks, fruit and chocolate, all served out by that dynamic duo of Dawn and Colette. Onto the back nine and first up of the special individual competition challenges the longest drive on the 10th —  oh the anticipation —Well not for me , a sweetly struck driver finding the left bunker!! My playing partners fared somewhat better, with one up the right whilst the other, who I should mention went on to win his handicap category and finish second overall , ripped one a veritable mile down the 18th fairway , to end with an adventurous 5 .  Nicole and Gurvinder would go on to win the ladies and gents competition respectively. 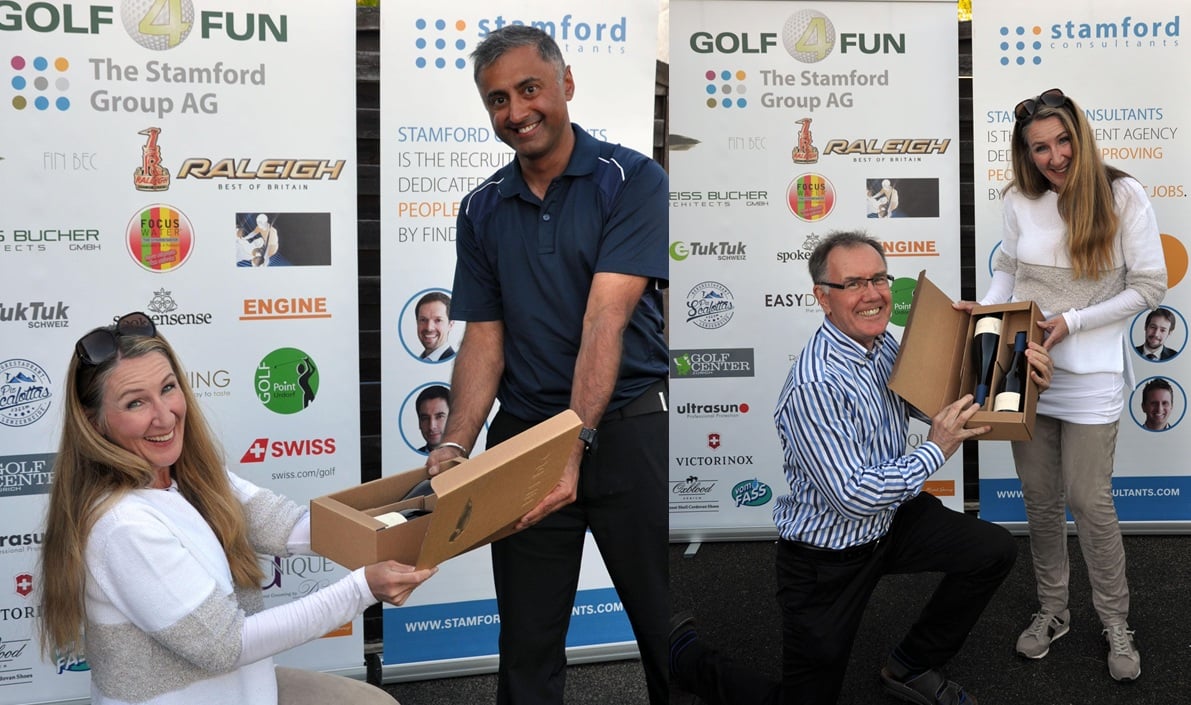 The 12th and the Hole in One category with the E bike up for grabs courtesy of Raleigh   — once again no takers from the 54. Obviously everyone is waiting for this particular technology to advance further before making a claim. The 14th and Nearest to the Pin—this golfer over clubbed—another playing partner under clubbed – and sure enough the third was just right. No Goldilocks moment though as his 4 m 30 cm effort was to be trumped by our Daniel T. M. with a winning 3m 65 cm. Walking down into Hell valley as it has been christened, or to the 15th tee box it suddenly dawned on me that I was in possession of the original ball I had teed off with on the first. The situation however was about to be rudely adjusted, as I first hit a drive that was so bad it was good , and then promptly fired my second directly into the biotop, waving adieu to my Titleist Velocity  22.One upside of the recent cold snap was that down on this part of the course, one is usually subjected to a mass of hematophagous (bloodsucking) wildlife, but today they were notably absent. No doubt they will have their revenge when we play round 5 on July 30th. Our round completed, we were greeted on the side of the 18th by Nora, still snapping away, and Dawn who was there with an ice cold beer for us, very kindly donated by Mr Broughton –Cheers Mark —nice touch.

A respectable day on the links, and after checking our scorecards, and enjoying the cold ones, it was off to shower and change, in preparation for Apero and Prize giving. On the sun drenched terrace overlooking the 18th green and the Alps looking spectacular in the background, the club served up a tasty spread with some very palatable Pino Grigio, although as  dedicated driver,  just a half glass was consumed. As those of you that were there Nora announced some new sponsors this year. A popular one seemed to be our new Swiss Gin sponsor Engine.  Another warmly received addition was Spoken Sense – a personal favourite — cranial therapy that could enhance that golf swing as well as many other benefits, and a chance to brush up on your English for those non-native speakers amongst us — then eTukTuk  —something  novel and Fun . 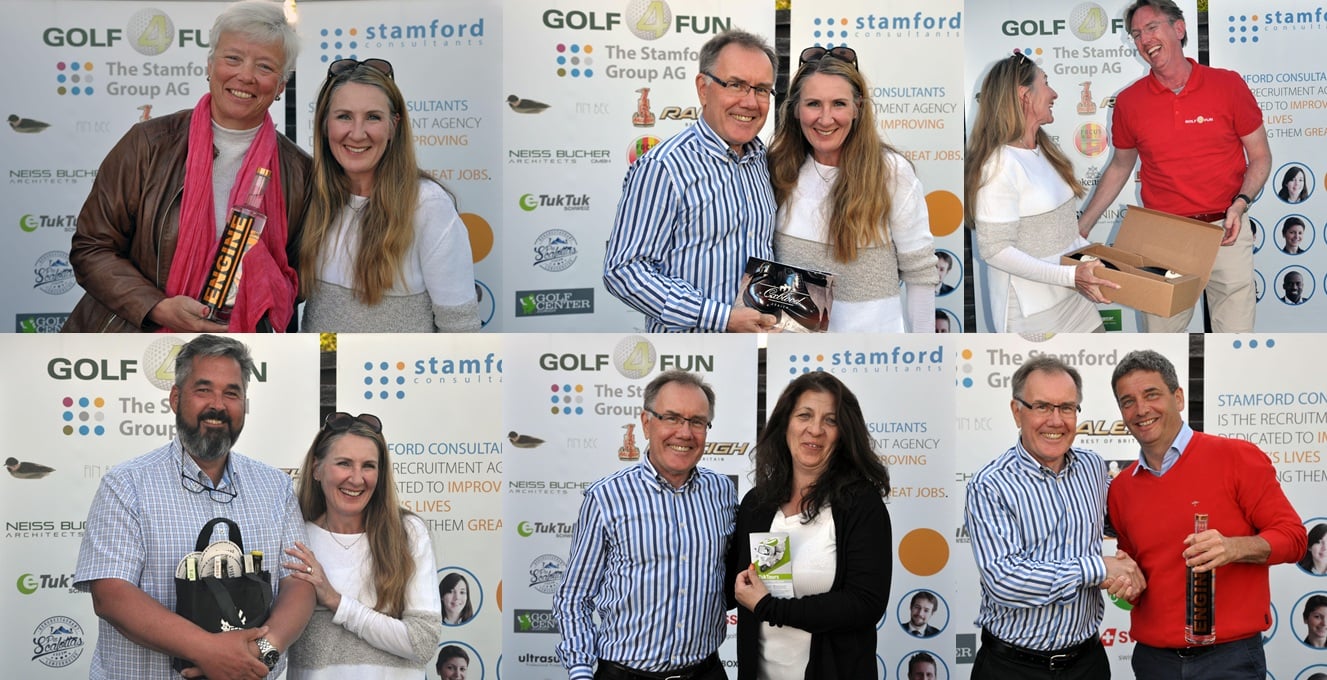 Some old favourites are still with us, and Match Manu, a hamper of goodies kindly donated from our golfing architect Manuel Neiss , this time for those matching 31 Stableford points, with the winner this time  being Thomas Ravelhofer . Then the Fin Bec Back 9 challenge, for those hitting 16 points on the back 9, Mark Robertston was the recipient of some excellent Prosecco. There are always a host of prizes given out at the tournaments for a variety of golfing deeds, no prizes today however for playing out of the most bunkers, although that is being looked at, which could be to the advantage of one of our tournament  participants.There were some fine scores out there today and a few handicaps were adjusted down. A special mention though to our winner Sergio, who is currently reducing his handicap quicker than the Eurostar, and was a deserved winner with 47 points.

Next up in the G4F calendar is Spring Break and the annual jaunt down to Bella Italia, hoping that the lemon harvest for 2016 was a bumper one and asking who will win the banana golf spectacular for 2017?   Then it’s Round two in Gams on June 11th. As always I would like to thank the club at Steisslingen for hosting us, and of course to Nora for the tons of organisation, as well as to helpers Dawn and Colette who help the day run so smoothly.As I began this blog with a quotation, and as we approach the weekends French Presidential run off, I will close with a quote from one time Governor of California George Deukmejan:

“The difference between golf and government is that in golf you cannot improve your lie. “