Living, as most of us Golf4Fun members do, in Switzerland, it is a rarity for us to get the chance to play on a links course. However, for round 6 of the 8 round Golf4Fun tournament series of 2018 just shy four dozen of us were granted that chance. Mind you we had to drive to France to achieve it; with Alsace golf links situated just 30 or so minutes’ drive north of Basel. With the recent prolonged bout of arid conditions, I was anticipating scorched fairways and super quick greens a la Carnoustie. 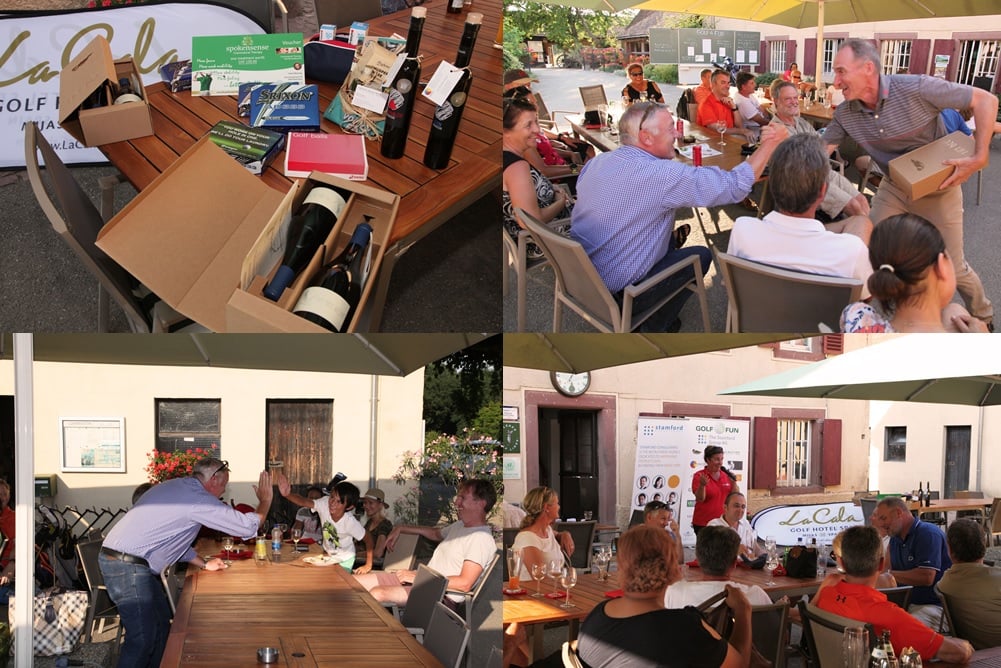 Heading up there on the Saturday to play a crafty practice round, it was quickly evident that the fairways, whilst having plenty of roll, remained quite verdant and the putting surfaces were actually not that fast. In fact I and my fellow playing partners could not hit the ball hard enough to get it to the hole on some greens. Golf4Fun’ers were certainly taking things seriously with what seemed like half Sundays field on the course today. Alsace golf links had a pretty good Saturday I feel. The evening was spent dining with friends at a close by hotel, under the stars overlooking the valley below. A very relaxing experience and one that allowed the temperature in our room to diminish to a comfortable level as one had forgotten to check if there was any air conditioning.

Following a good night’s rest and a very fine breakfast buffet, we drove down to the club to prepare for the days competition. The mercury was again high, and having had the luxury the day before of a buggy, today we were going to have to walk the course, and so there were plenty of liquids being taken on board. One of the sponsors Focus water was seeing good demand as was the Ultra sun factor 30 and 50, which were all available at the half way house where Colette, Nora and Shirley had stationed themselves to hand out pin position and local rules leaflets as well as sponsors goodies.  Today I was out at 10.30 am, playing in the company of Corinne, and he of the wedges Geoff. 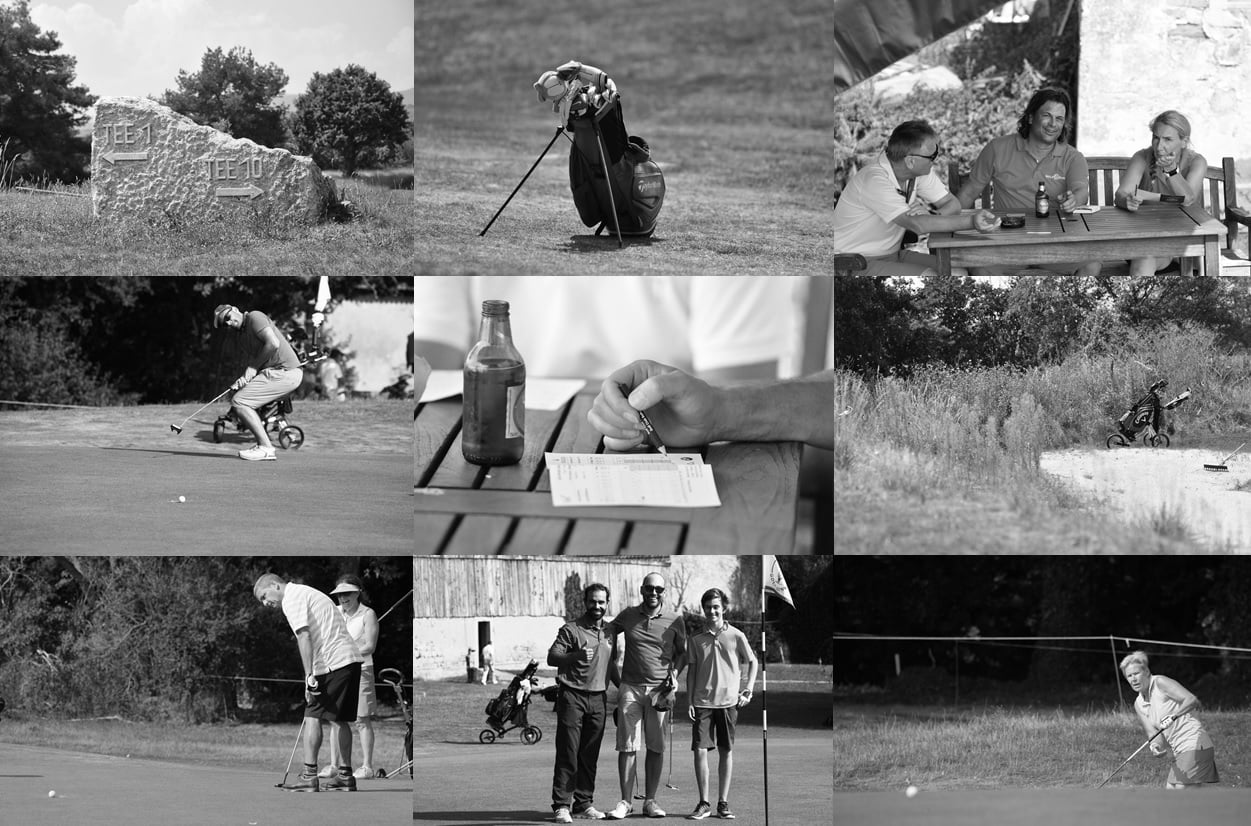 Playing conservatively off the first tee with a 5 iron, I managed to keep the ball in play and walk off the first with the same ball and 2 points. Someone, and I cannot remember who, had informed me earlier that the green keeping staff had been out earlier cutting the putting surfaces and so they were likely to be quicker than those of Saturdays practice round. This as it transpired was not the case, but by this time I had also imparted this knowledge to other competitors which caused some consternation over the opening holes. Everything was proceeding well until we arrived on the seventh. Taking out the big stick I managed to launch a controlled hook into the left fairway bunker, which as some of you may remember looks more like a well-tended sand quarry. 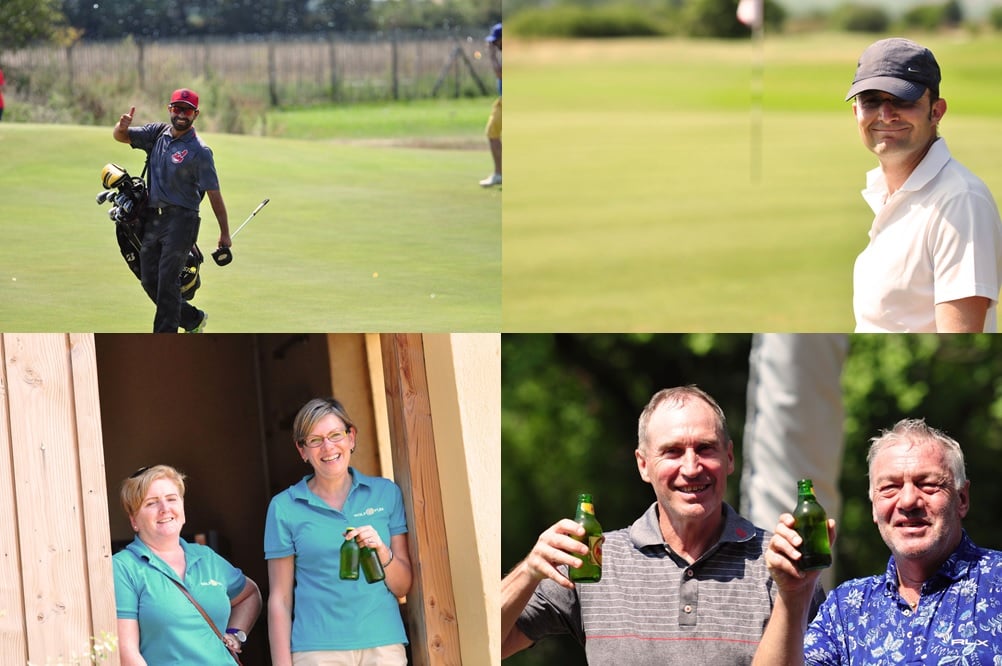 Anyway, having blasted the ball back onto the fairway , there seemed to of been a momentary lapse of concentration between me and Mr Wedges as when we got to the green we both realised that we had played each other’s ball . We agreed on a friendly half but of course both scratched the hole. Nine holes played and mid round snacks courtesy of the golf club – very tasty. Also time to reload on the drinks front. It’s a bit of a walk to the tenth, and at the hallway mark in a shaded area, some locals had decided to squat on the grass and conduct a spiritual séance. I was hoping they were offering up prayers to the golfing gods.

As it turned out their incantations were falling on deaf ears as none of us had a spectacular back nine. Thankfully our mid round helpers were buzzing around the course in a club car ensuring that everyone had enough refreshment as it was really beginning to get hot out there. In at last and a welcome cold beer awaited us just off the 18th, where our photographer Roy was recording the rounds completing their rounds. Cards handed in, and it was off for a wonderfully cooling shower in the rustic club house. 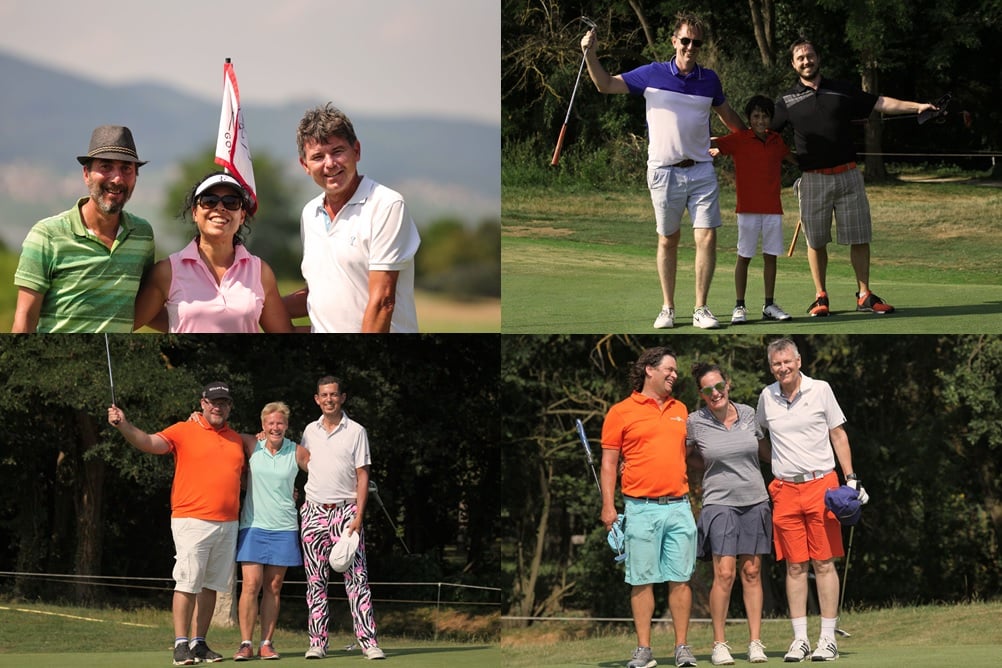 The increasing heat was obviously affecting the pace of play out on the course as it was a while before all the flights were in, but the club kitchen had done themselves proud with a gourmet spread including wine , that was gratefully received. Prize giving and there were some good scoring today, resulting in subsequent handicap reductions. Top of the list, Edith, posting 50 Netto and Stephanie close behind with 48 Netto. The men’s Brutto was won by Andreas I with Mark R and Kenny following close behind. Full results and rankings are available on the website. Individual hole competitions had  Daniel T. winning nearest the pin, nearest the line  Antoinette,  then furthest from the line (  or longest drive for you traditionalists ) for the men Strahil and the ladies Francesca, the hole in one and that week at La Cala moves on to Gams . Match Manu was a one horse race with Daniel T. matching the 36 points gained by Herr Neiss.

Big thanks go to Colette, Shirley and Nora for ensuring a great day. Daniel for the on day admin and to the staff at the Alsace golf links for making us all so welcome and providing us with a delicious Apero. Sorry to say Dawn and I will not be able to make Gams this year as we are off back to blighty to attend a wedding and a few cheeky rounds of golf are planned also. But I hope all those attending round 7 have a great day and we look forward to seeing you at the season finale at Waldkirch on 23rd of September.