A real favourite of mine Gruyere, with spectacular scenery, mountain air, and eight par 3s! Saturday morning and family Martin set out under blue skies for what turned out to be an incident free journey before arriving at our hotel in Rossens. Once checked in and unpacked, we made our way to the club, just a 10 minute drive away, to take part in a practice round with some other G4Funners. The practice round was particularly useful, as I struggled with my irons and the putter, and unlike Steisslingen I could not blame the length of the fairway grass or the pace of the greens, as the course was in excellent condition.

Saturday evening turned out warm and dry allowing us to eat under the stars with friends, something that had not seemed possible if the earlier forecasts were to be believed. Sunday morning, and its Zürich Love ride day! We were brutally reminded of this at 6.00am, as the regions motorbike enthusiasts had decided to choose the car park behind the hotel as their muster point, making their presence known with the revving of dozens of engines. An early start then! Following a simple breakfast, and checking out, it was off to the course for round two. 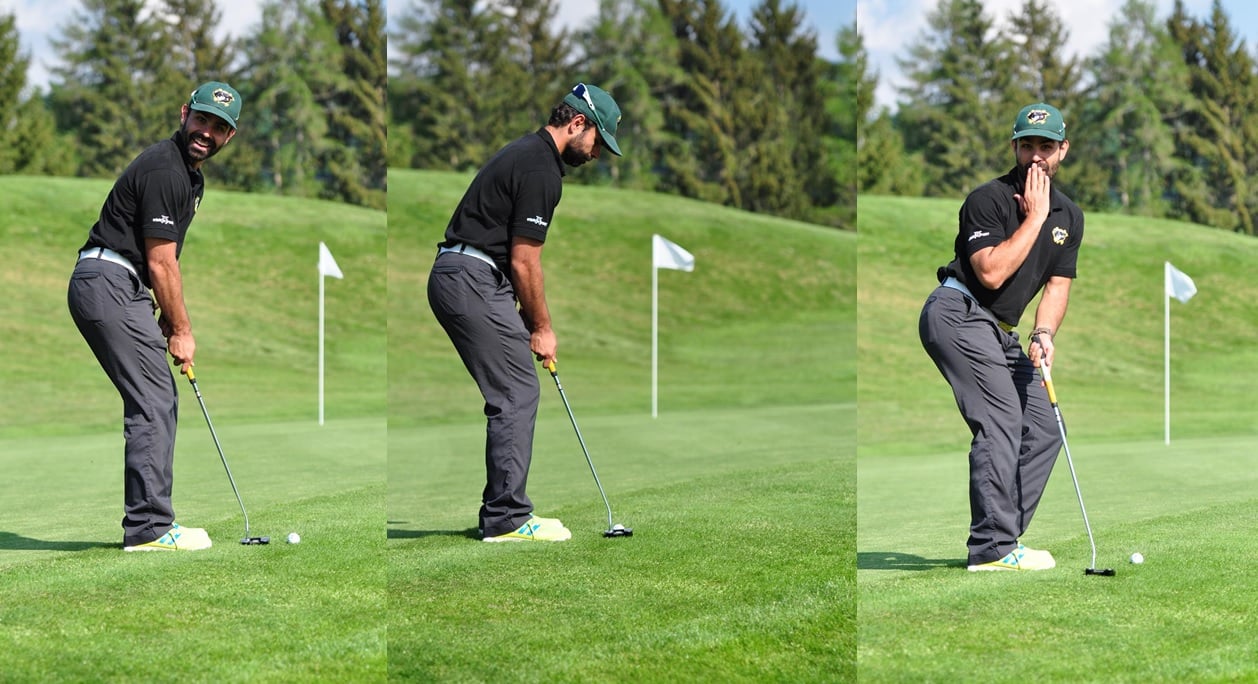 There were 40 competitors in the field and my flight was third out at 10.20 am. Nata and Tina were there on the first tee, where the sponsors Stamford, Focus Water and Ultra Sun supplied us with golf balls, refreshment and sun protection for the round, with Strahil giving us the local rules and answering any questions. The first at Gruyere is a downhill par 3, with views over the reservoir and the Alps forming a backdrop. It is also forms the setting for the Hole in one competition. Flight one and Alison today playing off a handicap of 1fires it in there to land just one scorecards distance from an ace! The pin was not to be so closely challenged again and so the weeks holiday courtesy of La Cala golf hotel and spa in Spain moves onto rounds 3 and 4 at Bad Bellingen – Heres hoping ! 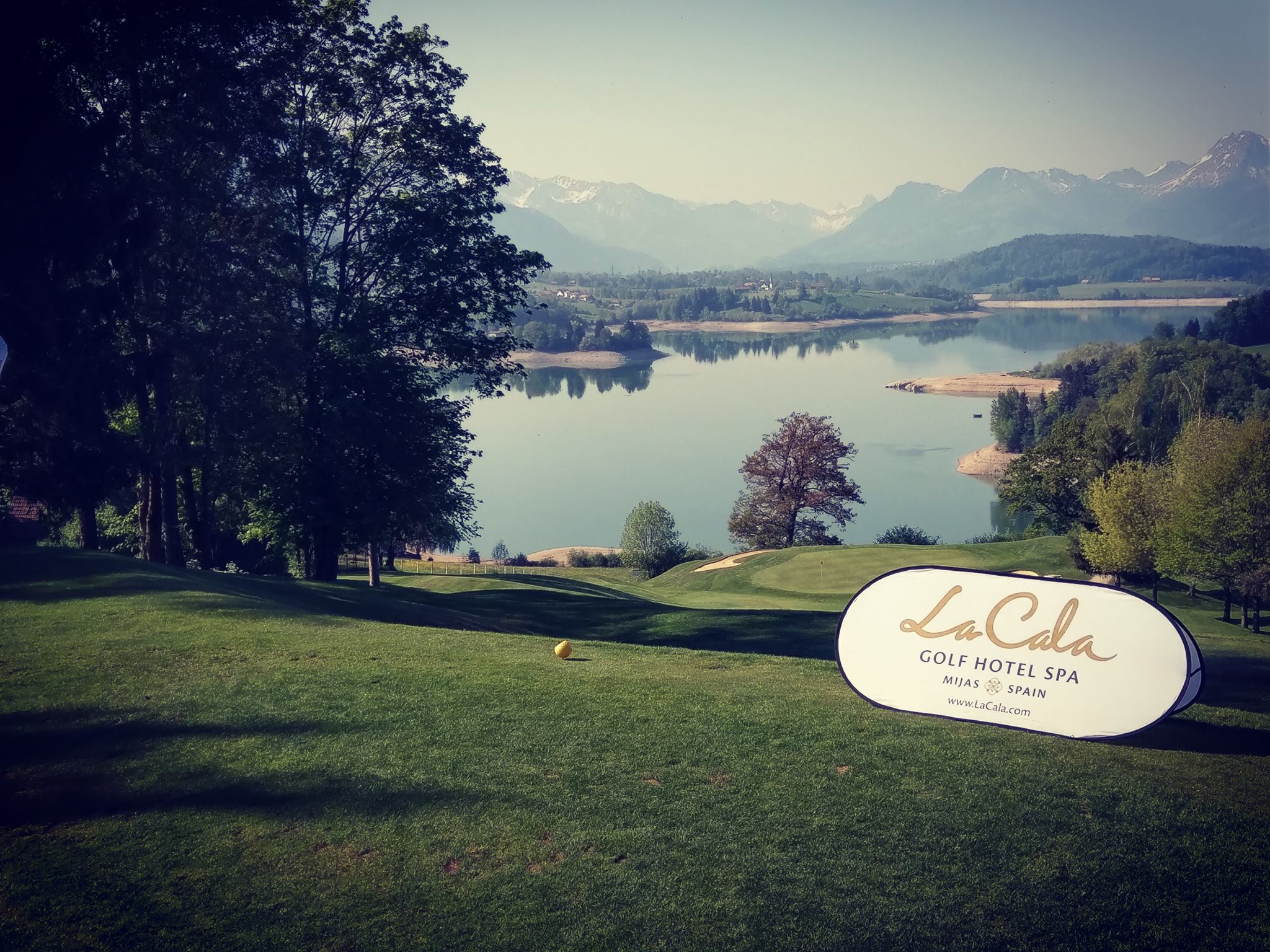 Today I was playing with Tim and Myriam. As many of you will know Mr H can at times be an enthusiastic golfer, and so I had decided to adorn a golf shirt that would match his exuberance ensuring that no one would miss our flight out on the course –Or so I thought. After a sandy par on the first, and some steady play from my flight partners we headed for the sixth tee box. Preparing to tee off with my Mizuno 5 wood in hand, something told me to just stand off it. As I did so a ball flew right over my right shoulder. There were gasps, and I was assured that had I not moved then I would now be on a flying ambulance with a Precept 3 imbedded in the back of my head. Please remember readers if in doubt shout FORE!

Pulse rate still elevated we moved on, with Tim hitting it long with the big stick, if not a little too long on the 7th, we were hoping for good things come the longest drive 15th. Down to the 8th, where Colette was stationed handing out mid round snacks and some delicious pies supplied by MMM Sausages. Appetites sated, it was time for nearest the pin. Flight three however decided to invent a new competition; named how far to the right can you hit a golf ball, with all of us playing off or close to the dropping zone. Timo though in flight 7 managed to end just 78cm from the pin to take this accolade.

Reaching the tenth and my electric trolley decided to malfunction, and I was faced with the prospect of pushing 30kg deadweight for the next 8 holes. Luckily after some jiggling I managed to work around the problem. A satisfactory outcome could not be said to be made though for the 4 iron of Tim’s on the 11th tee box, as the metal shaft snapped. Being only one year old I believe that the manufacturer is being contacted for some explanation and a possible replacement. The 12th and the Orator Gin sponsored Orator’s Aim (aka nearest the line) competition. Once again no takers in our flight with the eventual winner being Heidi just 1.3 meters away, with some fine efforts also from Mr Trousers Jay (1.9m) and first timer Lucia (4.0 m).

The 13th and Mr H blasted one over the corner of the dogleg leaving just a wedge into the green, sadly though no eagle, no birdie or par even. Some short game practice time required for all of us. The 15th, Longest drive, could he do it?   Alas no — with glory going to Mark R with runners up Jay and Bob both making a challenge. Finishing off on the 18th we were greeted by Nora, on camera, and Colette on beers–lovely cold ones—thanks to sponsor Brüll Beer. 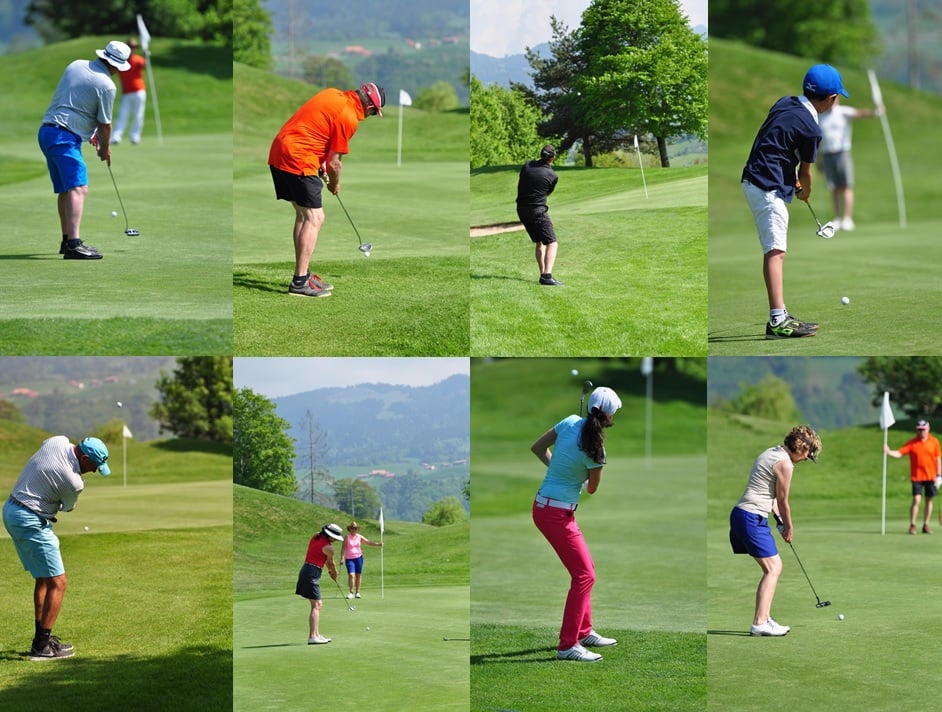 It took a whole for the rest of the field to come in, but thanks to Charlie from Fin Bec Fine Wines there was plenty of refreshment on hand and I hear he managed to secure quite a few orders from an appreciative audience. Looking forward to the Wallis Weekend in October when we get to visit the Fin Bec Cave facility for wine tasting and Raclette à la discretion. Cheers Charlie. Apero time, and with us assembled on the sun terrace, the kitchen turned out some truly delicious finger food, a real gourmet treat. Prize giving, with Brutto prizes for Alison, Maria and Nora making up the top three for the ladies, with Mark R, Jay and Kenny for the men. Netto for category 1  saw Maria , Kenny and Cal in the frame , category 2 was topped by Dario, Bob and Lucia, and in category 3 a fine performance from Freddy as well as Timo, Stephanie and Myriam.

It is sad that we may not be able to return again to Gruyere with Golf4Fun as the course is now set to close for 2 years with both the hotel and golf course set to go under major changes, and the resultant increase in both green fees and hotel charges may prove a little rich. We will see.  A big thank you to the club though, who made us feel very welcome.Also thanks to our helpers Nata, Tina and Colette, to our sponsors, and of course to Nora for making the whole event run so smoothly.

So its Au revoir Gruyere and Wilkommen Bad Bellingen .

Peter Martin, ever hopeful Tiger, May 2018 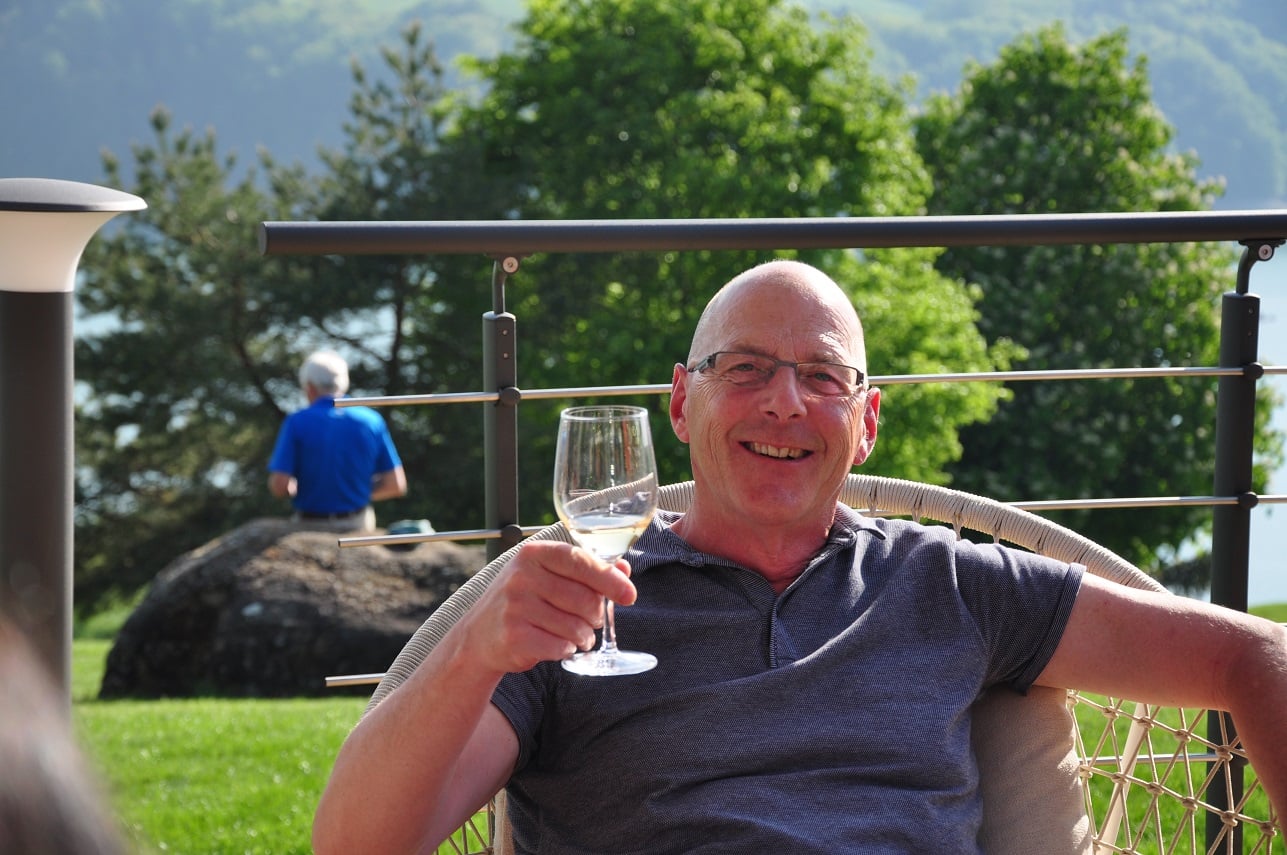