(AND NOT JUST THE HANDICAPS)

It had already been a busy week for me at work as global central banks prepare to open the spigot of liquidity and reduce borrowing costs once again; the great British Krona was also continuing to have a hard time of it weighed down by the political farce of Brexit and the crypto world was catching alight. Added to this, the sounds from Thursday’s annual firework bombardment for Swiss national day were still ringing in my ear, so I was fully ready for some R+R in the haven of Alsace. 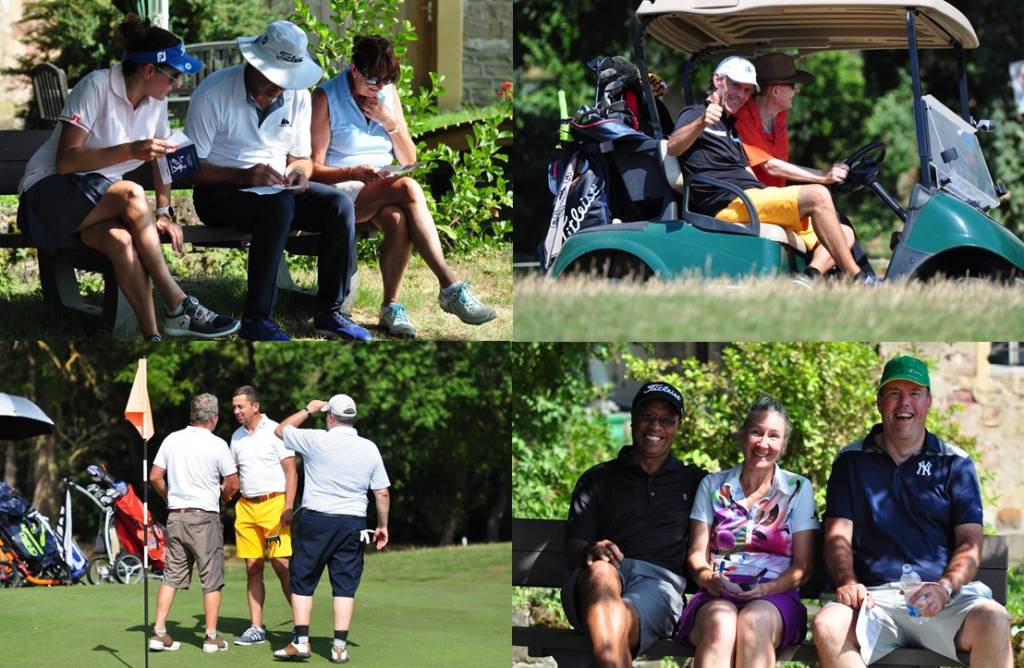 Team Martin and a number of other G4F members had decided to make a weekend of it. After a good drive up, and having deposited our luggage at our hotel in Rouffach, it was off to the course just a mere 8 minute hop away. Some of the others had started earlier and we met a couple of flights coming of the ninth. It was here that we learned that Peter S. had managed to get into an argument with a kitchen knife earlier in the week, resulting in his little finger becoming almost detached from his hand. His golf weekend was thus reduced to walking, eating, sleeping and drinking –shame. We wish him a speedy recovery.

Our 18 holes of practice was most enjoyable as well as educational on a course that has had some tweaks made to it since last year, and considering the recent period of extreme weather the fairways remained remarkably green, whilst the putting speed was dependent on the grain. The course in general was a credit to the grounds staff. Saturday night and this evening we were to dine in the hotel’s restaurant Bohrer. Apero at 7.00 pm was enjoyed sitting outside, and due in part to our rather rusty Franglais ended up with two half litres of white wine between three of us. Somehow, though, we managed.

Dinner and our table decided to plumb for the Menu Truffe, a seven course gastronomic journey influenced by the noble fruiting fungus all washed down by a fine Pauillac red. The restaurant and the adjoining Brasserie were both busy that evening, and so the staff were a little overwhelmed, and it was not until 11.30 pm, that our journey was completed. Great food though.

Sleep was not a problem, and Hypnos was soon with me — Come to think of it, I thought the bed seemed a little crowded.

Sunday, tournament day, and another azure sky greeted us. Breakfast was served in a traditional French country farm influenced room with a delightful terrace attached. The art work was a little disturbing for such a setting, Hounds savaging Fox etc. Packed and paid we were off to the club, where a good turnout of 45 hopefuls awaited, with a number of new faces boosting the numbers. Helpers today were Shirley, Bea, and Tina who had set up station under the shade of a tree to disperse some of our sponsor’s wares. Ultra-Sun, Focus Water, and that all important logo ball supplied by our main sponsor Stamford. Then it was for Bea to read us the local rules, before making our way to the first. 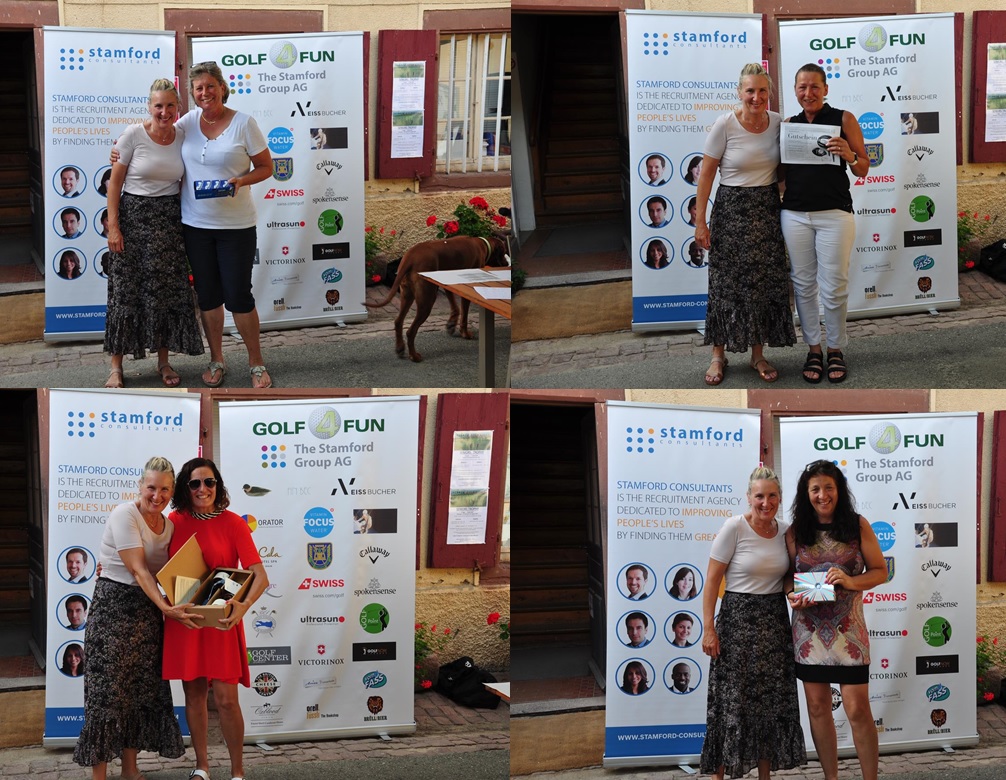 Standing on the first tee, we were to receive what we took as a good omen, with a visit from a member of the genus Vanessa or butterfly, which settled on each of us – a sign from the golfing gods perhaps? A steady enough start, but the courses defence of its large undulating greens came into play for me on the 3rd, after hitting two good irons to reach the front of the dance floor, I walked off with a 7!! A quick recovery on the par 3 4th saw some equilibrium established and then on the Par 5 5th a stroke of luck as my second out of the fairway bunker collided with the wooden footbridge that spans the cross fairway hazard and bounced onto the fairway beyond.

One of my playing companions managed to mislay their sand wedge on this hole. I hope someone found it. We were soon at the first of the competition holes, the 8th and nearest the pin sponsored by Orator distillers. This short par 3 has been re landscaped and now features a raised tee and a walled pond in front of the green to the left. There were to be no takers from my group, but with a remarkable 53 cm and a birdie for Mr Paul M he would have collected a bottle of Orator liquid gold. However his early departure meant that through a quirk in the rules the next on the list at 4 meters odd, Mr Philippe T. was the lucky recipient. Not an issue for this golfer who was at least 4 meters off the green. 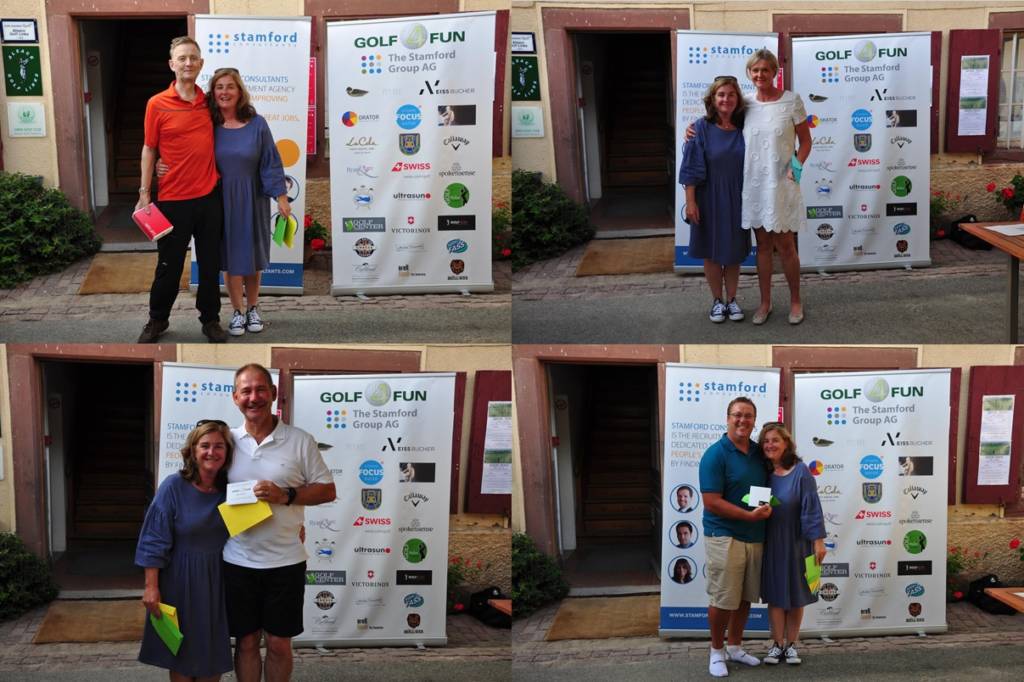 Mid round snacks and some respite from the heat and a chance to recharge those H2O levels. Shirley, Bea and Tina were there to dispense said refreshment and to offer a psychological boost – Thanks Ladies. Back 9, and on the 13th it was longest drive competition. I gave it a pretty good tonk but was unable to match the efforts of Mr trousers Jay and Tim H , whom, in what I believe is a first , had equal drives ,measured by laser at 246 yards (241 metres for those metric amongst you) and for this achievement they split a box of Fin Bec wine. The Ladies saw newcomer Alexandra taking the honours there.

The 16th and the Hole in One par 3 , a week at La Cala golf and Spa in Spain up for grabs. Alas again no takers and the prize moves on to the season final at Waldkirch. Although if its not claimed there then it will go into the raffle draw. So there could be two lucky recipients as another week is to be awarded to the winner of the seasons Tigers competition where currently things are tight at the top – All very exciting. The eighteenth Par 5 , and the scene I am informed of some creative play from Bob and Edith , although being in separate flights, they both found themselves in the water hazard to the right of the green, and both elected to play the ball where it had come to rest. Their antics were caught on camera thanks to the welcome return of Roy F. our photographer for the day. 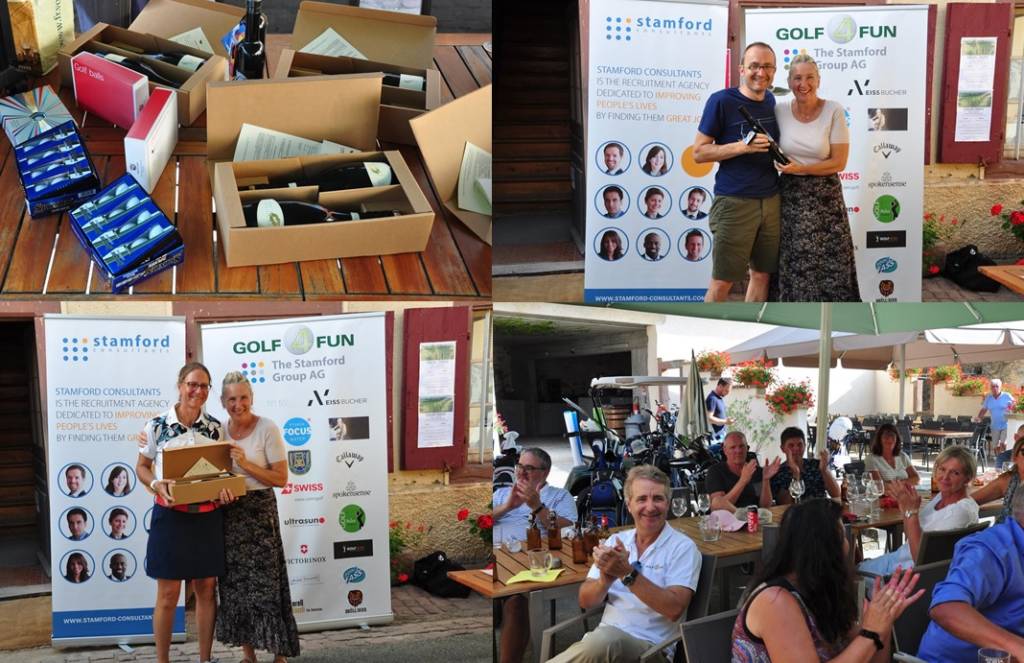 Bob and Edith both looked liked they had more luck than Van de Velde had in the 1999 British open at Carnoustie. Which is a good moment to mention that next August G4F is organising a trip to this revered course just outside Edinburgh, Scotland. All details are up on the travel section of the website www.golfun.ch. Back to Alsace and the club had laid on a truly glorious buffet, with meat,fish. Cheeses, salad bread,wine and water as well as some draught beer. Loved it !

A technical hitch with the computer to provide a ranking list and calculate the back 9 scores for the Fin Bec challenge meant a small delay to prize giving, but it gave us more time to demolish that buffet. Alex H also gave out details of the up and coming Ryder cup competition that will take place at Steisslingen in a couple of weeks. Sounds like a fun event and I believe there are still some places available. Ranking lists in , and there was some very respectful scoring, the results which you can find on the website. As I alluded to in the title there were a number of handicap reductions. 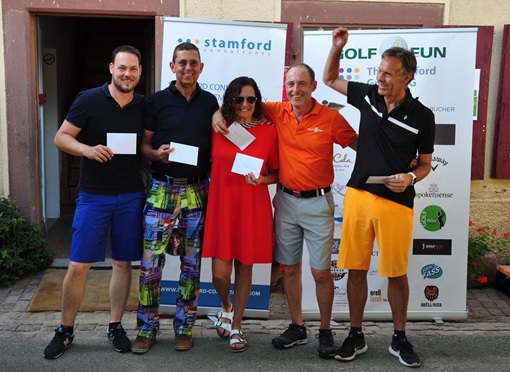 No less than 14 players reduced theirs – Cuts galore indeed !

Alsace had been a great success , and I love playing this course. It was a bonus to of played it with so many familiar faces as well as meeting some new ones. Now we move to the season final on the Saturday 28th September at Waldkirch ,which also features a sit down dinner after the days play,so generously subsidised by our main sponsor Stamford -Thanks Nicole. Its going to be a fun evening with some amazing prizes. Those weeks at La Cala, as well as two breaks at La Pinetina in bella Italia for the winners of the brutto and rabbits competition. There are also vouchers for air travel from SWISS and gin tasting courtesy of Orator. Those are just the highlights, as there are a cacophony of other goodies to give away.

Make sure you can make it !

Wishing all those travelling to Thracian cliffs in Bulgaria a great trip and good luck to Dick and Jay where they will shoot it out in the final of the individual championship. Lastly, many thanks again to all our sponsors, to Nora and Daniel, Shirley, Tina, Bea, Roy and to Alsace golf links for making us all feel most welcome.