A WEEKEND OF WORLD CUP FOOTBALL – AND SOME GOLF ALSO! 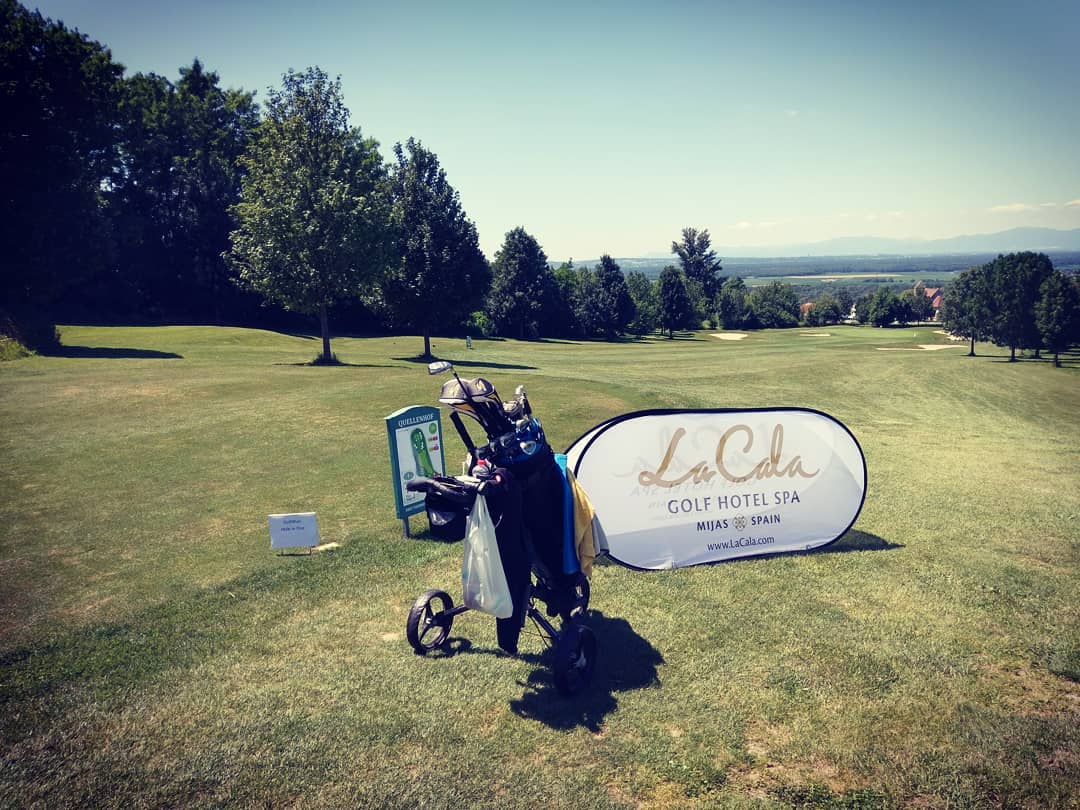 The international sporting calendar for June 2018 will be remembered for highlights such as the US open golf at Shinnecock hills, Rapha Nadal’s 11th singles championship victory on the terra cotta clay of Roland Garros, the opening group matches of FIFAs 21st world cup football extravaganza in Russia and rounds 3 and 4 of the Golf4Fun tournament series in the southern German spa town of Bad Bellingen. The latter though not seeing any air time on a single global sports network, adding a touch of exclusivity.

Late afternoon Friday and Dawn and I having battled through the weekend getaway traffic arrived at the hotel Hebelhof. After checking in we were delighted to find we were staying in a one bedroom apartment that was kitted out with all mod cons including a walk in tropical rain shower. 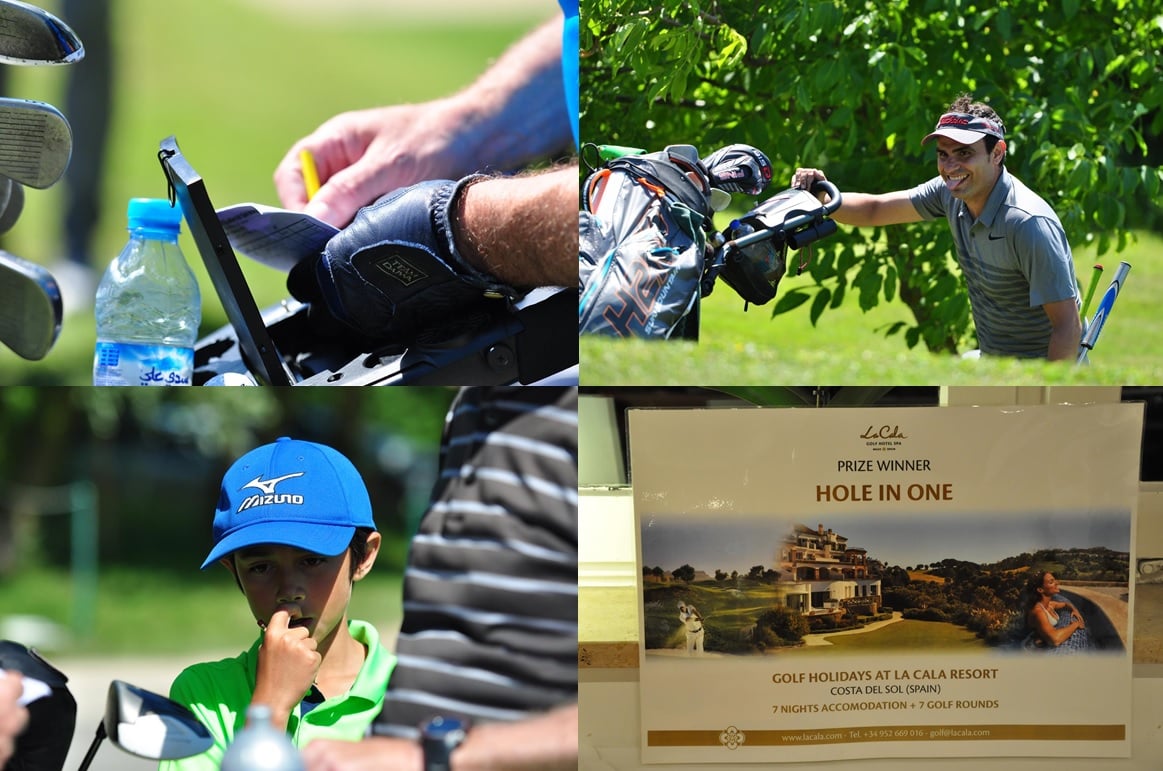 Having tested out the above, we changed and went down to the terrace of the hotel for drinks. There were some early arrivals already there and over the course of the next hour more competitors arrived to create quite a party atmosphere.

We slipped away with some friends to eat in a rustic restaurant just 3 minutes’ walk away to enjoy some local wine and culinary offerings, before returning to the hotel for a nightcap and a reasonably timed lights out.

Saturday morning and a slight cloud cover although the weather gods and various apps promised us sunshine to come. After a hearty breakfast it was just a 10 minute drive to the golf club, allowing time for a putt and some chipping practice.

Today we were to play the Quelenhof  course, and there almost 60 hopefuls teeing off this morning and adding to the international flavour of the field were   family Berghuis, comprising of dad Casper and his two twin sons Olivier and Daan, who had made the weekend by driving all the way from Holland. 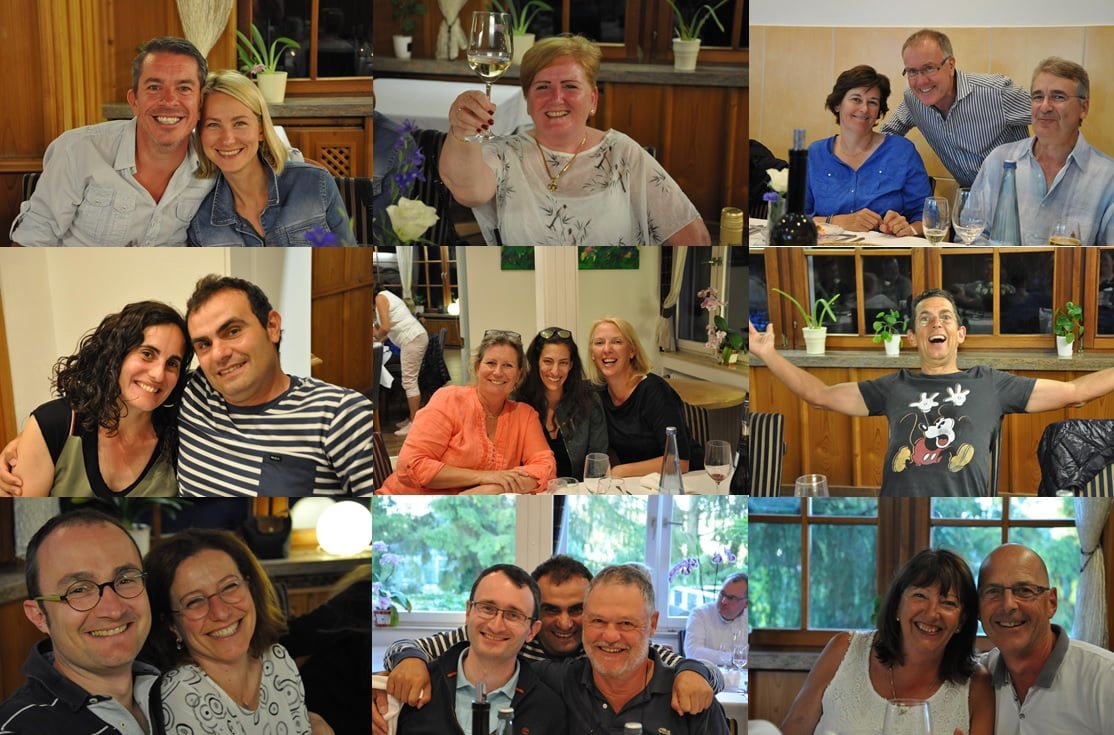 On the first tee starters hut Shirley and Colette were there to hand out the sponsors goodies with balls and tees from Stamford and skin protection from Ultra Sun.

Factor 30 applied and availed of the local rules thanks to Andreas, it was time for my flight to do battle. I was playing with Freddy and Pedro, both seasoned veterans of Golf4Fun and a pleasure to play with.  Somehow I felt this was going to be a good day as all three of us found the short stuff with our drives.

Having carded 8 points off the first three holes this was a happy golfer, until I took out the big stick on the fourth tee box and hit it left, resulting in a scratch.

First nine down, and despite some fine striking none of my flight were threatening on any of the competition holes. Orators Aim on the 5th would be won by Andreas G with nearest the pin on the 8th going to Ron at 2.96 metres. Although if there had been a competition for nearest the pin on the 10th green from the 8th tee then one of our group could well of been in contention!

Mid round snacks were provided by the club, with a selection of ham, cheese or salami rolls on offer as well as some fruit and rehydration.

Back nine, and not a great start, although I managed to rescue a point.

Longest drive 12th saw all three of us attempting to be Dustin Johnson and failing miserably, with Mark R (295 m!!!!)  And Nancy J (235m!!!) collecting the spoils here.

The Par 3  13th saw one of our flight playing below the wind and managing to hit the ladies tee box marker with the ball coming to rest in a position  that would damage his wallet. An amusing moment (for two of us anyway).

The golf was going well, so well in fact that I walked the 16th with both drives heading left and beyond redemption.

The hole in one 17th and a week in La Cala golf resort in Spain as a potential prize. Well I at least hit the green. Our tee off routine was briefly interrupted as a loads shout of FORE !! Emanated up from the 18th tee box. Good shout though and no harm done. 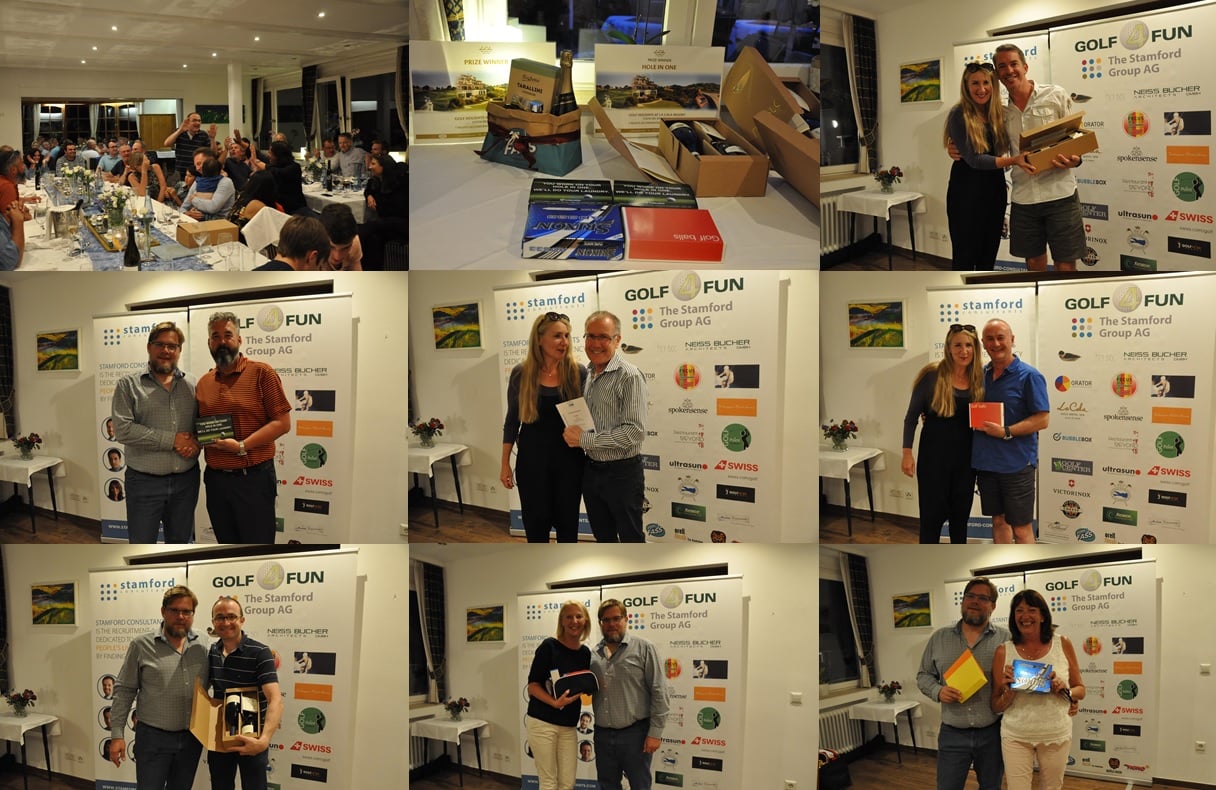 Playing the 18th and I managed to pull my second approach shot left of the green. Unsure of the balls eventual resting place and with out of bounds down the left side I opted to play a provisional. Up ahead, on the grassy knoll, to the right of the 18th green, stood Nora and some others, with Nora in full David Bailey mode. Hitting the ball sweetly I looked up to see it heading directly towards the group causing me to exercise those vocal cords and watch 4 grown adults and a rather expensive camera fall to the ground to avoid the incoming Titleist 7. Fortunately, for all concerned the ball dropped short. I managed to find my original second and finished with bogey.

Cards checked and signed and it was back to the club house for a cold one, thanks to our man on the 13th, before driving back to the hotel to change for dinner.

This evening the group were assembled in the hotels main dining room, with a pleasant repast provided by the hotel kitchen ,all washed down with a palatable red.

Prize giving and the Brutto ladies went to Alison and for the men it was Mr Trousers himself, Jay.  In the Netto categories there were wins for Phillip T, Ron and Nancy. Yours truly managed a second to get my handicap down to a personal best of 17.8. The resultant prize of a CHF 80 voucher from the Golf Centre has already been reinvested in a new golf shirt, and thanks to Adam and Thomas for the additional discount that is available to all golf 4 fun members.

Today’s Match Manu prize, generously supplied by Mr Neiss of our sponsors Neiss Bucher architects, was won by  Cal dG  and the Fin Bec   back 9  was collected  by  Phillip T.

Sunday morning, and a light rain shower, slightly worrisome, as I had not packed any rain gear and only had warm weather attire . By the time we had breakfasted and checked out though order had been restored in the heavens, and on arriving at the clubhouse the temperature had risen considerably.

Round 4 was being played on the Kapellenberg course and due to the numbers some flights were to start off the 11th and the others from the 01st.

My flight today had me playing with Bob and Stephanie due out at 11.20 on the 11th. I walked up the side of the 18th just before 11.00 am to see the first flights going out. After arriving I suddenly realised that I had dropped my score card somewhere down the 18th and so had to run back to retrieve it then run back to the 11th to ensure I was on time.

My vital signs were somewhat elevated as I hit my Srixon 4, which may have been a contributory factor to the nil point gained on the opening hole.

Hole 12 was longest drive, as well as mid round snacks again provided by the club and handed out by Collette, with Shirley helping out down at the first. 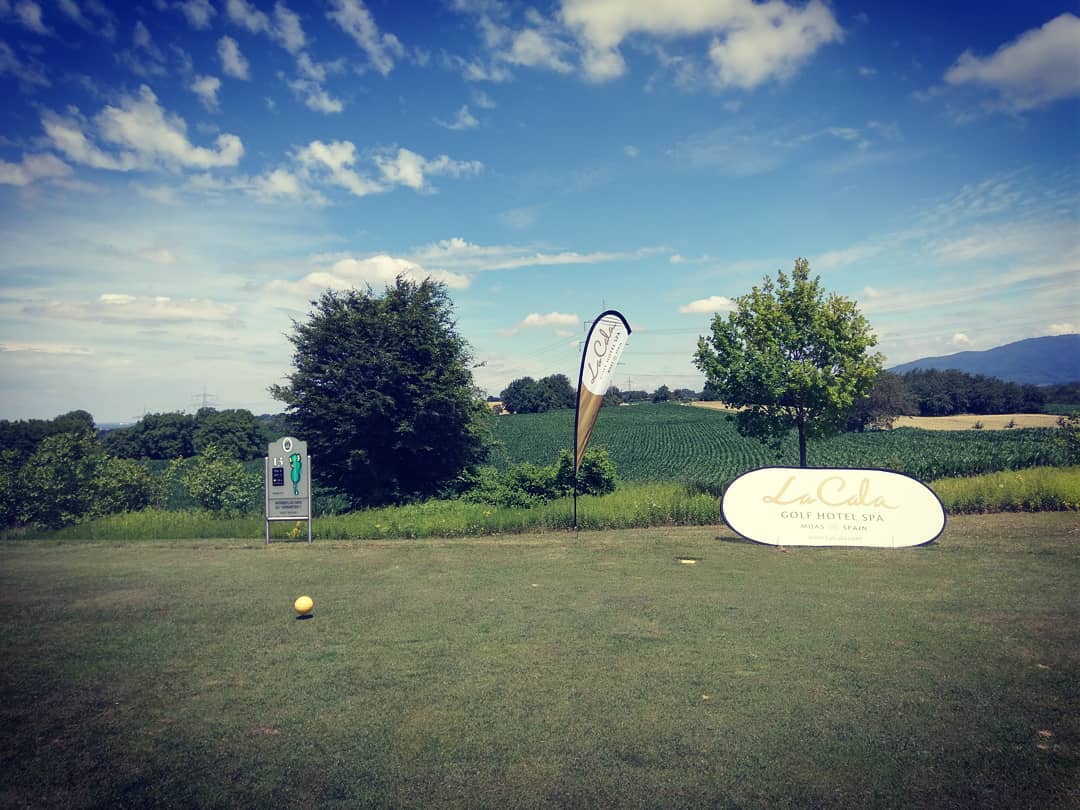 Having not properly warmed up our efforts here were woeful, and the eventual winners would be Ron (258m) and Irene with an impressive 224 meters (we won’t mention what happened to shot 2, 3 or 4 )

The 13th was hole in one, and at the end of the day the weeks break in La Cala,  although a reliable source informed me Alison came mightily close again. We will all get another chance come Steisslingen on July 15th.

Orators Aim on the 7th went to Stephanie, it was almost perfect, and marked a bit of a purple patch in my flight with Bob walking off the stroke index 1 par 4 6th with a birdie for 5 points!! Shame he did not pay into the birdie pot.

Nearest the pin on the 2nd was claimed by Mr Russel at 3.19 metres. 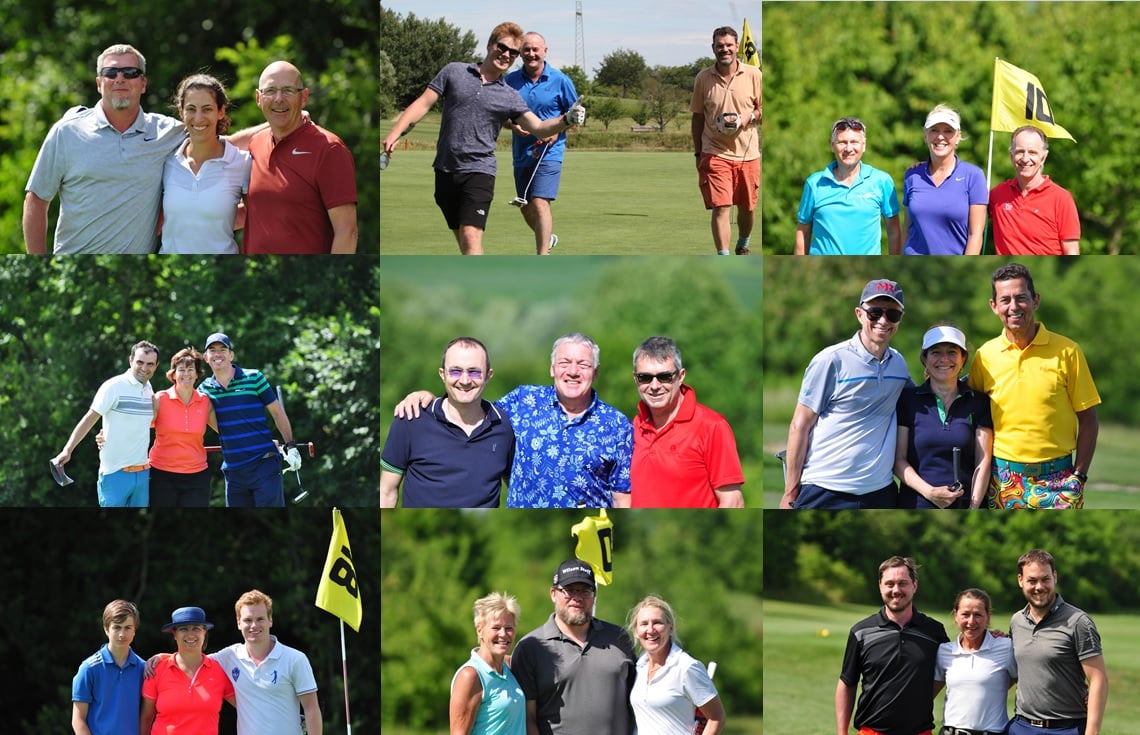 Having pared the 8th, I then proceeded to play the finishing two holes adding zilch to my points total and came of the 10th (our 18th) with a disappointing tally of 26 points for the round.

The news though that the English football team had beaten Panama 6-1 lifted my spirits somewhat. Having spent years watching England play football I was beginning to think that such a score line was against the law of the land.

We walked in (or rather I walked in as my playing partners were in a buggy) and arrived at the club house to find the BBQ all fired up and after a refreshing cold one tucked into a selection of cooked chicken, beef, fish and assorted accompaniments.

The field was all in and at just after 6.00 pm prize giving could begin. 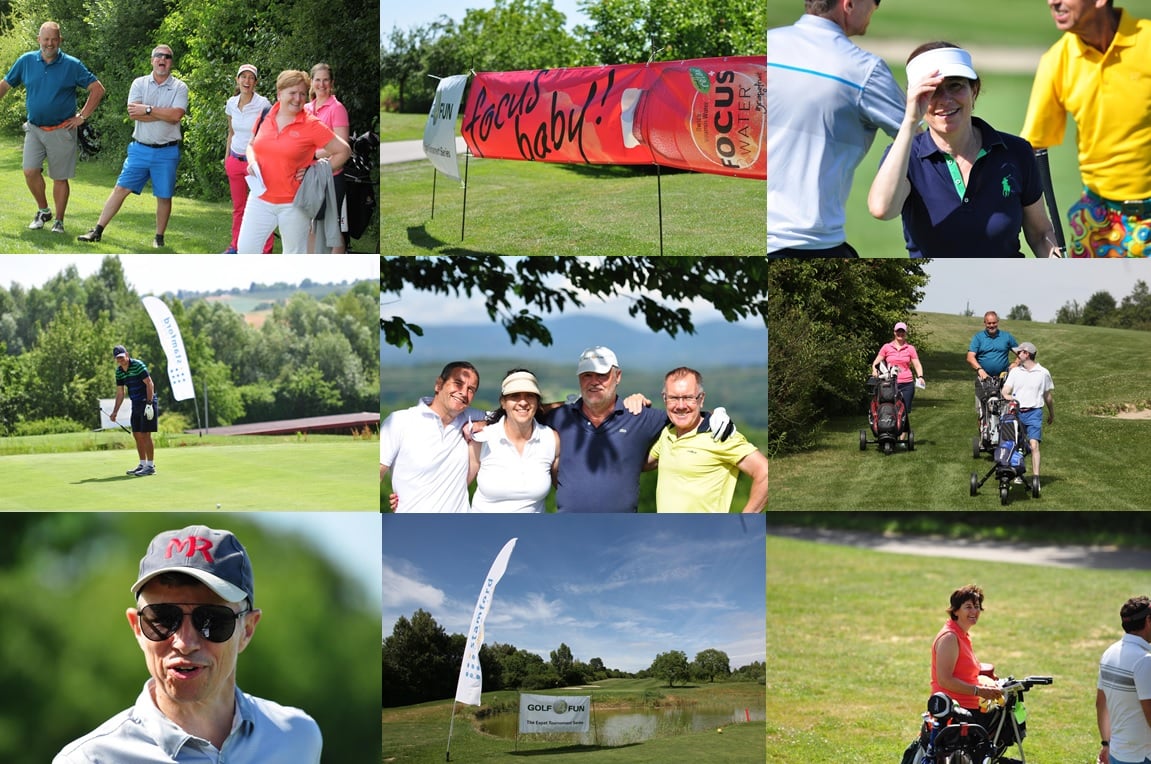 Brutto  for the Ladies fell again to Alison and to Alex H  for the men. Mrs H (Bea) picked up the Netto prize in category I and our Dutch friend Olivier topped category II whilst Marc B won  category III .

In the junior competition today young Euan R with 35 points beat Christian to the top spot.

All the day’s action was being captured in digital format thanks to Roy, and the results look good.

Match Manu saw Irene picking up a fine hamper of goodies adding to her longest drive .In fact between them our Spanish friends had quite a good day.

A mention must go to Rainer, who had a superb day carding an eagle and a birdie as he adjusted his handicap down having managed 38 points. 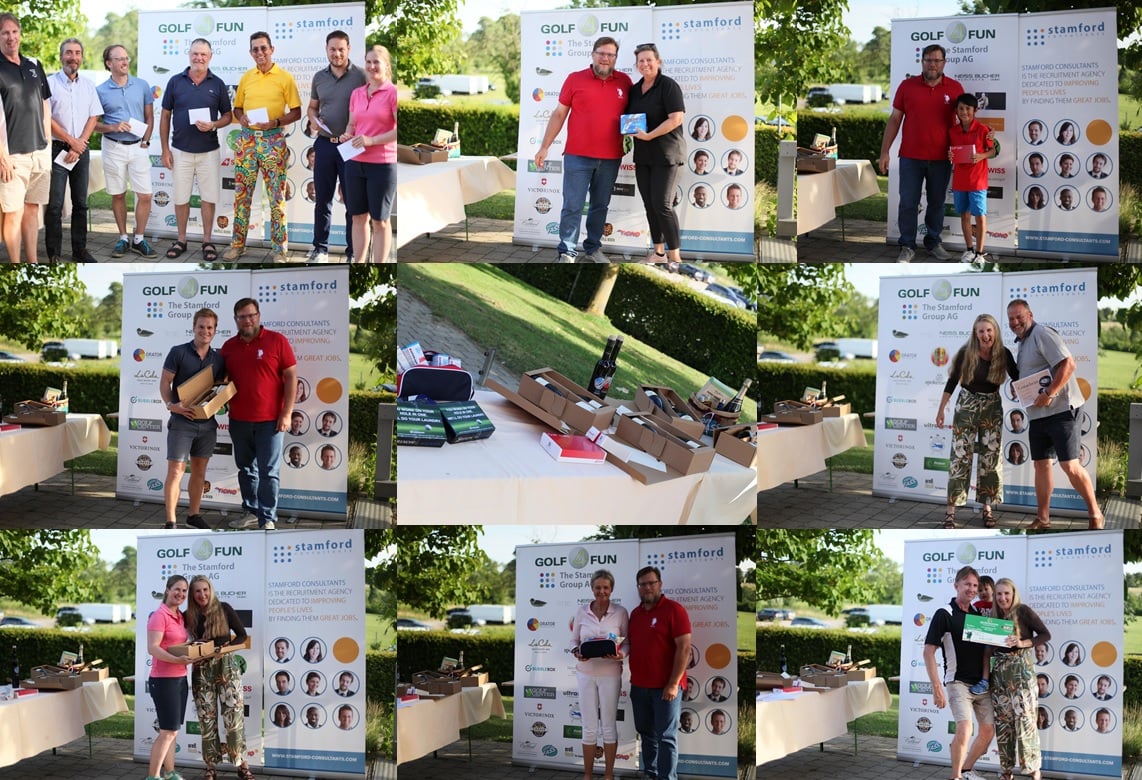 Prize giving done, and farewells made, the group made their way homeward.

A big thank you to the Hotel Hebelhof, and its staff, to Colette and Shirley as well as Irene for helping out with the various tasks on each day. To Daniel and of course to Nora for managing to make the weekend seamlessly successful.

I feel both fortunate and honoured to of been picked to represent Golf4Fun against the Basler Baggers in the Ryder cup to be played at Steisslingen on Saturday July 14th. I feel confident that Golf4Fun will bring home the bacon under the captaincy of Alex.

Round 5 is scheduled to be played the next day and I look forward to seeing many of you there. Suitably we will also discover who will be the new football world champions that very evening –Will it be a repeat of ’66?  Oh no….Germanys out.