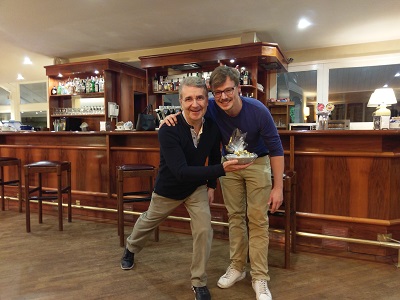 Spring break 2019 and the above mentioned Roman god of rain decided to join the party, with poor Apollo having to take a back seat for a change.

A larger group than normal this year was made possible with an increase in accommodation available at La Pinetina with the addition of a villa no less. All very Love Island, although I am not sure many of the stars of our show got to wear much in the way of beach wear.

After a good drive down through the San Bernardino, only blighted by a confrontation with a speed camera (at the time of writing, I am still living in fear of the postman) we arrived at our first venue, Monticello golf. 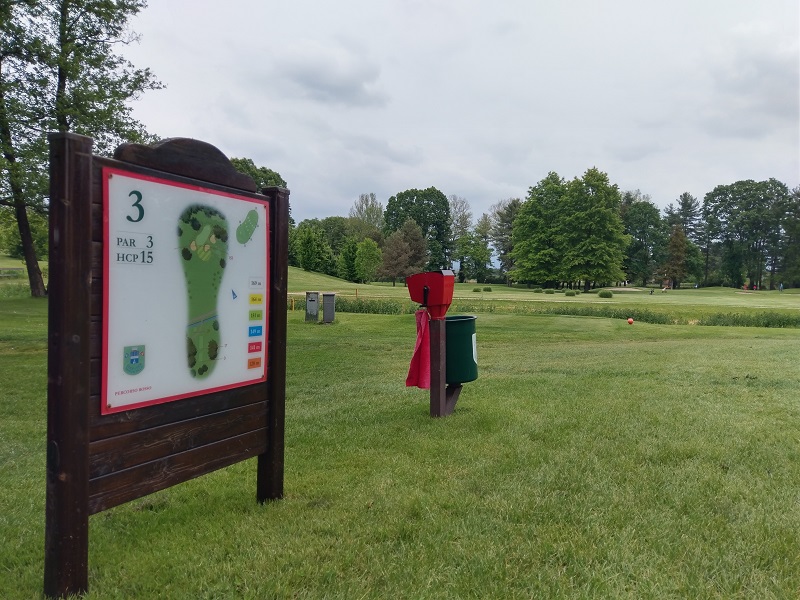 Eighteen holes on the red course, that at first inspection looked to be in perfect nick. We started dry and we started well, with the greens and fairways matching up to our initial expectations. The sand in the bunkers though was somewhat gloopy.

There was some good scoring in our group, and it was not until later in the round that the wet stuff showed up. Being first out though turned out to be somewhat fortuitous as the rains intensity increased steadily whilst we enjoyed a coffee and a club sandwich under cover.

Just a short hop in the car took us to our base camp for the next few days La Pinetina golf club, set in a forest of pines, a haven of peace.

The familiar faces of Jessica, Marco and Roberto were there to greet us like long lost siblings, great to be back!

Showered and changed it was down to the bar for that pre dinner snifter. The service at La Pinetina is quite like nowhere else I have stayed , and with a glass of chilled white Gavi in hand , Roberto arrives with  peanuts , crisps and a plate of salami  and parmigiana at no extra cost .

Dinner and tonight steak Fiorentina which had been pre booked and did not disappoint, nor did the accompanying beverage, a keenly priced Terra Brune.

Saturday morning, and our omnipresent deity really upped it a notch. An overcast and humid day, with a steady drizzle. 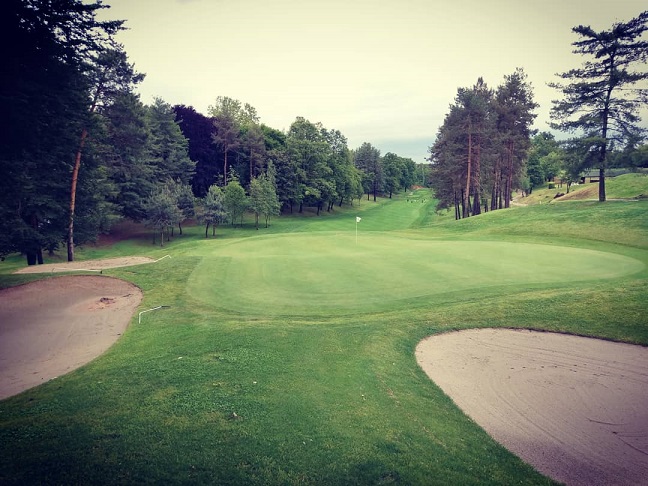 My opening tee shot saw my ball at least travel closer to the pin, albeit that the divot I gouged out of mother earth went further, and this is how it was to be for the next fourteen hellish holes.

Then, and only then, did I realise that I had been wearing an all-weather glove on my right hand. My God! To make matters worse I had even been taking it off and putting it back on when going to putt and I had not noticed. Unsurprisingly then I finished my round with the same number of points as the course has holes. After the success of Friday it was a disappointment.

Tonight’s culinary offering at the hotel was a little special , as the restaurant had planned to cater for a tournament that had been  cancelled at the last minute, and so the kitchen prepared a delicious thee course buffet with the ingredients they had already purchased. The sweet menu was a knockout. 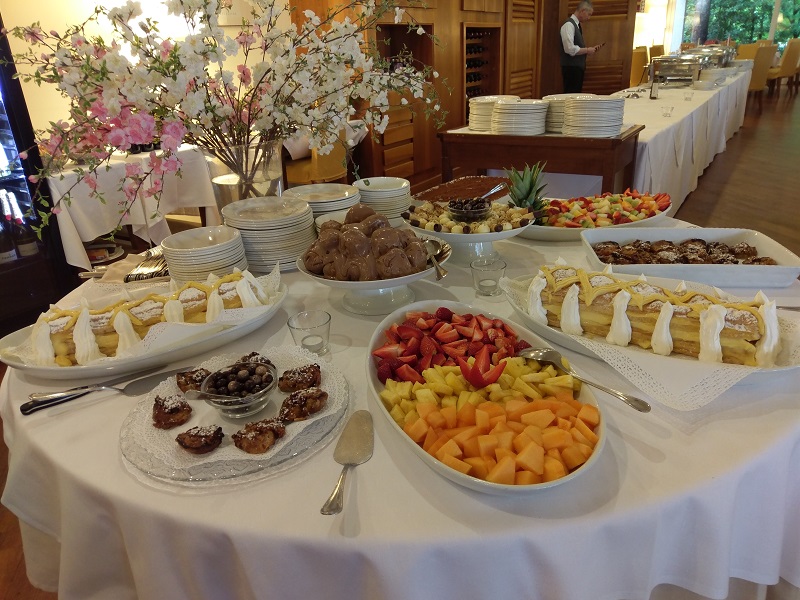 Talking of tournaments, our round for the day had been organised into a G4F competition with La Pinetina very kindly putting up some silverware as prizes, so congratulations to Christian for winning there. Needless to say there was no prize for wooden spoon.

Sunday’s pressure chart looked more promising initially, and today we had   a one hours drive west to the Bogogno golf club and the Del Conte course.

One of our G4F members unfortunately managed to collect a Euro 79.00 fine for not having a valid toll ticket.  In their defence though, the system is not ever so clear, with part of the autostrada adopting number plate recognition technology and another section using a regular toll. 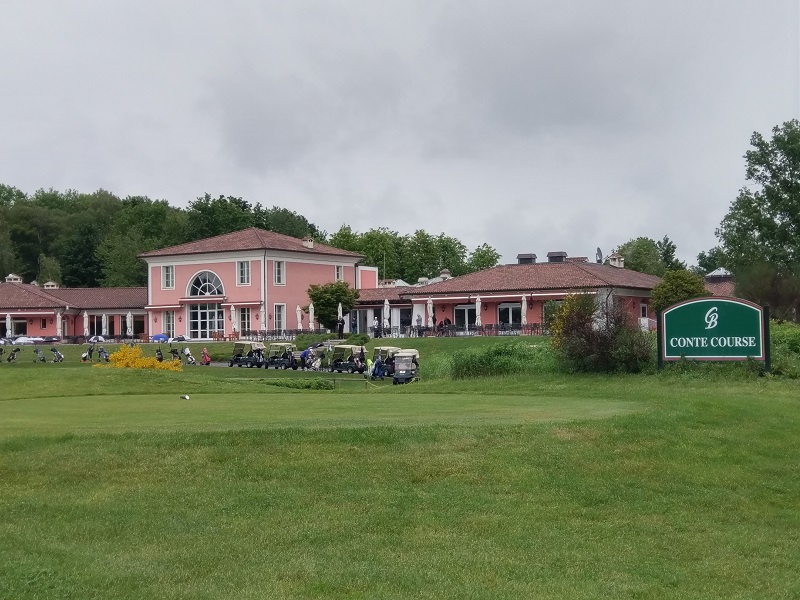 Conditions at the course were dry on arrival, and it was again humid, with various weather apps forecasting waterproofs and umbrellas would be required.

First tee, and today my club head actually made contact with my Srixon A360, whilst also wearing ones glove on the correct hand, and with a par on the first things were looking up.

That was until the third hole, where I spent most of it fishing my ball out of the creek that runs in front of the putting surface.

Umbrellas were soon being raised, and playing conditions became more difficult. On the 10th hole there was so much water around the pin it needed a ferry service to the hole.

In the end I finished with a fairly non-descript score although it had the right big figure. My bag was also lighter having misplaced my gap wedge somewhere.

Back to the hotel, and the inclement weather had obviously kept the Milanese at home, as the usual Sunday night traffic log jam never materialised, and so we made good time. 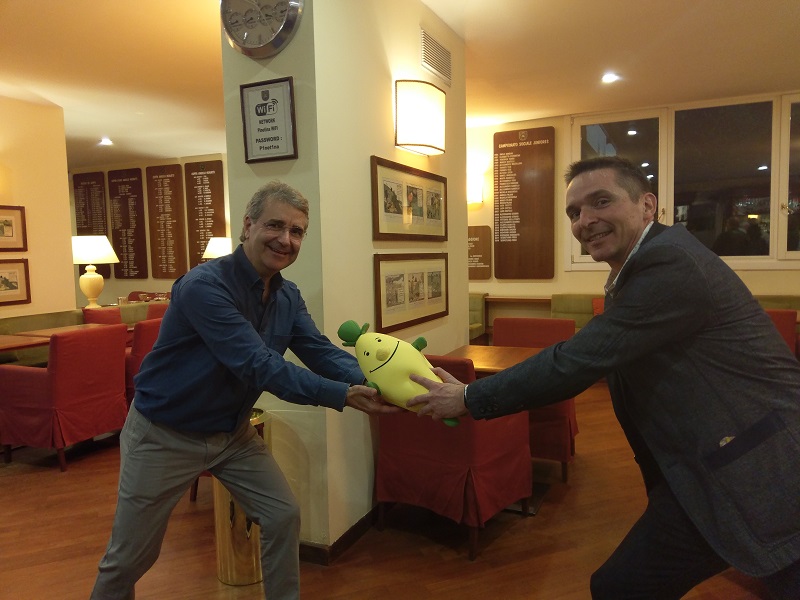 At dinner there was a small competition draw, called Secret Partners, where the stableford scores of two players, picked at random, are combined and the pairs with the highest and second highest win a cash prize after everyone having put in Euro 5. Tonight’s winning total was 70 with Colette and Peter F claiming the cash for first prize and Nicole and Cal receiving the runners up spot.

Post dinner and the last night meant it could only be time for the running of the  annual banana golf trophy. With the hotel empty of other guests G4F took over the bar and the fun started. It was probably the driest surface any of us had putted on in three days.

After a play off, the eventual winner was gentleman Don Pedro.

Monday, and Jupiter remained still very much in the ascendancy. Most of the group were off to play eighteen at Ville D`Est whilst yours truly and my other half drove back through the carwash to Zurich. 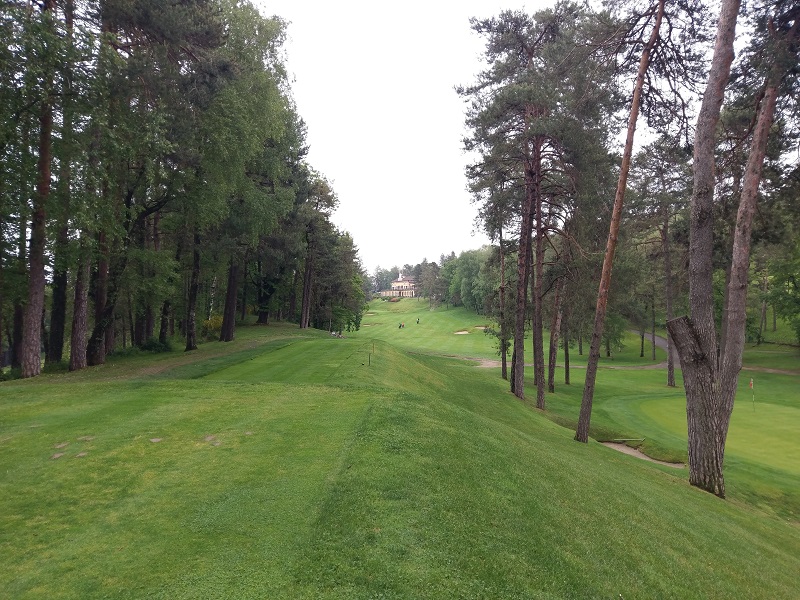 It had been another most enjoyable few days and despite the conditions, I think I can say that all the participants had a fun time and demand for next year’s trip certainly will be high. Hopefully then Apollo will be back with us.

Many thanks to our hosts La Pinetina and it goes without saying to Nora for all her organisation. Oh and to Dick for running the Secret Partners competition and not running off with the cash!