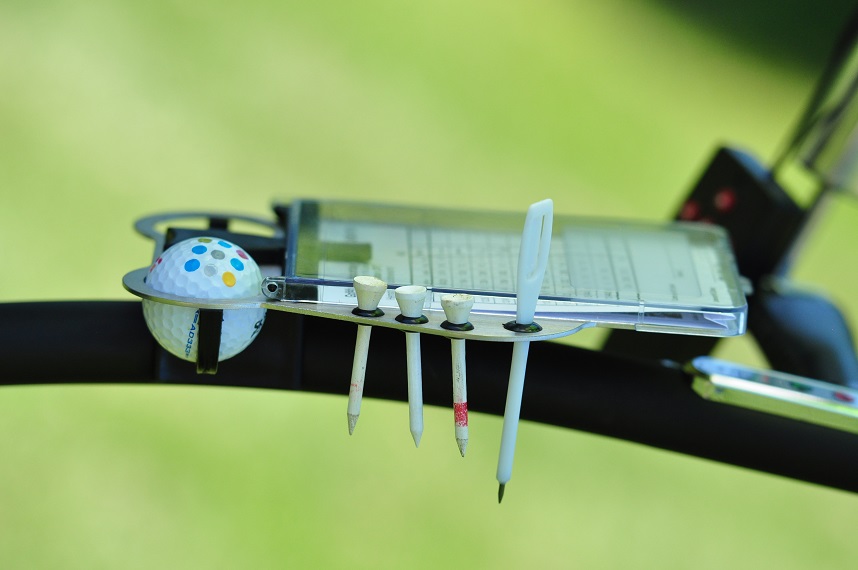 With the Saudi plume sweeping across mainland Europe causing certain members of the general public to strip off in supermarket frozen food sections to keep cool, the prospect of playing two rounds of golf whilst pushing a trolley (Golf not supermarket) was going to be a challenge. Luckily, two of G4F sponsors, Focus Water and Ultra sun would be at hand to provide some relief from the conditions, and of course that all important Stamford consultancy golf ball was sure to come in useful over the next two days.

First though the joy of dining Al Fresco on Friday night, with around 13 G4F members deciding to make two night weekend of it residing at the Hotel Hebelhof. A very pleasant evening was enjoyed out on the large terrace, with some good food accompanied by one or two bottles of the grape, I am not sure the third bottle was such a good idea though.

Saturday morning, blue sky, sun, and getting hotter, with the mercury scheduled to top 35 degrees C at its zenith. Round 3 and today we were to play the Quellenhof course, with the first flight out at 10.30 am leading a field of 33. Loaded up with liquids and factor 50 applied my flight set out and the start was a good one, with 6 points each garnered on the first brace of holes for two of us.

The wheel for me fell of the trolley on the fourth, hooking my tee shot into the bunda and subsequently running out of shots before I could finish the hole, although I did bounce back on the fifth. Nearest the pin 8th and the Orator distillers our sponsor here. Taking a gentle 8 iron I landed it on the dance floor although it was so far from the pin I am not sure if the tape was long enough to get a measurement. At the end of the day Myriam S. took the prize. Mid round snacks today followed the 9th being handed out by Shirley, who had found a shady spot near the starters hut on the first, offering some brief respite from the searing heat, as we enjoyed some more liquid intake and enjoying the sandwiches supplied by the club. 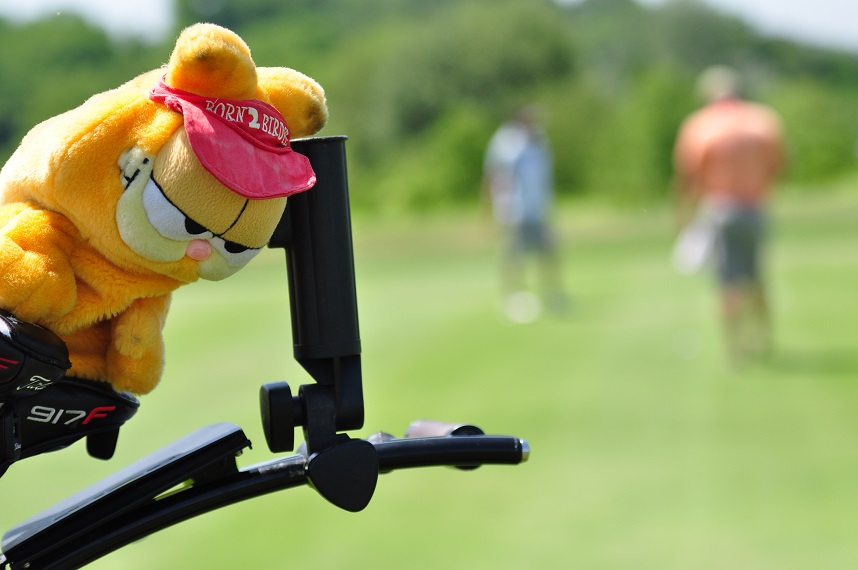 The next competition hole was the 12th and longest drive. I managed a pretty decent effort and thought I may have been in with a chance, only to be thwarted by a 260 meter smack from Mr Trousers, Jay. Myriam S., who, like the weather today, was on fire and adding to her nearest the pin, ladies longest drive with a 185 meter boomer. The heat was beginning to tell on this golfer and the last four holes were a bit of a disappointment. The 17th hole, where we were all attempting the golfers dream of an ace, and so win a week to La Cala golf hotel and spa, was played by this golfer as the – How close can you hit it to the ladies tee on the 18th competition — WINNER !!

An ugly performance on the 18th was quickly wiped from the mind as some shade and a cold beer greeted us just off the green. Scorecards verified and handed in; it was back to the hotel for a shower and a change ready for the evening’s dinner and prize giving.

Another culinary success from the Hebelhof kitchen, with a buffet style meal and plenty of options to satiate ones hunger.

Of the days victors, team Huger, Alex and Bea (who incidentally are soon to add a third member) took both brutto categories. Bea was just pipped by Patrick K for best Netto with a handicap adjusting 40 stableford points. Myriam S. was backing up the prize truck with a win in the best Netto in Category 2 and her other half Peter S. just missing out by a point. He of the wedges Geoff C. took the top spot in Category 3.

Sunday was forecast to be even more of a scorcher than Saturday, with round 4 scheduled to be played on the Kapellenberg course. The heart today was such that with the amount of salt seeping out through the pores in one’s skin, all you needed was a lime and a bottle of Tequila and there could have been a proper party. Sadly, there were to be no celebrations from this golfer with another indifferent round, but I am pleased to say my flight members had a better day.

Hole two and things were looking up as I managed to equal the nearest the pin winner Nicole with 1.47 meters. The difference being that she was from the pin whilst mine was to the front lip of the bunker. Nicole picked up a bottle of Orators Gin, I picked up 2 points. 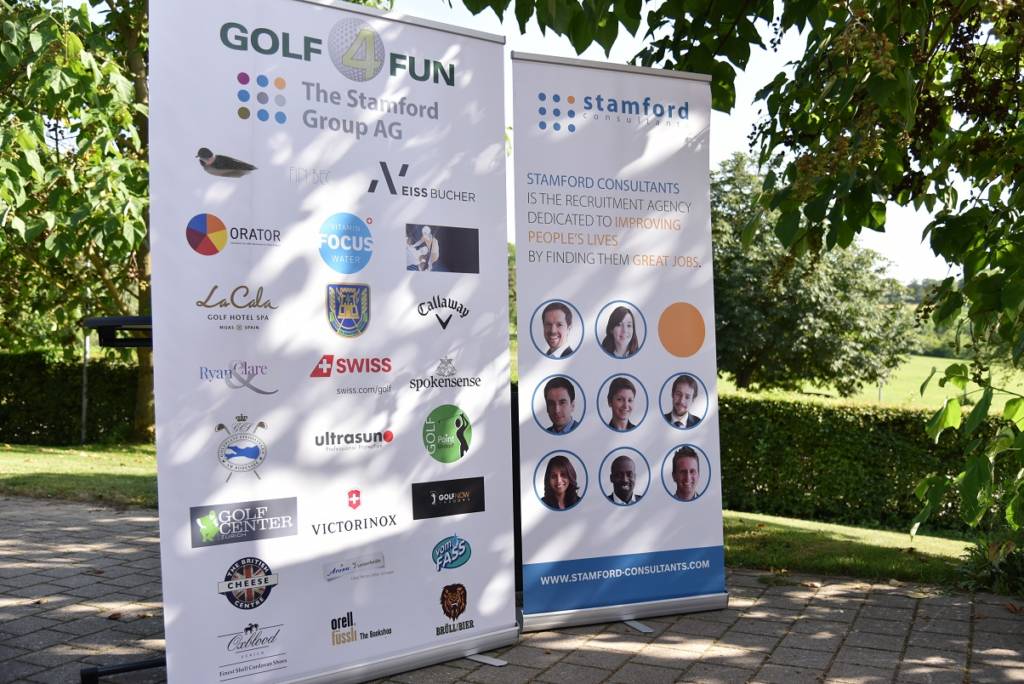 Longest drive on the 12th went again today to Mr Gilbert, but the heat was obviously telling as his effort today was 10 meters shorter at 250 meters. –Really! No such problems for Bea and bump with an impressive 215 meters. The hole in one 13th saw no takers this week and so that week in La Cala golf hotel and Spa in sunny Spain moves on to Steisslingen and round 5 come July 14th.

No prize unfortunately for worst golf trolley incident, as I decided to let go of mine on the top of the 13th, expecting it to gently roll down the slope, whereas I had miscalculated the gradient and my Click gear accelerated and veered to the left, overturning and crashing into the under growth. Top Gear wipe-out! Clubs, balls, tees and other jetsam retrieved, I rather limped home again, and despite consuming over 3.5 litres of water, the temperature was draining and there were some very tired looking golf shots towards the end.

Nora and Shirley were there just off the 18TH to greet us with some cold suds – Perfect!

Then back down to the clubhouse for a long overdue shower and change of clothes before we gathered for a BBQ buffet supplied by the club.

Over the two days there had been some lively debate as to the genus of a number of trees by the club house as they were producing some unusual buds. Thankfully in this age of technology we were able to discover that it was a Chinese blue bell tree — G4F it’s not all about the golf you know!! 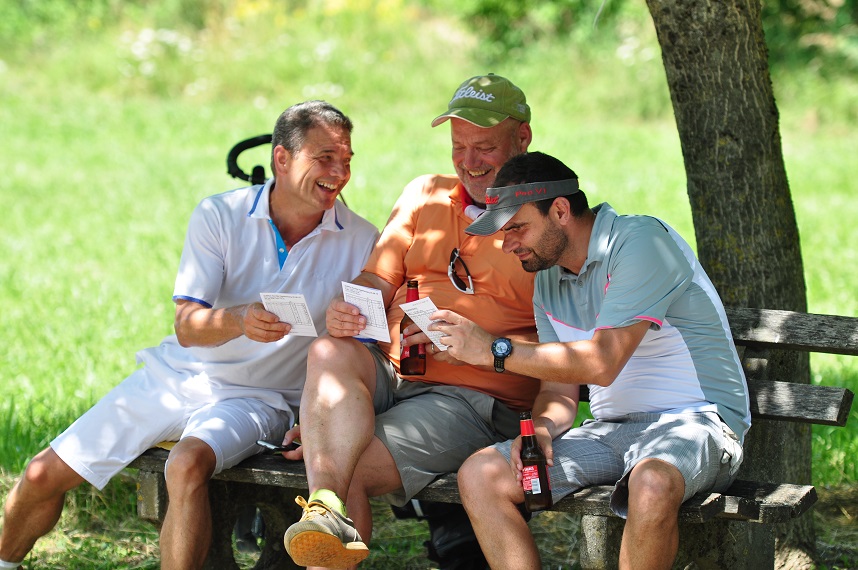 Curiosity satisfied, it was time for prizes, and there were again more additions to the Team Hugger wine cellar with top brutto scores. Dick  just nicked best Netto in Category one off Alex as well as reducing his handicap by 0.9. Category 2 was a closely fought affair with handicap adjustments for Georg and Daniel T M. while Antoinette took top spot in Category 3.

All the results and rankings are available on the G4F website www.golf4fun.ch.

Another fun and keenly competed weekend was over.

The Hotel again was as welcoming as ever, with all the staff being very helpful.

Thanks as always to Nora, Shirley, Daniel and Irene for all the organisational help not just before but on the day also helping the tournament run smoothly. Thanks also to Mark B for taking the photos at prize giving and to Nora capturing us all in embarrassing situations on the course. 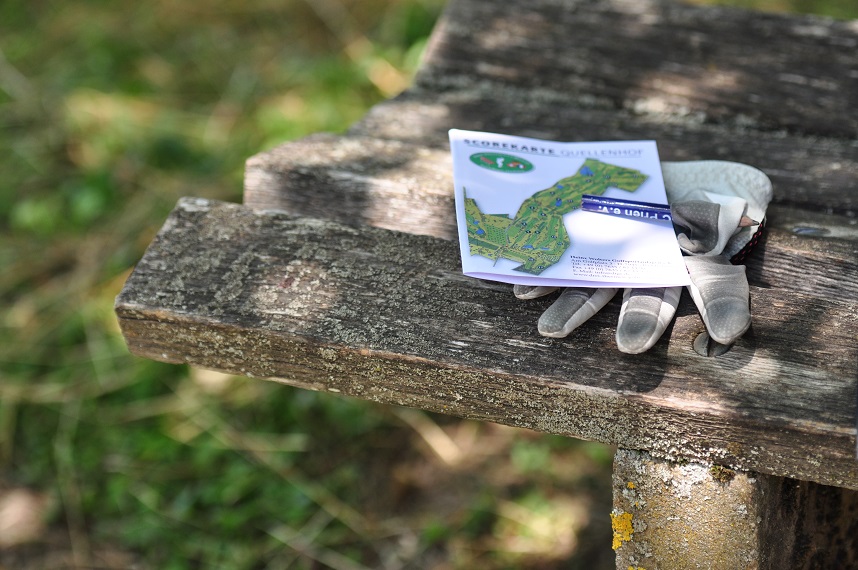