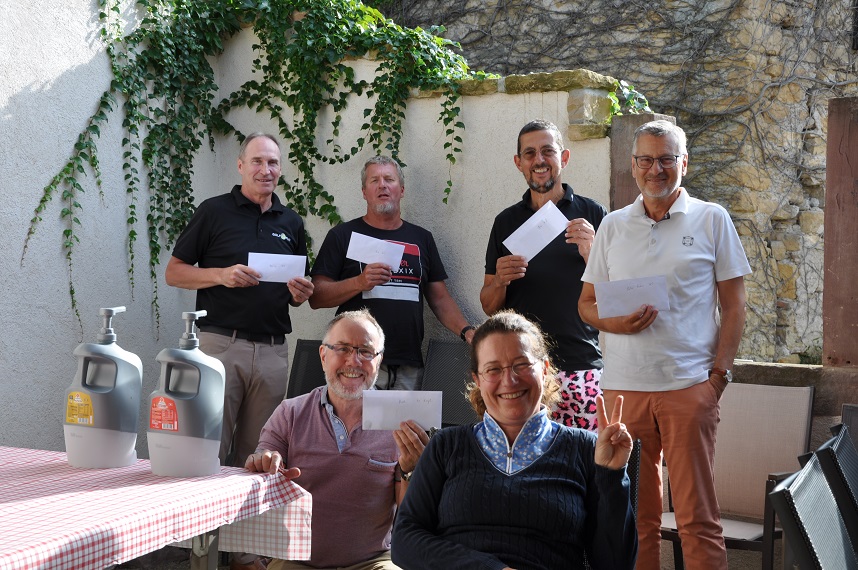 It has been 80 years almost to the day since the Battle of Britain was fought over the skies above the English channel, and it seems that long since Golf 4 Fun saw a hole in one occur at one of its tournaments. But I digress and will follow up on this later. This was to be the second tournament to be played in what has been a Covid shortened 2020 season and so wanting to make the most of it team Martin travelled up on the Saturday to the pretty town of Rouffach to deposit our luggage at our hotel before taking the  10 minute drive to the Alsace Golf Links. Weather conditions were perfect with a slight breeze and warm enough for shorts . Both Dawn and I had a most enjoyable round, and judging by our scores things were looking promising for maybe a couple of handicap cuts in the next days competition. 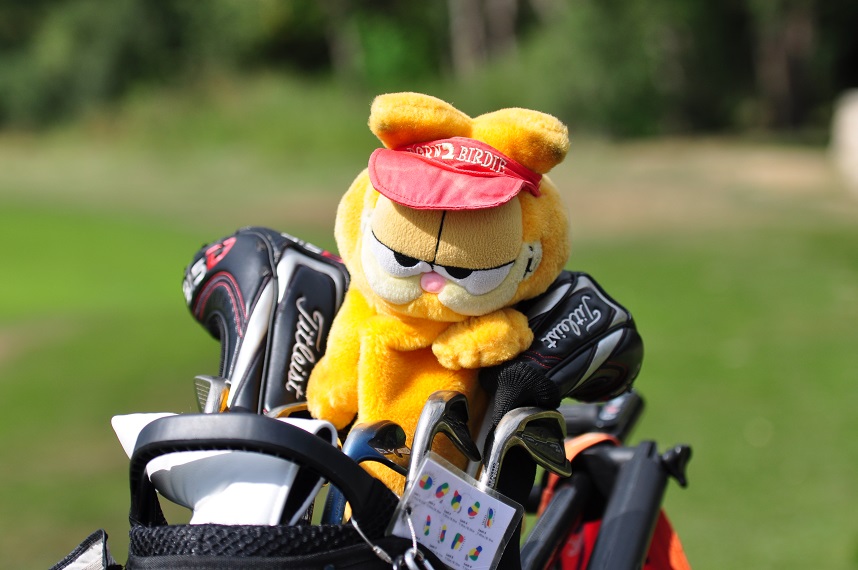 On arrival back at the clubhouse we bumped into a few other G4 Funners  whom had also travelled up a day earlier to get some practice in and it became apparent that with the dry conditions and fast fairways there were plenty of points out there come the morrow. Before that though Dawn and I had a rendezvous with a gourmet extravaganza at the  Restaurant Bohrer situated next to our hotel.  After a small Apero of local Gewurztraminer, we strolled across where we were shown to a table situated in a cosy courtyard. The staff were  pleasant and attentive and we chose a 5 course menu and accompanied it with a fine red from Pauillac Bordeaux and had a superb evening. I can highly recommend this restaurant should any of you be travelling in the area. We then had a quick nightcap at the hotel and it was off to bed. 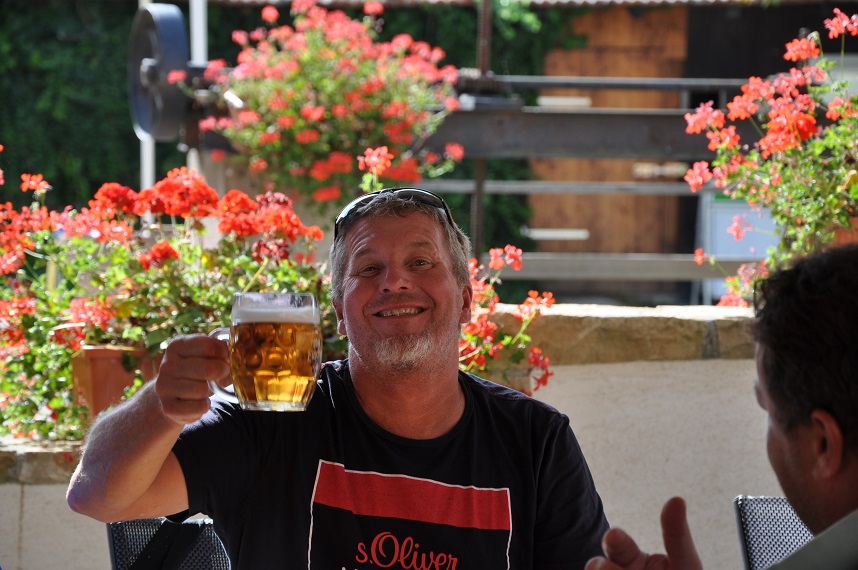 Next morning we awoke to another fine day, and after a pleasant breakfast and settling our dues it  was off to the links. There were 26 of us today, and as the sun got higher that light breeze had picked up a bit. Shirley was on hand to distribute those sponsors goodies courtesy of Ultra Sun and Focus Water as well as taking our contributions to the birdie pot , as well as insuring groups went out in time and were aware of some local rules  –real multi-tasking !

Today I was out in the third flight and following a rather erratic start on Hole 1 , I settled into a rhythm , though my flight buddies took a little longer to get into sync with their games, but by the fourth we were cooking on gas ( mostly). Mid round snack  and Shirley again hat switched hats and this time we were supplied thanks to the clubhouse with crusty bread rolls containing various   fillings  as well as a choice of fruit and drinks. The  next nine holes went by with some steady play ands my putter was playing ball –so to speak. Just the 14th proved to be the only blob of the day. 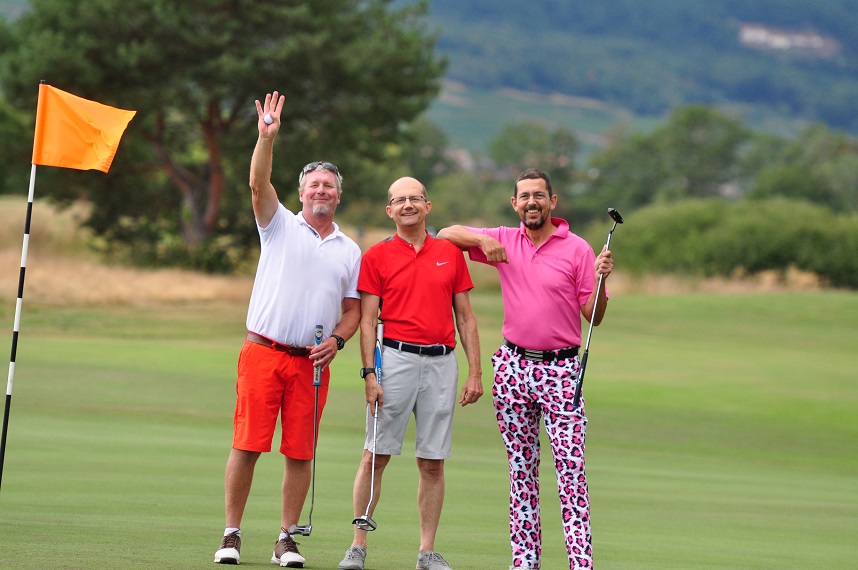 The Par 3  16th was the hole with the action today and in normal years this would have been the hole in one competition tee , where prizes over previous years have been a Raleigh E bike and then replaced with a week at La Cala Golf resort , Mijas,Spain . But this year there was just the reward of writing down a 1  on the card as well as the possibility to put a hole in your bank balance after buying the drinks back at the clubhouse. Well , this golfer just managed a Par , however just two flights back there was a certain Australian that for the first time in his life managed the perfect score and a five pointer also. Congratulations Dick !! 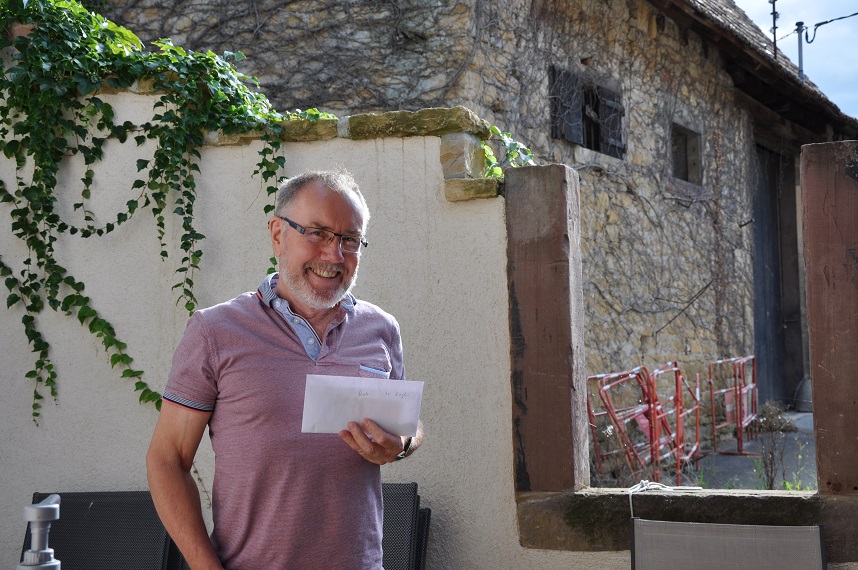 Back in the clubhouse showered and changed we all slowly gathered to regale each other of our various adventures and the club house served us a cornucopia of delights in  a served buffet, as well as offering some regional wines. As mentioned above  Dick very kindly stumped up for the drinks for which we were all grateful and could toast his Ace.

Birdie pot time and there were a few of them today , although proceedings were delayed a little due to an oversight and so as not to deprive one South African patron of his CHF  11  there had to be an envelope reshuffle. Prize giving , and our sponsors Orator, Vom Fass, Golf center Zurich , and Tomahawk Steak House  had once again  given  generously . Category 1 saw Kenny coming in in true PGA style with a blistering 34  brutto , 44 netto off a playing handicap of 12  taking top spot  followed by Jonathan on 42 netto and Mr Trousers  on  38 netto . Jay was wearing a particularly spectacular outfit today. Category  2 and  Andre  topped the winners podium with 42  points  and Francios and Myriam  being runners up. Then the  last Category and I am proud to say ,  Dawn romped in with 44 netto  and has subsequently been cut  8 strokes. It was an emotional moment and for me the crowning point of what had been a very successful and enjoyable day. 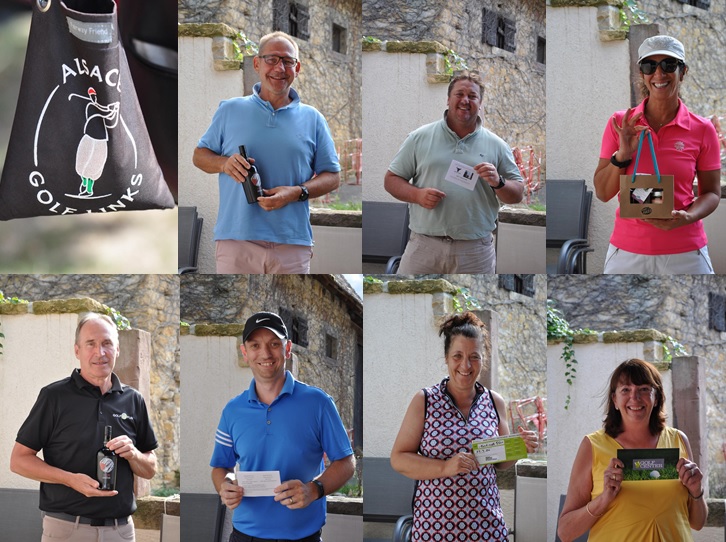 This golfer managed 36 points – still  18.5 ! Close oh so close ! Once again  congratulations to Dick and indeed  to all that took part today . Many thanks to Shirley for her fantastic help , to Nora  for the photos and  all the organisation as well as to Daniel for his behind the scene assistance. Also to Alsace golf links for making us feel so welcome once again and for supplying all the scrumptious Alsatian fare.

Looking forward to seeing as many of you as possible at Waldkirch on Saturday 26th September where we will be treated to a dinner, which for the last time will be subsidised by G4F main sponsor for many seasons. Many thanks Nicole. 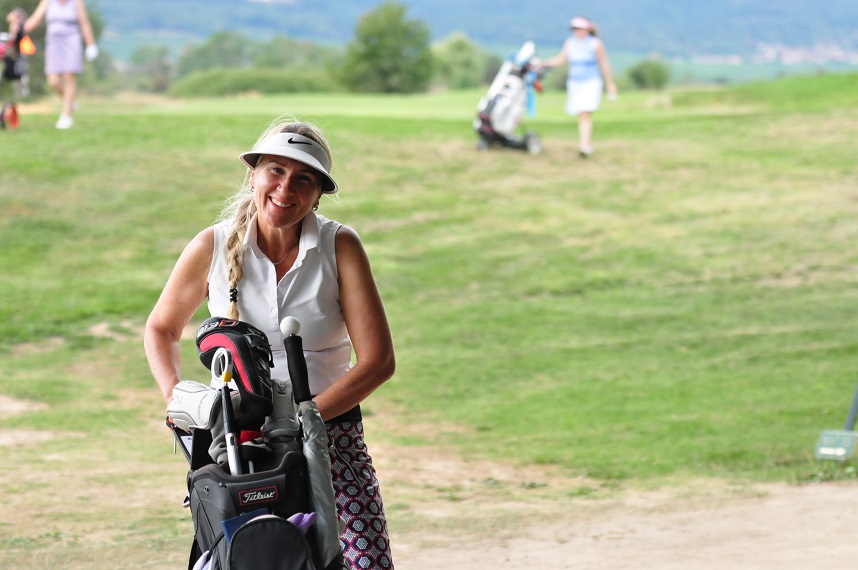 Happy Golfing to you all !!

Peter Martin, Hopeful Tiger 2020 and beyond!