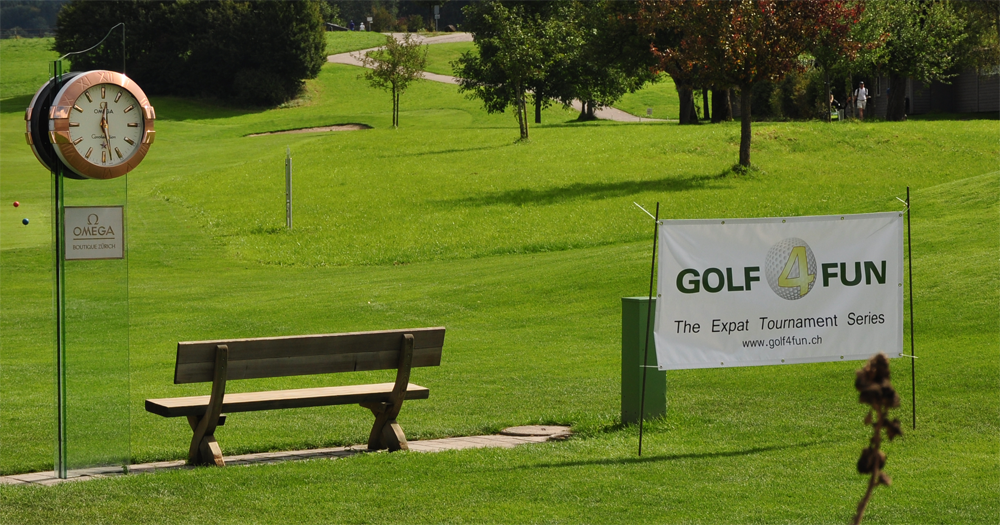 Its always with a tinge of sadness that we gather for the final tournament of the season, as we acknowledge that the regular golfing season is drawing to a close, and for some of us despite all our efforts (well this golfers anyway) that ones handicap had not moved in the right direction. However it is a good time to come together and celebrate all those happy times spent in each others company over the year in pursuit in getting a ball in a hole.

This year saw 39 of us negotiating the orange course at Waldkirch competing for an array of tremendous prizes donated by our numerous sponsors, as well as the culmination of crowning the overall seasons champions. Things at the top of the respective leader boards were tight going into Saturdays match.

As for a majority of Golf4Fun events the weather was playing ball, albeit slightly autumnal, and the weeks earlier rains meant little roll on the fairways and the brutal rough was going to challenge the field.

Tee 1, Shirley and Tina on hand to check correct handicaps as well as sharing out some of our sponsors goodies with Ultra sun , Focus water and the Stamford logo ball. Mid round snacks were also dispersed together with some final words of encouragement, Oh and yes Local rules . 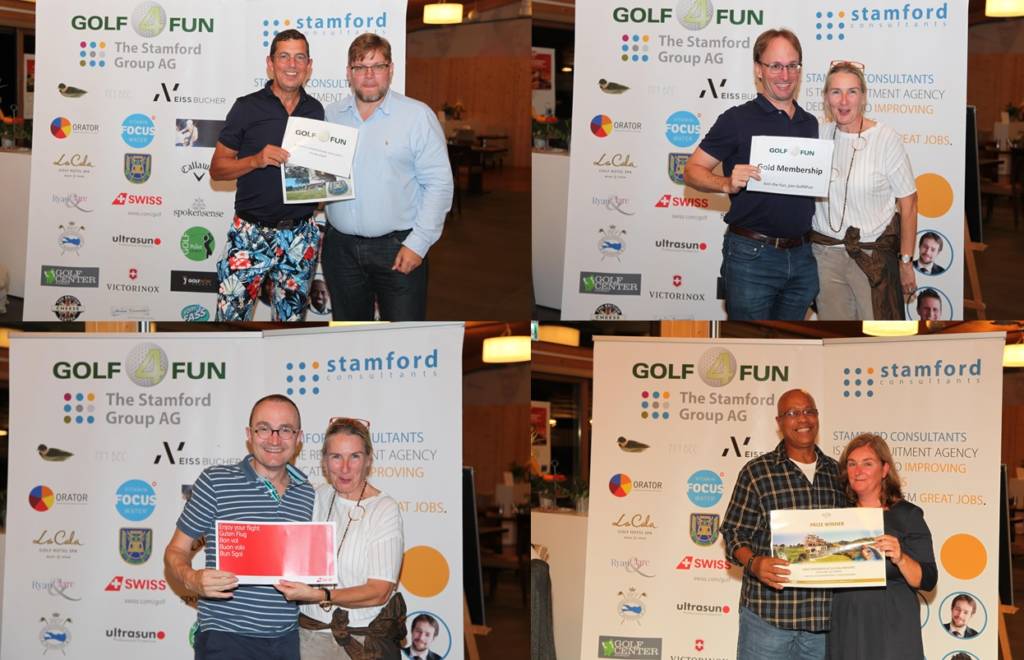 The dream team flight of Freddy, Carlos and myself were finding it tough to find a rhythm in our swings, with varying results. Still with all the competition holes on the back nine we had time to turn things around. Dreams for us however quickly turned into some more nightmarish moments, and so longest drive saw Irene and Dick at the top, Zbynek picked up Orators Aim a.k.a. nearest the pin, whilst the hole in one week in La Cala golf and spa resort in Spain rolled into the season final raffle.

It was a weary trio that came off the 18th, no doubt captured by our much appreciated resident photographer Roy. Our spirits were lifted though with Shirley and Tina handing out an ice cold beer.

It became evident as flights came in that bar a few stand out efforts this had not been the highest scoring of events, with the course really baring its teeth. As it was season final we were to be treated this evening to a sit down buffet, all thanks to the generous subsidy of our main sponsor Stamford, so a big thank you to Nicole. 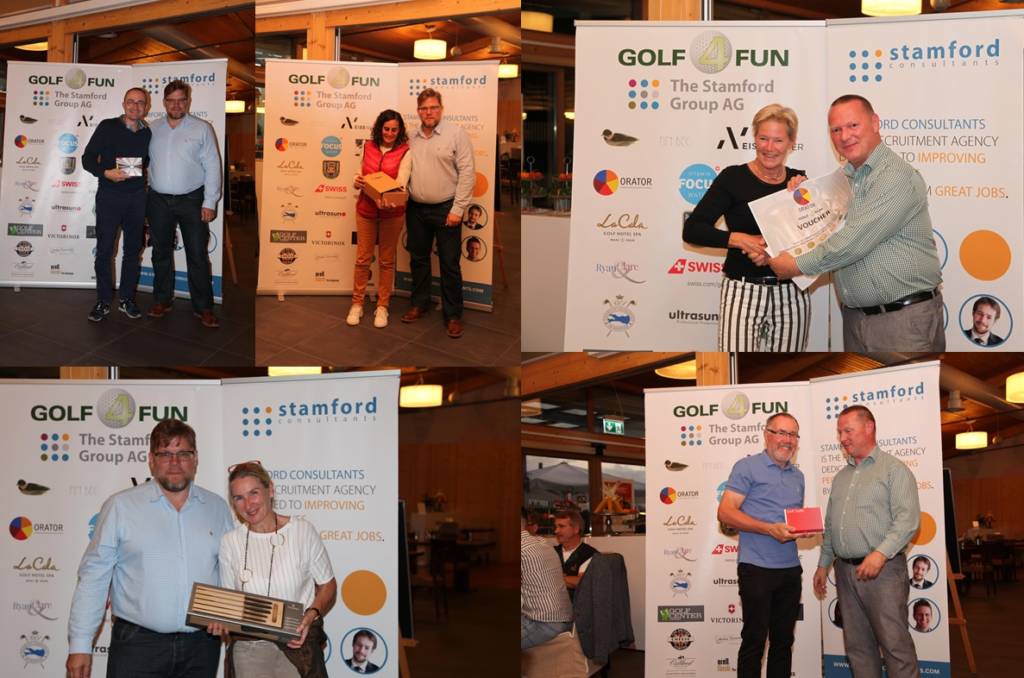 The kitchen at Waldkirch did themselves proud with a three course triumph. Loved that pork crackling! Prize giving for the days tournament was held , with all the rankings available on Golf4Fun Before coffee we had the chance to sample the wares of Christian and Eva Orator who have been a sponsor now for a number of years producing some quality alcoholic spirits from their facility in Pfungen just outside Zurich. In fact there is a Champagne tasting and distillery tour due on November 17th. Check out the details on the Golf4Fun website. So with everyone fed and watered it was time to settle in for the announcement of the seasons overall winners. Brutto award to Mr Trousers Jay , Jonathan topped the Tigers board and a very proud husband saw Dawn pick up the Rabbits award. Congrats also go out to Thomas Ravelhofer for winning the 6 hole championship as well as to Dick for claiming the individual knockout crown in what I have been told was a thriller of a match played at the Thracian cliffs resort in Bulgaria.

Raffle time – and with three prizes in a row going to Peter S we wondered if Daniels computer had been hacked . When it came time for the top prize of that week in La Cala come next February there was a roar for the popular winner Tim Hilts, who really has made superb progress this year and so a deserved winner.

It was a celebration indeed, although one that saw us reflect on the recent passing of our friend and fellow golfer Mark Broughton. All that I can say is that Golf4Fun and all that met him are all the better for having known him. Lets celebrate that.

Season 2019 comes to an end but there are still many events to come as the cloak of winter covers us . Highlights are first up whiskey tasting at Von Fass in Zurich on October 18th. There is the first of the short game championship qualifiers at Golf Point Urdorf come November 9th with round two on November 23rd. 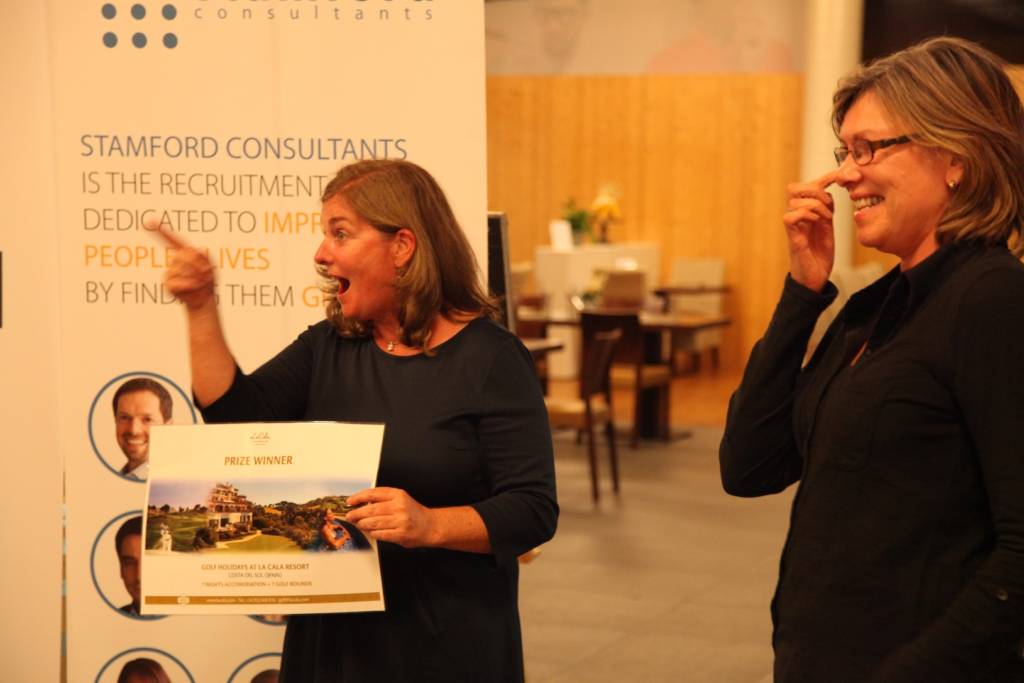 But again for all the details check out the Golf4Fun website.

Thanks to all our sponsors for their continued generous support and making season 2019 such a success. Also to helpers Shirley ,Tina, Bea and Irene as well as to Daniel in the background doing so much . Finally to Nora for all her tireless organisation and chicken control.

This golfer is already anticipating a glorious 2020 season,as well,as I keep saying , is my bank manager.

Peter Martin, Hopeful Tiger 2019 …and beyond!